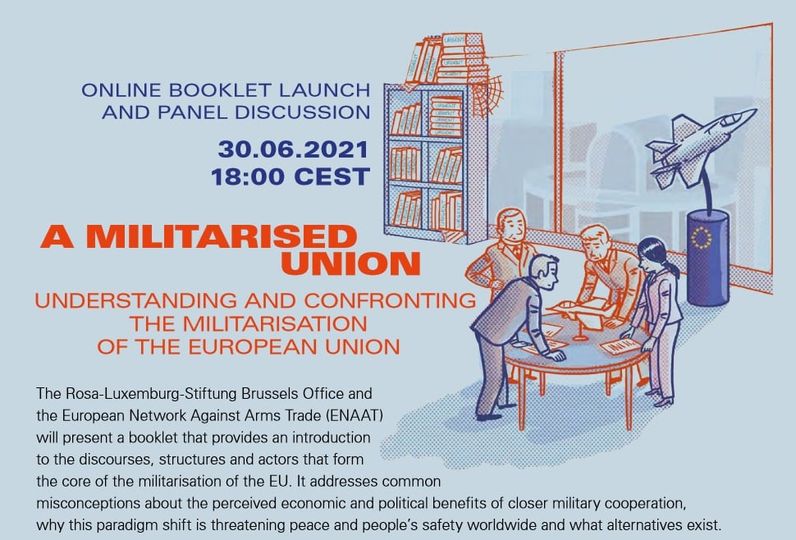 Online booklet launch and panel discussion 30 June 18:00 – How is the European Union preparing itself for the challenges that lie ahead? With – Özlem Alev Demirel (The Left) – Laëtitia Sédou (European Network Against Arms Trade) – Bram Vranken (Vredesactie).

How is the European Union preparing itself for the challenges that lie ahead? How will it deal with the climate, economic and social crises we are facing? What steps is it taking to tackle the root causes of these crises?

Answers to these questions are vital to those living within and outside the EU. Disturbingly, the EU and its Member States have taken significant steps in recent years to divert attention and resources from civilian to military priorities. Only a couple of years ago, warnings about an EU military-industrial complex seemed far-fetched; it is now becoming a reality of which the EU is increasingly proud.

The Rosa-Luxemburg-Stiftung Brussels Office and the European Network Against Arms Trade (ENAAT) present a booklet that provides an introduction to the discourses, structures and actors that form the core of the militarisation of the EU. It addresses common misconceptions about the perceived economic and political benefits of closer military cooperation, why this paradigm shift is threatening peace and people’s safety worldwide and what alternatives exist.

Although European governments claim not to export arms to countries at war or those violating human rights, European arms are sold all over the world with very few restrictions. European weapons are often exported to dictatorships or to countries at war. Groups from the European Network Against Arms Trade are discovering and exposing these deals.

We want to use the occasion of publishing this booklet to take a look at where we stand after the adoption of the European Defence Fund and the EU Peace Facility and a failed EU Common Position on the exports of military technology and equipment. We invite you to discuss with us on how we can effectively oppose this development and what matters in the coming years. What role does the work in the EU Parliament and that of social movements and civil society organisations play in this?