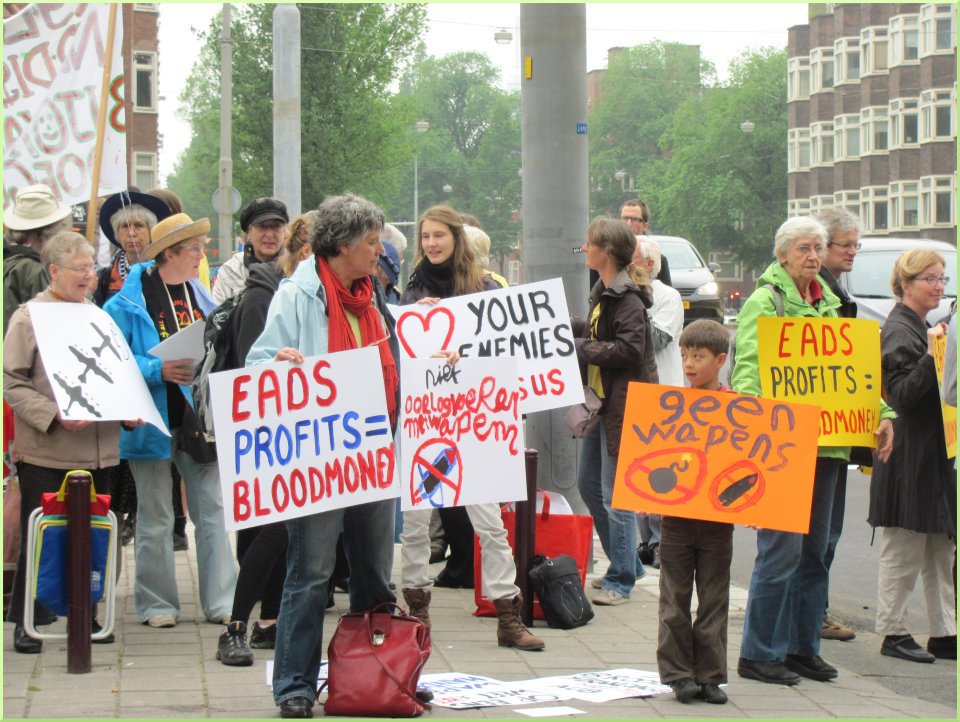 May 27 the annual shareholders meeting of Airbus (formerly EADS N.V.), the biggest military and space company in Europe, will take place in Amsterdam. Peace groups have a long history of protests at the event. This has created an atmosphere which was recently described by Airbus CEO Tom Enders: “Working in the defence industry has a bad reputation in several European countries. Many see it as a kind of dirty industry.” Despite this bad reputation and a shrinking military market in Europe, Airbus revenues grew considerably in 2013.

Airbus is profiling itself in North America, “a market to big to ignore,” according to CEO Enders. Recently Enders spoke at the Atlantic Council in Washington, where he presented Airbus’ U.S. efforts and promised new acquisitions at a meeting awash with the elite from U.S. Defence circles. He praised the US for its procurement policy, although could not resist mentioning several times how much he would have liked to sell tanker aircraft to the US armed forces, a deal however which, after a long struggle, went to arch rival Boeing. Enders used this high level podium also for his favorite topic: blaming European governments and institutions for not being supportive enough to the military production of Airbus. Earlier, Enders criticized the European capitals not enabling Airbus to develop a mature drone capability. At this Washington meeting, Tom Enders received the Atlantic Council Distinguished Business Leadership Award.

Airbus still is a major participant in the French nuclear force. The company also plays a major role in conventional arms exports. European and North American countries are its traditional customers. But Airbus makes clear that its key markets are broader, and include Australia, Brazil, India, China, the Middle East and Russia (the latter obviously a problematic market at present).

Saudi Arabia, which is exchanging oil revenues for weaponry, is a prominent client. It is close to a finalising a multi-billion dollar arms deal, buying Eurofighter Typhoon jets which Airbus builds together with BAe Systems and Finmeccanica.
Riyadh is a controversial destination for European arms export, notably for Germany. This was clearly visible during the last arms export policy debate in the Bundestag, the German Parliament and also in a statement of the German vice prime minister Sigmar Gabriel who intents to sanction the sale of battle tanks to Saudi Arabia. Gabriel also said he intents to stop an Airbus arms deal to Saudi-Arabia; General Dynamics had chosen Airbus daughter Optronics to deliver 2000 Precision measuring instruments for target acquisition, build in new light armoured vehicles (LAV) for Rhiyadh as part of a ten year $10 billion agreement with General Dynamics’ Canadian subsidiary. The Airbus deliverance is worth €500 million. Not everybody is convinced of Gabriel’s resolve and some fear that no concrete steps will be taken. But the German Handelsblatt noted frustration coming out of the Airbus offices in Germany already.

On sales to the Middle East, Campagne tegen Wapenhandel wrote earlier about Airbus arms sales to Qatar. Newest on the Airbus military equipment to the Middle East is a CASA C-235 aircraft purchased second hand from Spain. The plane was converted to gunship configuration for the Royal Jordanian Air Force, opening a new market. It was shown at the Special Operations Forces Exhibition & Conference (SOFEX) early May in Jordan.

The 12 billion plus revenues of Airbus on arms in 2013 are made across the world, but China, the other important growth market, is often mentioned, mainly because of helicopter sales. Besides direct gains from the Chinese military budget, Airbus earns from the arms race in East and Southeast Asia, which is a reaction to the growing military spending by China. One of the examples is a sale to the Philippine Air Force (PAF). It is expected PAF will receive, among aircraft from other companies, three medium EADS/CASA-Airbus Military C-295 medium lift aircraft within two years time. Asia in general is an important market for U.S. companies but also for European ones like Airbus.

Airbus’ sales are in both growing and shrinking markets all around the world. Combined they resulted in a 4% net military revenue growth in 2013.