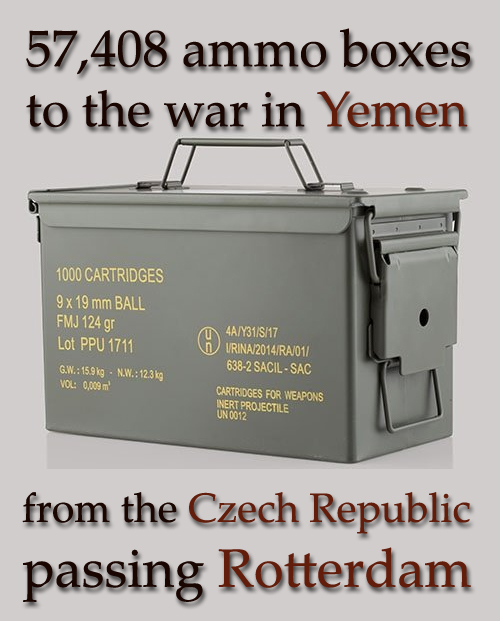 Large quantities of ammunition are passing through the Netherlands in 2018-2019. Remarkable is the massive transport of 9 mm small arms ammunition from the Czech Republic through the harbour of Rotterdam en route to the United Arab Emirates (UAE), one of the major parties involved in the Yemen war.

When the UN introduced its trade register on conventional arms in 1991, one of the advantages was that imports and exports could be compared. In this way, underreported arms exports or imports could be corrected by the facts given by the importer or exporter on the other end.* Transparency on arms transit, such as provided by the Dutch government, gives extra information for control. Very useful when an arms transfer takes place between not-so-transparent parties.

The Netherlands reports on the transit of individual orders passing its territory in a spreadsheet which is monthly updated. It gives a description (including calibre), quantity, country of origin and of destination, the mode of transport and where the weapons leave the Netherlands. It is unclear how comprehensive these reports are, but the availability of information is a substantive step needed to control arms exports. Since 2005, over 20,000 entrances are given of which most by sea and air (some in combination with rail or road transport). But information alone is not enough to limit the arms trade – as the state of affairs in the Netherlands shows. Without political will to implement a restrictive policy, information does not help.

In 2018 and the first two months of 2019, 184 transits of shipment larger than 10,000 items passed the Rotterdam harbour and 76 million pieces of ammunition did leave the same harbour. Forty of the shipments had a size of one million items or more, in all cases ammunition. The largest was a shipment of over 50 million to the United Arab Emirates (UAE).

Shipments came mainly from NATO/EU members such as the Czech Republic, Italy, Poland, Lithuania, Sweden, Turkey, the UK, and the US, but also from Brazil, China and South Africa (see table 1). Destinations were for example Guatemala, Togo, UAE, and Ukraine. The US exported 2.4 million small arms bullets to this last country, entangled in a civil war (see table 2).

But lets focus on the war in Yemen. The Netherlands has a restrictive policy on the direct deliverance of military products to Saudi Arabia, Egypt and the UAE because of this horrible conflict on the Arabian peninsular. This restriction however excludes the major part of Dutch military production: components for lager weapon systems assembled at production facilities elsewhere in the EU or NATO + Australia, Japan and South Korea. It also excludes transit without transshipment of arms exported by EU and NATO+ members through Dutch territory. This makes the Dutch and its infrastructure complicit in enormous shipments to questionable destinations.

In case of the bullets to the UAE the shipment came from an ally and was transited through the Netherlands without transshipment and as such, according the Dutch government (referring to its own rules) there are no mechanisms for control. Would there have been transshipment, a transit license would have been required though.

The question firstly looms how the landlocked Czech Republic can export arms trough Rotterdam harbour and continuing to the Emirates without a shift of the cargo to another means of transport.

Second: The Dutch Minister of Foreign Trade wrote that if an ally has an export control mechanism similar to, or in line with, the Dutch system, the Dutch government will not examine the shipment again. She also answered to questions by the Socialist Party and the Greens: “When from an European Union member – like in the case of the actual transaction – it is already reviewed to the eight European Union criteria.” It is difficult – even impossible – to explain the Czech interpretation of the EU common policy on arms exports here.

The Dutch Minister stated that she: “seen the kind of arms (ammunition) can not irrefutable exclude use in Yemen.” But also answered she cannot pressure other EU countries to keep to a more restrictive export policy. However the Dutch government itself has some tools to impose an ad-hoc license requirement on the export of goods that are otherwise free to transit through the Dutch Territory, when the minister for Foreign Trade and Development Cooperation deems it necessary in order to protect the essential interests of national security.

Stop Wapenhandel cooperates with the Czech organisation Nesehnutí which has raised the Czech exports to the Emirates with the Czech parliament. Ammunition is not the expensive or technological advanced part of arms trade, but is, even more than the weaponry, the fuel on which wars and conflicts thrive. European anti-arms trade organisations use the information available to work together to end the flow of arms to the devastating war in Yemen. They do so even when governments are hiding behind regulations.

* In 2017 the Netherlands for example reported exports of 15 fighter aircraft to Jordan, while Amman reported none of those.