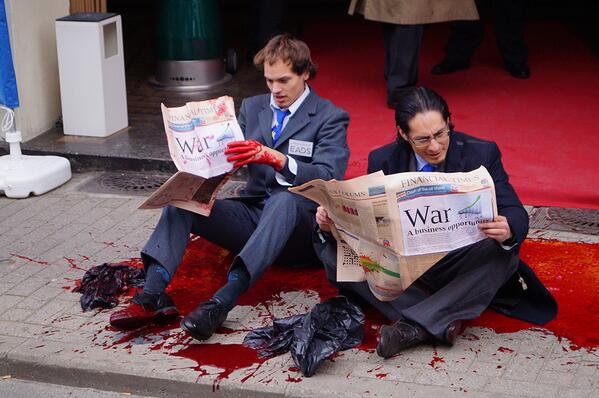 Not only to provide security but first and for all because the Commission considers the arms industry as a great technological innovator and job motor. Therefor, according to the Commission, military research should be stimulated with EU money and export regulation (“unnecessary red tape”) should be limited to a minimum. There was even the proposal to use the Commission as ‘launching costumer’ for new military products. When reading this Communication one can only conclude that the lobby of the European defence industry, for example by the AeroSpace and Defence Industries Association of Europe, has been very effective.

(At the picture: Activists with blood on their hands in front of lobby conference)

The claim of the Commission that the defence industry strongly contributes to innovation and jobs is based on figures from the industry itself. Other figures, based on scientific research, do not show evidence of the military industry as a economic motor. The spin-off effect of the last century, when military technology brought innovation to civil technology, is in this digital age replaced by the use of more generic technologies as the basis for both civil and military products.
Apparently the Commission is aware of this; it stresses the importance of dual use technology. For research into dual use (products with both a military and a civil application) the EU has set aside 3,8 billion euro for the coming 7 years under the Horizon 2020 ‘Secure Societies’ program. There is also a stimulation program especially for the defence and dual use sector to help them to make better use of Regional Structural Funds.

When the Communication was published, hopes were high with some in Brussels that this would be a breakthrough for a European military and arms industry policy. The European Parliament subcommittee on Security and Defence called for making “the EU a relevant global actor and security provider with real strategic autonomy”. But before the EU defence summit took place in December 2013 it was clear that EU member states had no intention to hand over any power over military and arms industry to Brussels. The foreign and defence interests of European countries are simply too far apart and often even contradictory. However, Member States did recognize a need to ‘fill gaps’ in the EU defence capacity. Notably during the Lybia war there was frustration within European armed forces that for some capacities they were dependend on the US. As a result, one of the outcomes of the defence summit was to task the European Defence Agency EDA, a body under High Representative for Foreign Affairs and Security Policy Catherine Ashton, with four capability programmes in the fields of Air-to-Air Refuelling, Remotely Piloted Aircraft Systems (commonly known as drones), Satellite Communication and Cyber Defence, where Europe feels it is lagging behind. 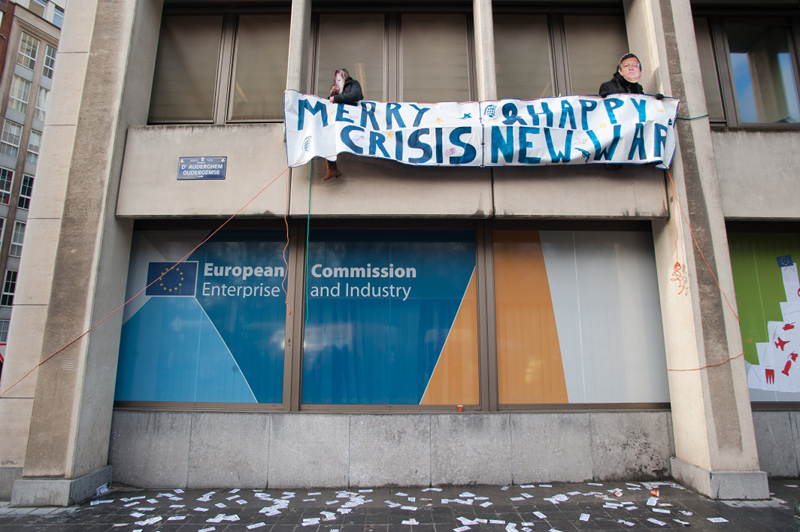 (At the picture: activists hanging banner at DG Enterprise and Industry during december defence summit)

Meanwhile, peace activists protested against the defence activities of the EU, with Belgian peace groups Vredesactie and Agir pour la Paix in the lead. During the defence summit, they cheered up the boring bureaucratic Brussels bubble with street theater, banner drops and a blockade of the posh EDA conference “European Defence Matters”. The defence lobbyists and pro-military MEP’s had to wade through a pool of (fake) blood before they could enter their conference building.
On occasion of the European Parliament elections Belgian, British and Dutch peace groups published a report on the voting behaviour of Members of the European Parliament on issues such as drones, military research and the pollution of the development aid budget by spendings on military missions. The European Network Against Arms Trade ENAAT published a commentary on the annual EU arms export report, based on the research of the Italian peace group Rete Italiana per il Disarmo. ENAAT also runs a database on European arms export figures, where exports – as far as reported by governments – can be searched on weapon type, export destination and exporting country.

As the European Council intents to have regular defence summits in the years to come, there will be lots of decisive moments where we need to make our voices heard in Brussels. The military conflict in the Ukraine will be used as a new argument for the increase of military budgets and EU support for arms industry research. Already the Commission is preparing a proposal to make the arms industry directly fundable from the EU research fund Horizon 2020, where it is now limited to what is called ‘security research’.

The defence industry has a very strong lobby with the European Commission and wants money and contracts. At a EDA conference in March a representative of arms company Airbus (former EADS) declared that concrete programs with additional budgets are necessary. “Research and development is only worthwhile if we have the ambition to build the next generation of products.”