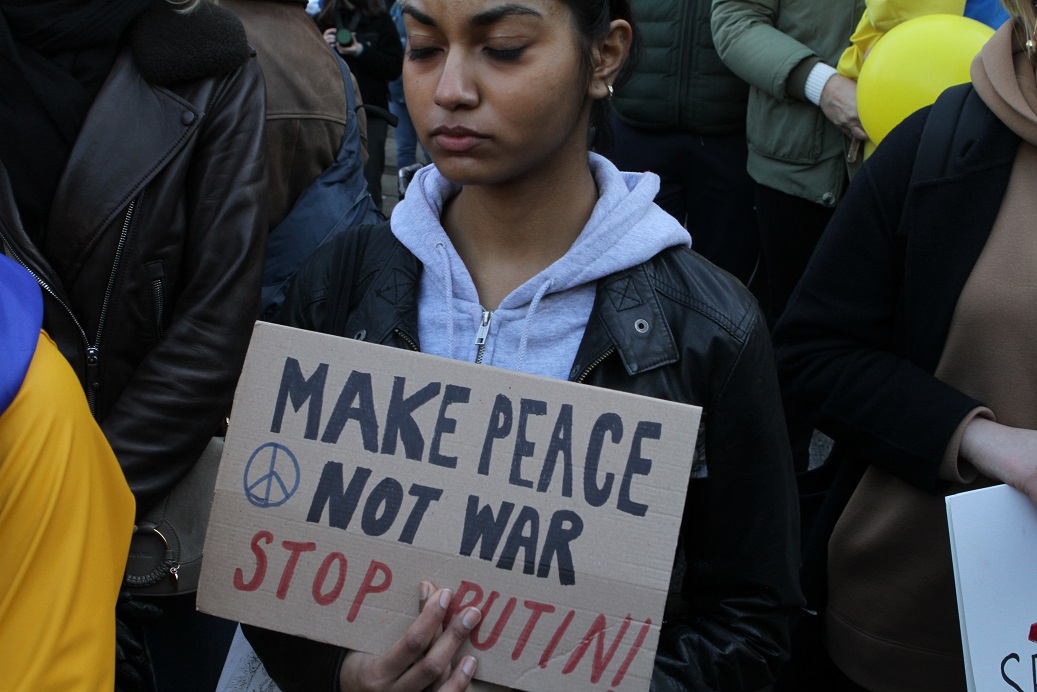 The Russian aggression against Ukraine makes us very angry and sad, and there is a general feeling of wanting to help the Ukrainians. Many European countries have decided to send arms to Ukraine for its fight against the Russian army. As understandable as this might be, response should not only come from the heart but also be based on analysis. The central question is: will sending arms to Ukraine help to end the suffering and offer a way out of violent conflict? We need to assess consequences, benefits, damages and risks of delivering arms into this war. Sending arms is not a quick way out of this horrid situation. Once violence has broken out, there is no easy way to stop it. Neither by military action, nor by sending arms, nor by non-violent action.

This is not the time for grand gestures, politically popular answers, militaristic language and macho behaviour. The risk of further escalation is real and needs to be averted at all costs, as we face the risk of a nuclear confrontation and the naked survival of humanity and of the planet is at stake.

Without claiming to have all answers, let’s consider some of the complex questions.

Putting more weapons into conflicts doesn’t bring them closer to an end, it changes the military balance and prolongs the fighting. Continued fighting leads to more dead and destruction and impedes humanitarian assistance but it might help creating space for desired political outcomes on the negotiation table. We should be clear about this and not mix up arms deliveries with bringing peace, it brings a change in power.

Supplying weapons may answer to a general feeling of injustice and make politicians look fierce but it should not end in the Ukrainians do ‘our’ fighting. The impact of small arms deliveries on a military victory for Ukraine is largely negligible. But it might delay Russian troops moving forward, undermine Russian morale and resources and postpone defeat. To really make a difference in combat big military systems such as fighter jets should be delivered, but that will certainly be considered full war participation by the Russians.

Arms deliveries crossing the Polish border have certainly caught Russian attention already. There is a serious risk of accelerated military effort to conquer the border area and close the border, which will make it much more difficult for refugees to leave the country.

Ending up in the wrong hands

There is the very real possibility that arms supplied fall into the hands of the other party in a conflict, in casu Russia, which would only increase Russia’s military capacities. In general, arms supplied to parties in armed conflict, in particular small arms and light weapons, often find their way to other conflict areas as well. Arms that have been used in the wars in Yugoslavia and Libya for example are still popping up in other armed conflicts, in particular in Africa. There is also the risk that arms end up in the hands of far right militias who are guilty of violent racism and hate crimes against LGBTQ+ persons.

Risks of handing out arms to civilians

Handing out arms to civilians often resulted in violent incidents between civilians and in domestic violence. The risk of arms staying with civilians after the end of the conflict, and the possible use in internal conflicts and crime, is also something that needs to be taken into consideration.

Supplying arms makes European countries a party in the war. Arms deliveries are not a one-moment thing; they often require instructors and spare parts. Little by little countries could be dragged into the war. Being a party in the war takes away credibility for an independent mediator role. It limits possibilities for diplomacy and negotiations.

The EU Common Position (EUCP) on Arms Exports sets out 8 criteria member states have to check against when taking a decision to issue an arms export license. These criteria include that “Member States shall deny an export licence for military technology or equipment which would provoke or prolong armed conflicts or aggravate existing tensions or conflicts in the country of final destination” (criteria 3), as well as provisions on human rights (criteria 2), the preservation of regional peace, security and stability (criteria 4) and avoiding the risk of diversion of arms supplied (criteria 7). Arms exports to Ukraine are not in line with these criteria, but governments argue that this is a ‘extreme situation’ where a country under attack has the ‘legitimate right to self-defence’. Nowhere in the EUCP is stated that this can overrule or nullify the criteria but this new interpretation might set a new standard. Although the war in Ukraine is indeed an extreme situation, further lowering of already shaky standards will hamper arms control for many years. One should also be wary of a decrease in transparency, as some EU member states’ governments already have decided to keep arms exports to Ukraine secret, avoiding parliamentary control and public debate.

Battle outside the battlefield

Pacifism or antimilitarism does not mean being passive. It means looking for other ways to resist. Supplying arms might not be the best way to support the people of Ukraine, and it is not the only way either. This war is not fought on the battlefield alone, but also in Monaco, the City of London, St. Petersburg and Moskow. There are many sanctions against Russia but not much idea about which ones are effective and which ones are pure revenge, harming more than doing good. There should be much more debate and research on the saction instrument.

There are also other de-escalating ways. Often pushed aside as a symbol of weakness, non-violence is an approach that needs to be taken seriously and has the possibility for more lasting effects than using violence. There have been acts of brave non-violent resistance by Ukraine citizens against Russian troops. Especially in a situation where many Russian soldiers have been lied to that they would be welcomed in Ukraine as liberators, non-violent citizens resistance can derange military plans. When troops are not motivated to fight it is not easy to reach military victory. This is not a pacifist idea but known to warlords since the age of Sun Tzu. Citizens resistance will make it difficult for the Russian troops to occupy Ukraine.

Similary hopefull is that people in Russia continue to take to the streets to protest the military invasion in Ukraine, at the risk of beating and arrest. Non-violent resistance does not mean there will be no violence, as the other side is using violence. Non-violence needs a lot of courage. It might not always be the best choise. But it certainly must be considered seriously. It is not naive to look for non-violent ways to end a war. It is naive to think that weapons will resolve conflicts. In a situation like this, with so much suffering and looming escalation, we have to do better.