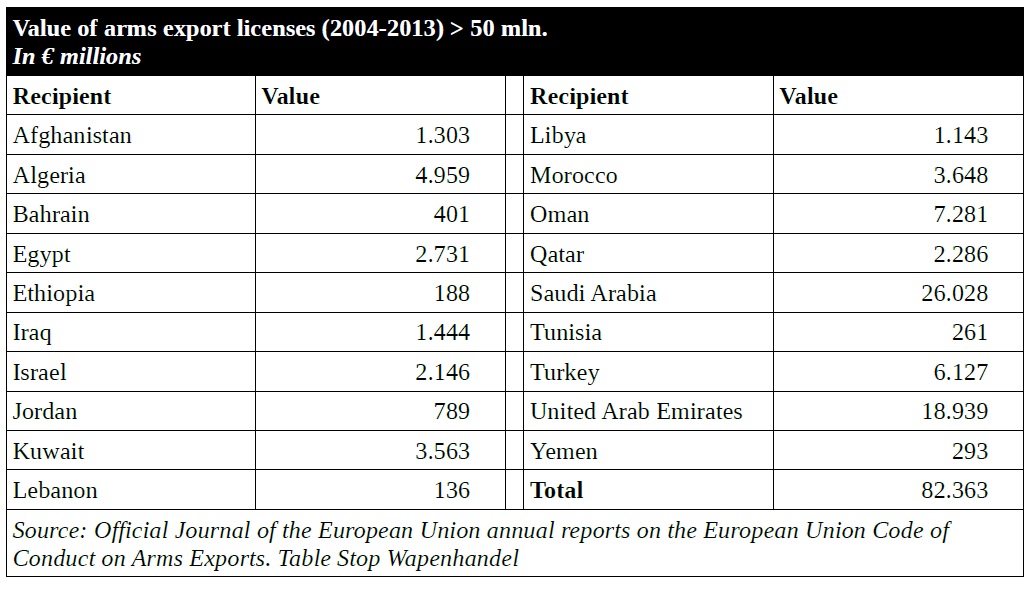 In the last weeks, news has been filled with stories about the ‘refugee crisis’, tens of thousands of people from the Middle East and North Africa desperately trying to enter the EU. Escaping from a region suffering from armed conflict, repression, poverty and the effects of climate change, they are met by governments trying to keep the borders as closed as possible. Seeking increasingly dangerous routes to avoid border patrols, over 2600 people have died trying to cross the Mediterranean Sea so far this year.

While the EU refuses to take any responsibility for its part in causing the tremendous problems driving people from their homes, the continuous flow of arms from the EU to the Middle East and North Africa keeps on fuelling the chaos in this region. In the last ten years with export figures available (2004-2013), arms export licenses for an astonishing value of over 82 billion Euros have been granted.

The Saudi Arabian dictatorship, which also heads the coalition bombing Yemen  and has been arming and financing Islamic extremists, is the largest buyer of European arms next to the USA.

The military regime of Egypt, which has been accused of committing crimes against humanity, nevertheless remains an important client of the European arms industry. In the course of this year the UK has quietly resumed several multimillion-pound arms deals with Egypt. And just last week the Dutch government granted a 34 million euro export license to Thales Nederland for the delivery of radar and C3-systems, to be used on corvettes imported from France, , even though it admitted that grave human right violations take place in Egypt.

One of the reasons given by the Dutch government for granting the export license to Thales is the role the Egyptian navy plays in stopping ‘illegal’ immigration to Europe. This illustrates that, as cynical as it is, the same industry that fuels the causes of the refugee crisis also profits from trying to stop the refugees. As we noted before, border security becomes increasingly militarized. Arms and security companies are salivating at the prospects of serving a market estimated to generate revenues of 14.6 billion Euros in 2015.

Next week, the arms industry and representatives from militaries and governments from all over the world gather in London, where DSEI, one of the world’s biggest arms fairs, takes place. Tomorrow, activists take aim at the hypocrisy of the UK government and the arms industry under the banner ‘Freedom of movement for people not weapons‘.

As Andrew Smith of the Campaign Against Arms Trade says: “The refugee crisis is showing us the human cost of war and conflict. It is shameful that the UK government is rolling out the red carpet for arms dealers and despots – helping to fuel conflict across the world – at the same time as it is refusing entry to refugees fleeing wars.”