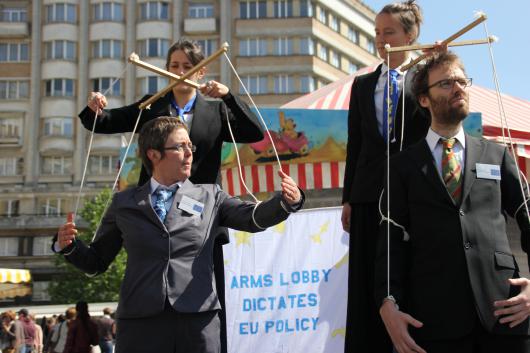 Last year European Commissioner for Defence Industry and Space Thierry Breton set up the ‘Commission expert group on Policies & Programmes relevant to EU Space, Defence and Aeronautics Industry’, bringing together representatives of 59 large European arms companies, research industries and military industry organisations. With this the longstanding wish of the arms industry to start a permanent dialogue with the Commission has been granted, building on years of increasing influence on EU policies.

“This expert group will provide a forum for discussion and high-level aggregated inputs relevant to programmes, policies, and measures concerning the space, defence, and aeronautics industry”, according to its registration as a commission expert group. Its members include representatives of large arms companies (Airbus, Dassault, Indra, Leonardo, Rheinmetall, Saab, Safran, Thales and others), research institutes such as Fraunhofer and FOI (Sweden) and industry lobby organisations, including the AeroSpace and Defence Industries Association of Europe (ASD) and national plaforms like the Dutch NIDV (Netherlands Industries for Defence & Security).

According to Breton and his Commission Directorate General for Defence Industry and Space (DG DEFIS), which “may consult the group on any matter relevant to the space, defence and aeronautics industry”, with “its importance for EU strategic autonomy, this segment of industry has specific characteristics that need to be considered to design appropriate policies.” While there have been concerns over industrial influence on EU policies in many policy areas, it is especially worrying that an industry gets such an open door to lobby in direct dialogue with the Commission, masked as an advisory role, on policies it is bound to profit from.

The Rules of Procedure of the expert group promise a certain level of transparency, including publishing “the agenda and other relevant background documents in due time ahead of the meeting, followed by timely publication of minutes”, but so far it has taken over two months after meetings before minutes are published. The minutes of the first group meeting, in September 2021, show that the industry sees this group as a means for shameless self promotion. Participants voiced the “need for a wider recognition of the role of this industrial ecosystem in ensuring the resilience of society”, complained that, “in the face of strong ambitions of the US and China, the EU will lose competitiveness if ambitions are not set higher”, argued for “a better level playing field, especially for defence procurement” and talked about “the need for disruptive technologies to ensure long-term resilience and competitiveness.”

Similarly, in the first meeting of the subgroup on defence, the participating companies made sure that ‘access to finance’ was put on the agenda as the first main issue to be discussed, while the Commission guaranteed that it would give them opportunities to give input on upcoming initiatives.

Industry input was warmly welcomed from the side of DEFIS, with Director-General Timo Pesonen stating in the first group meeting that “many of the EU policies affect industry directly and indirectly. That is why we need a constant dialogue.” This ‘constant dialogue’ is something the industry has been pushing for for years, aiming for constant access to policy makers within the context of an official advisory relation. In December 2014, for example, ASD proposed to act as a platform for a permanent and structured dialogue between the Commission and industry. And in May 2020, in response to the COVID-19 crisis, again ASD suggested the establishment of a permanent European Security Board. With the start of the expert group a new step has been taken in this regard. The establishment of DG DEFIS, the start of the European Defence Fund (EDF) for military research and development of new arms and technologies, and the appointment of Breton as responsible Commissioner have opened up the gates for the arms industry.

Breton was controversially appointed as Commissioner in 2019, coming directly from the position of CEO of Atos, a French IT company deeply involved in the defence market. Since then he hasn’t repudiated his past and has remained close the military industry. In a letter from ASD, thanking him for taking part in its Board and General Assembly meeting in November 2021, the lobby organisation writes it is “very proud and happy to can consider you as ‘our Commissioner’”.

Not that this industry had much to complain about in the years before Breton of course. Through its dominant position in several ad hoc advisory bodies for the Commission and its extensive lobby – including many meetings with the Commission, organisation of roundtables with high ranking EU officials and a stream of advisory papers – it has been highly influential in shaping EU policies on for example funding for security and military research and border and migration policies. Embraced by the Commission and other policy makers as experts rather than lobbyists it has successfully pushed its own interests, raking in large amounts of EU and member states’ money spend on Europe’s increasing securitization and militarisation. Under the EDF alone about €8 billion is available for the period 2021-2027.

The growing involvement of the military and security industry in policy making itself goes beyond more traditional ways of lobbying. The industry is no longer only an outside actor trying to influence policymakers, it has become a partner of the Commission in the process itself and its own goal of maximising profits has become a driving force for the resulting policies. This is not only happening on EU level. The Dutch government for example invited 50 arms companies from The Netherlands to give input for its longterm strategic vision document ‘Defensievisie 2035‘.

With the famous farewell speech by US President Eisenhower in 1961 in mind, in which he warned of “the acquisition of unwarranted influence, whether sought or unsought, by the military-industrial complex”, stating that “the potential for the disastrous rise of misplaced power exists and will persist”, these are very worrying developments.