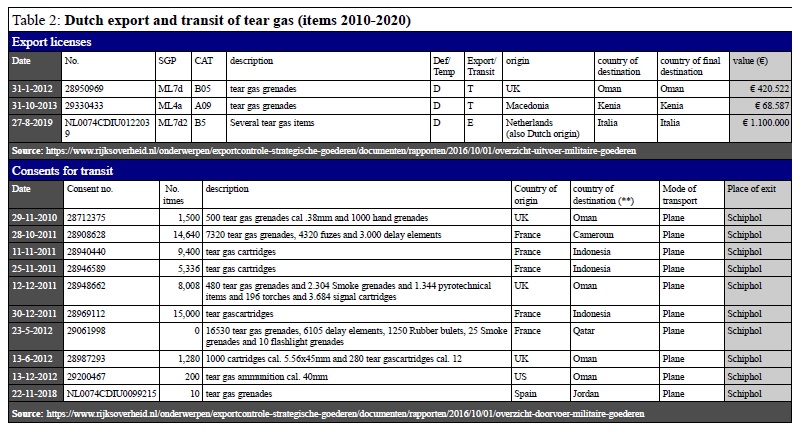 Annual reports on arms exports (see list) are published by almost all EU governments, but mostly not very timely. Reporting on arms exports is a mandatory part of EU transparency policy. Amazingly the reports concerning international trade are often published in national languages only. They also have different formats, sometimes caused by unwillingness to provide information, sometimes because differences of size of military industries and arms exports between EU countries. Only Germany, France and the UK are really large exporters of arms, smaller exporters include Italy, Spain, the Netherlands and Sweden. Knocking on the door now and then are Belgium, Poland and the Czech Republic. Different formats of reporting have a reason.

After publication of French figures Aymeric Elluin, Amnesty International France’s expert on arms trade notes that arms export policy itself does not change by reporting and transparency. US periodical Defense News reports that Paris signed €8.3bn worth of contracts, notably with European partners Belgium, Netherlands, Hungary and Spain, to-be-expected trading partners because allied NATO countries. The Amnesty expert however points out continuing deliveries to the Middle East: vehicles, tanks, and artillery for Saudi Arabia, missiles and launchers for Egypt, and Qatar. The UAE, involved in the war in Yemen, was an important client. Orderly listed facts give an overview, but what you pick from the facts makes a difference, as Defense News and Amnesty show.

Publication of Italian figures (I and II) led to respons of the Italian disarmament network. Egypt is leading with € 872 million of arms export licenses. Italian researcher Giorgio Beretta who studied the report pointed also at sales of 89,9 million and 105,4 million respectively to the UAE and Saudi Arabia (10 licenses including small arms, bombs and missiles). And at a thousand bombs, worth almost € 25 million, still exported from RWM Italia to Saudi Arabia despite suspension of sales to Riyadh. Leading news story in Italy however is the potential € 11 billion sale of frigates to Cairo announced by the Italian Foreign Minister. When an export license is provided the deal will only be officially reported in the annual export report of next year. Opposition cannot wait that long.

The European Commission itself also publishes annual figures on arms exports and licenses. It gives the most basic facts: a) the number of licences; b) value of licences and of c) arms exports; and the d) number of denials and the e) criteria from the EU common position on military exports motivating them. Currently Green MEP Hannah Neumann demands more transparency, because: “We have a right to know sufficient details about arms exports and be able to compare and assess the exports. With the information we currently receive from member states, this is not always possible.” Hence the European Parliament should be informed about “the exact type of weapon and the quantity exported, denomination of the munitions, the lot size and the specific end-user, revoked licences, and the value and duration of contracts regarding post-delivery services such as training and maintenance”.

The word ‘convergence’ is used over a hundred times in the amandments and convergence would certainly help in comparing information from different EU countries. But national reports are published earlier and have more information than the European report. Some countries even report more than the usual annual report (half year, individual licenses, transit etc.). The Netherlands reports individual arms and dual use exports and arms transits passing Dutch harbours on a monthly basis since 2005. A system which suits the Netherlands well, because 70% of arms exports are components or systems to be assembled on larger weapon systems. This is essential for understanding the Dutch role as a hub in the international arms trade (see e.g. the overview on tear gas exports, table 2) The same might apply for Denmark. Some countries publish nationally only what they also report to the EU and even that in a delayed way. The countries exporting most already have reports far ahead of the current EU report. A major step forward would be official translation for all national reports to leading EU languages, something the EU, with all its translation capacity, should be able to provide.

When police brutality in the US started against the anti-racist movement the NGO Vredesactie reacted to a report in US media on how Belgian developed weapons were used for crowd control: “Those are either foam-tipped projectiles fired from a 40mm launcher or a plastic projectile containing an inert powder and non-toxic chemical called bismuth that’s fired from an FN 303 air-powered launcher.” British organisations called to end exports of anti-riot gear and tear gas grenades to the US. Newspaper The Independent concluded from UK arms export records: “Ministers have issued export licences for such arms [tear gas, rubber bullets and riot gear] since 2010 to countries including Oman, the United Arab Emirates, Saudi Arabia, Qatar, Egypt, Brunei and Bahrain, all of which have had concerns raised about human rights.” Action is taken, not in Brussels, but at a national level, because arms exports differ by member state, as does the political history and space for action. Not the information an sich is important, but how effectively it can be used in political action.

Arms export reports show transactions with a delay often of more than a year. The weapons may already be used in war of to quell social unrest. Knowing which export licenses for riot control equipment were granted in 2018 is valuable information (according the EU report mainly France – generously handing out export licenses –, but also Austria, Czech Republic, Finland, Germany, Greece, the Netherlands, Romania, and the UK provided licenses for over one million Euros). But even more important is what is sold right now. Timely reporting, as asked in amendment 113 to the EP report, is thus essential. The ultimate goal of reporting is to oppose exports which are hampering development or have negative consequences for human rights or security, and this is something that cannot have delay.

Explosive Stuff is the two-weekly blog on arms export and prodcution of Stop Wapenhandel.

SUPPORT OUR RESEARCH AND ACTION WITH A GIFT