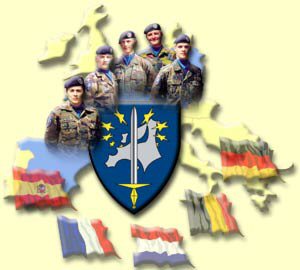 Frank Slijper sketches out arms industry lobbying in Brussels.
The process towards a European Constitution has largely come to a halt after it received a severe blow earlier this spring when a majority of French and Dutch voters rejected it in national referenda. Their “no” vote was a slap in the face for the governments that found out that their vision of Europe was not the people’s, however diverse their reasons had been. Unfortunately this victory has a bitter taste for those who reject the constitutional treaty because of its military dimension.

As things look now, the process of further militarisation of the European Union, and worse, the complete lack of democratic control of it, moves on regardless of the constitutional debate. An important reason for this is that military developments within the EU largely tend to happen behind closed doors. That means that crucial policy preparation meetings are mostly organised for “stakeholders” only – meaning defence community bureaucrats and arms industry representatives, with a few parliamentarians or “independent experts” who are mostly invited for window dressing.

For a long time, plans for a European military policy moved forward extremely slowly. It seemed that most people had accepted that the EU was there for economic co-operation while NATO – though under American dominance – was the relevant military umbrella for most of western Europe. This was the case until the early 1990s. Step by step, a “domestic” EU process has now gained speed. Over the last few years a number of military-related developments at European level have made a decisive impact on the course of action that is now followed by the EU’s executive body, the European Commission. Issues that were deemed likely to remain at the discussion table forever appear to have suddenly rooted: EU defence policy, common procurement, military research spending and the restructuring of the arms industry.

The incorporation of military issues in the EU Constitution and the creation of the European Defence Agency in particular are important milestones that have passed unnoticed for many people. Not so for the defence industry. Before a dozen generals and diplomats, three arms industry representatives were asked to give their view on Europe’s defence policies – while no one from civil society organisations was asked for theirs.

The arms industry’s involvement in the preparation of the European Constitution is in no way unique. Over the last few years the arms industry has constantly and increasingly pressurised high-ranking officials and parliamentarians, in Brussels and in national capitals, to adopt their policy proposals. This has met with no small degree of success. “The Group of Personalities”, “LeaderSHIP 2015” and other so-called task forces led by European Commission luminaries, have been essential in lobbying for the interests of the arms industry, ranging from increased spending on anti-terrorist technology, to the removal of arms export barriers.

The recent introduction of “security research” spending is a clear victory for the defence industry and opens new opportunities to extend the range of the previously civil European research budget into the military domain. Moreover, the advantage, both in access and strength, that the industry has over civil society in lobbying its interests also threatens the 1998 EU Code of Conduct on arms exports, which should forbid arms sales to human rights abusers or conflict zones. Export barriers tend to go down towards the lowest common denominator.

The close co-operation between the European Commission and the arms industry is a classic example of backroom policy-making, and a caricature of the way in which many people today look at European decision-making processes in general. It is therefore high time for a much more transparent European decision-making process – particularly on military matters – to involve civil society, instead of the current situation of overwhelming corporate power. Arms control organisations certainly should play a larger role in that too. After the French and Dutch rejection of the Constitution the opportunities are certainly there.

Frank Slijper is the author of The emerging EU Military-Industrial Complex; Arms industry lobbying in Brussels. This Transnational Institute report was produced in cooperation with Campagne tegen Wapenhandel (NL)