The Dutch and Belgian naval forces are deeply integrated. Recently the two countries decided to aim for identical new frigates for an anti-submarine role, according to a Memorandum of Understanding (MoU). The project is in its early stages. Belgium allocated € 1 billion euro’s to the project and the Netherlands € 730 million. The financial difference may reflect that Belgium wants to add an anti-missile missile shooter capability for its frigates as a part of the missile shield.

The missile shield, (not to be mixed up with the Star Wars or Strategic Defense Initiative, SDI, introduced under Ronald Reagan as part of the Cold War arms race, which made Russia implode economically and made the US end up with an enormous deficit), was made possible when neoconservative Bush jr decided to withdraw from the anti-ballistic missile (ABM) treaty and the focus shifted to smaller and more diverse units (ALTBMD) under the pragmatic President Obama.

Steps by those US presidents were followed by NATO member states, and played an important role in growing tension between Russia and NATO. Although NATO Secretaries General said time and time again that the system was not aimed against Russia but against North Korea and Iran, Moscow felt that it disturbed the nuclear balance. The missile shield undermines the possibility of Russia to use it’s ballistic missiles, the most important weaponry against a conventionally much stronger NATO. At the same time Russia sees NATO influence marching with great speed to the Russian border.

Russia responded to the development of the missile shield by assigning elements of it as nuclear target, as in 2000 at the opening of the Vardo radar station in Norway(see). But also more recently against the ALTBMD development under Obama. In 2015 the Russian ambassador in Denmark openly wondered if Copenhagen realised that the consequences of missile defence technology on naval vessels was that the Danish ships could be targeted by Russian nuclear missiles.

The missile shield is based in space, on land and at sea. The installations on land, such as in Poland en Romania, get the most attention. Identical weapons are stationed at sea. They are not just mobile, but also much less visible to the press and public. As one website reported: “Belgium has quitely made the decission to build frigates equiped with exoatmospheric intercepters that sound a lot like the US Navy Aegis system.”

The interceptors the Belgians want on their new frigates is the so-called SM-3 missile made by US Raytheon. Those are chosen as the main system of the missile defence effort against ballistic missiles with an intermediate range (IRBM, listed by Wikipedia from 11.500km to 500km). The SM-3 missiles are 6.5 meters long chunks of steel and weight 1,5 tons. They are fired with a speed of 16,000 km p/h. The price tag is between € 10 million and € 24 million each! Such missiles were prohibited under the ABM Treaty. They are now ready for launch in Poland and Romania and also in many naval vessels.

In October 2016 the Russians analysed the capabilities of the SM-3 missile and found that they can target missiles from submarines and ICBMs in flight, but also in the initial stage of the flight. According to the Russian general Poznikhir this leads to a “serious threat to the nuclear potentials of Russia and China,” as the SM-3 is able to hit missiles before the warheads separate, making the multiple independently targetable reentry vehicle (MIRV) ineffective. For the Russians, such a balance-disturbing missile is a serious treath. The missiles can also play a role against satellites in lower space with their predictable courses as easy to hit as sitting ducks. Being able to hit satellites is an important quality now the role of space in waging war increases.

But before a missile sets course to it goal this target must be identified, and here comes the Dutch role in the missile defence. For this you need a radar such as the Smart-L Early Warning Capability (EWC) system of Thales Netherland. That version of the SMART-L radar currently is provided to four Dutch LCF air defence frigates and will give the Netherlands a Ballistic Missile Defence (BMD) sensor capacity by 2020. ‘Unrivalled‘ coins Thales Netherlands the radar itself. It is praised in defence circles, and even South Korea – located in the American sphere of influence – has SMART-L installed on one of its ships. Total units around is 26 in several variants (see table). 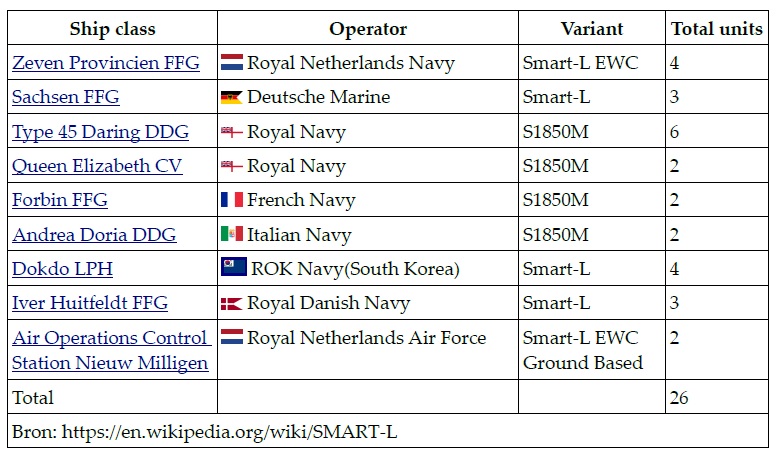 Belgium will equip its new M-class frigates with a shooting capability and the missiles themselves (provided others join, otherwise this will be too expensive), writes newspaper De Morgen. On page 148 of the Belgian Strategic Vision it is stated: “Our frigates will if needed be turned into a Ballistic Missile Defense system since they will be able to fire missiles to ballistic missiles outside the atmosphere. This will be in co-operation need to be done with radar systems that are capable of long distance detection on board, for example, an air defence frigate.”

This makes the combination of the Dutch and Belgium navy a fully fledged player in the missile shield. Dutch ships can track and guide, but not fire by themselves. The Dutch Minister of Defence stated in January 2017 that expansion of the strength by introducing a shooter capacity for the Netherlands may come later.

The US Naval Institute published an article which stated in February 2017: “The question facing the Trump administration on European ballistic missile defence is, should the United State go ahead with the next phase of the program or pause to let serious discussion with the Russia beginning on nuclear proliferation and arms control.” To refresh the good old arms control system seems the best idea, as missile defence might lead to a renewal of a nuclear arms race.