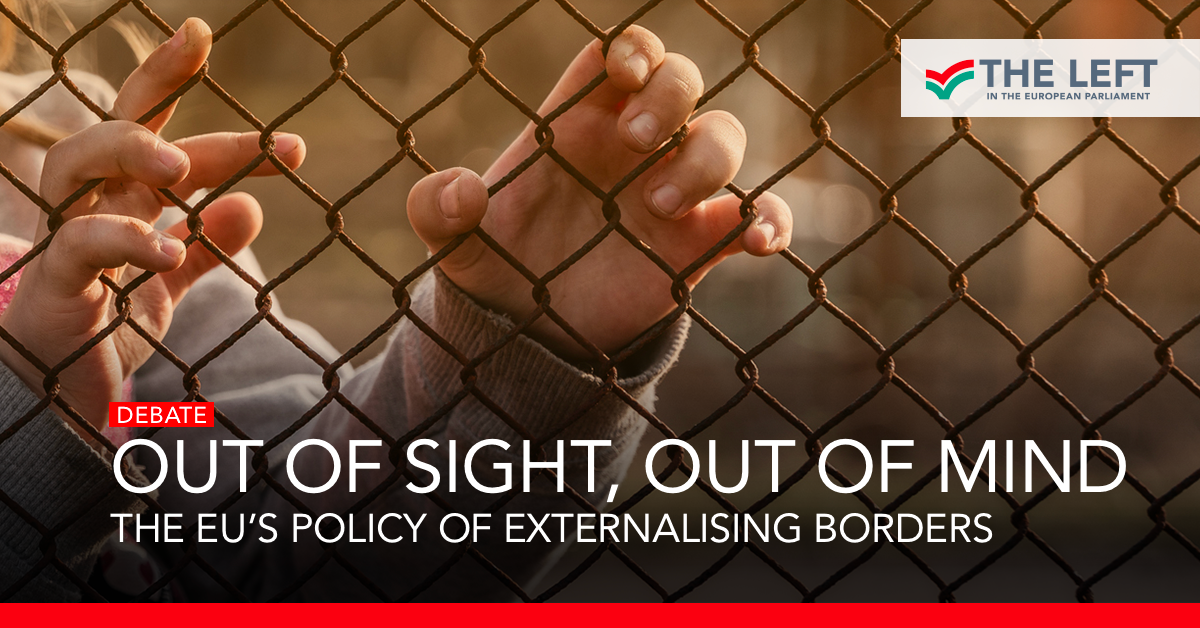 Presentation at the debate ‘Out of sight, out of mind: the EU’s policy of externalising borders‘ – The Left, European Parliament, Brussels, 8 December 2022

First, I want to quickly recapture how widespread the efforts of the EU and its member states to externalise their borders are and why they are so problematic, illustrated with some examples. Then I want to shift to some current developments, with an emphasis on the roles of Frontex and the arms industry.

(1) This graph is from our report ‘Expanding the Fortress‘ of 2018, so a bit dated, but it serves to show how geographically widespread the focus of EU border externalisation is. In this report we identified 35 priority countries for the EU, which I think basically are still the same now. You can see this stretches as far south as Kenya and east as Bangladesh, while there is some cooperation with countries even more far away. All this is aimed at stopping people on the move as far away from European borders as possible, so the EU doesn’t have to deal with them. It is a common phenomenon that we see played out time and again that the EU focuses on closing off one migration route, by that only forcing people to look for other, often more dangerous routes. This is mirrored in the constant shifting of attention in its externalisation efforts: one month Turkey is the focus, the next one there is a new support package for Egypt ready, then the route to the Canary Islands is the main point, then Morocco or Niger is the new most important partner and so on. And of course there’s always Libya.

(2) Border externalisation takes many forms, ranging from money and equipment donations to training and information exchange to increasingly expanding EU military and security forces presence for border security and control in third countries. It has also become an aim of EU capacity building and training missions.

One, there is little discussion about all this on EU and member state side. Of course, there is little discussion about the general course of EU border and migration policies, but when it comes to other aspects, like sharing responsibilities for shelter for people arriving or making national equipment and personnel available to Frontex there is often discussion because all member states want to shift the burden to others. No such discussions about border externalisation, so that keeps expanding rapidly.

Two: it is extremely hard to track everything that is happening, let alone the money that is involved in this. Border externalisation efforts are spread out over many policies, instruments, dialogues and so on, pop up as aspects in other fields, for example as a condition for development cooperation, and are not seldom combined in projects, for example under the Emergency Trust Fund for Africa, that also include support for shelter and assistance. It is almost impossible to put a number on all these efforts, but it runs into billions and billions of euros each year.

In my opinion border externalisation is one of the worst parts of EU border and migration policies, as it has such far-reaching consequences. It leads to more violence, human rights abuses and other misery for people on the move, often ‘out of sight’, so with even less constraints than what is happening at the EU borders themselves. But it is also devastating for the people living in the cooperation countries. The EU really blackmails third countries into acting as outpost border guards, by offering rewards or threatening punishments, thereby making them take money away from much-needed social and sustainable goals and undermining migration-based economies. And many of these third countries have authoritarian regimes, that are legitimized and strengthened by EU border externalisation support. Tools for border surveillance can also be used to surveil political opposition, civil society groups and so on, for example. In this way, EU border externalisation in many cases helps making the situation in non-EU-countries worse and thus fuels reasons forcing people to flee. In other words: the effects of EU border externalisation on the longer term will even be contrary to its own aims of getting the numbers of people on the move down.

(4) Later today we will hear more on cooperation with specific countries or regions by people who know far more about those cases than me, but I wanted to give just a few other examples to illustrate the far-reaching consequences of EU border externalisation policies and practices.

While Germany has often been hailed as a dissonant voice in the EU for taking in many refugees, it is also one of main proponents of border externalisation. Especially former Chancellor Merkel often promoted the idea of supplying more arms to African countries to strengthen their military and security infrastructures, backed up by many equipment donations.

Less known, but Ukraine has also been a focus country for EU border externalisation. The EU has funded the building of various detention centres in the country, where people on the move are locked up under inhumane circumstances. Amidst the war, Ukraine has refused to release these people, while in April the fighting came literally to the doorstep of the prisons. I’m afraid the current situation is unknown, I couldn’t find updates.

And Calais shows that the EU can also be on the other side of border externalisation. The UK has been supplying France with money and equipment for years to increase border security and control, while also continiously complaining that not enough is being done.

I will now focus on some current developments regarding the roles of Frontex and the arms industry.

(5) The role of Frontex is expanding in many ways, also in border externalisation. Sharing intelligence and information has been a practice for years, but still is highly problematic, as is illustrated by the case of Frontex providing the Libyan Coast Guard with info on the positions of refugee boats, leading to pullbacks and detention and torture in the infamous refugee prisons in Libya.

Frontex is also concluding more and more agreements with third countries for actual operations on their territory. This started with neighbouring states in the Balkans, but is now also expanding to Senegal and Mauritania in the context of migration to the Canary Islands. This shouldn’t happen at all, but on top of it there are hardly any human rights safeguards included in the agreements, while and Frontex staff basically enjoys criminal and civil immunity.

There is also a lot to say about return and readmission agreements to facilitate deportations as part of border externalisation. Frontex is also taking on an increasingly central role within the EU here. One point of extra concern are the so-called Collect Return Operations, where the means of transport and escorting officers are provided by the non-EU-country of destination.

The EU military and security industry is the main profiteer of the billions of euros the EU spends on border externalisation, in particular large arms companies as Airbus, Leonardo and Thales, more specialised companies such as Dutch shipbuilder Damen and biometrics and IT companies, but also project management by for example Civipol, a strange French joint venture of the Interior Ministry and large arms companies.

This doesn’t come out of the blue, as the industry has been very influential in co-shaping EU border and migration policies, based on the narrative that migration is foremost a security problem to be dealt with by security and military means. As far as we can see companies do some lobbying specificially on externalisation, but they are mostly focussed on the general issue of border militarisation and the situation at the EU borders. They do expect a particular growth of the border security and control market in Africa specifically though. For them this is important, as it also helps to open doors to new geographic markets for them in a more general sense, once a relation on the basis of border security has been established.

There is a dangerous connection to plans to severely weaken EU arms export controls here. Upcoming proposals to make intra-EU-transfers of arms components much easier, and to take away the say of countries providing components in exports of the completed weapons systems to countries outside the EU, would pave the way to more exports of border security equipment and arms in general to countries at war and repressive regimes, once again fueling the reasons that force people to flee. EU border externalisation and arms export policies are not only wrong and inhumane, they are also plain stupid.