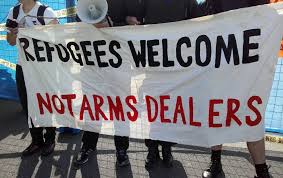 Companies from the military and security industry are profiting from the increasing militarization of border security, according to research by Stop Wapenhandel, in collaboration with the Transnational Institute (TNI).

The same industry also feeds the causes that force people to flee, by continuing to supply weapons to the regions of the Middle East and (North-)Africa, which are characterized by violence and chaos. Countries at war, with armed internal conflicts, human rights violators and authoritarian and repressive regimes are all on the list of European arms customers.

Research also shows how the lobby of the military and security industry helps to shape the European border security policy through close cooperation with EU institutions and the influence of research policy. This contributes to a policy in which migration is seen primarily as a security problem, which must be combated with increasing deployment of military personnel and military means.

In a series of reports, blogs and articles, Stop Wapenhandel summarizes EU policy and its consequences. The role of the military and security industry is also documented, and the most important companies are identified.

Militarisation of the European Union: fresh money for the military industry (with Laetitia Sedou and Bram Vranken) – November 2020