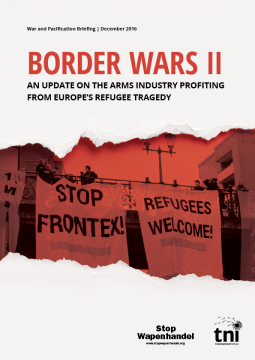 The European Union’s investment in border security measures boomed in 2016, a new report reveals, with prominent arms and security firms being the main beneficiaries. The militarisation of EU’s borders has however come at a terrible human cost, with the highest ever recorded yearly death toll of over 4700 known deaths in the Mediterranean sea, as refugees are forced to resort to ever more dangerous routes to enter Europe.
The report, Border Wars II, is an updated briefing by Stop Wapenhandel, the Dutch campaign against the arms trade, and the Transnational Institute. It builds on research published earlier this year, that revealed that the industry that benefits from the militarisation of border security is the same that fuels the conflicts and human rights violations in the Middle East and North Africa, where many of the refugees  come from.  Three prominent winners of border security contracts – Airbus, Finmeccanica and Thales – were also among the top four European arms traders actively selling to countries in the Middle  East and North Africa.
This latest briefing shows that:
– the European Border and Coastguard Agency’s budget in 2016 of €238.7 million, marked a 67.4% increase compared to the €142.6 million in 2015. The 2016 budget of the EU’s Internal Security Fund increased 22% to a total of €647.5 million
– these budget increases have helped boost a border security market, predicted to grow at roughly 8% a year until 2021. Airbus, Leonardo, Safran and Thales were all in the news in 2016 for border security contracts. IT firms Indra, Advent and ATOS won significant contracts for projects to identify and track refugees
– security fences at Europe’s borders have expanded considerably in 2016 – in Austria, Bulgaria,  Croatia, Estonia, Hungary, Macedonia, Slovakia, Slovenia, Turkey and Ukraine – accompanied by frequent reports of violence against refugees by border security guards as well as by extreme-right militias (sometimes in collaboration with police)
– the EU is greatly increasing its military operations on its borders, sometimes in collaboration with NATO, through various missions: Sophia (Libya), Triton (Greece), Poseidon (Italy), Hera, Indalo and Minerva (Spain)
– European nations, in particular UK, France, Belgium and Spain, have continued to export in 2016 to the Middle East and North Africa, most notably to Saudi Arabia despite its involvement in conflicts in Syria and Yemen that have fuelled the flow of refugees
The briefing also looks at the implications of the transformation of the European border agency, Frontex, into the European Border and Coastguard Agency, as well as the launch of a new Migration Partnership Framework with 16 countries in Northern Africa.
“The boom in the border security market at a time of unprecedented loss of life sadly shows where  European Union’s priorities lie”, says report author, Mark Akkerman from Stop Wapenhandel. “By militarising our borders, we are rewarding arms and security firms while endangering refugees forced to take ever more desperate measures and dangerous routes to seek safety in Europe.”
Nick Buxton of Transnational Institute and co-editor of the report said: “The only way to stop this terrible death toll is for the EU and its member states to stop fuelling the conflicts in the first place, and invest money spent on arms and borders into providing a safe passage and a fair treatment of refugees.”