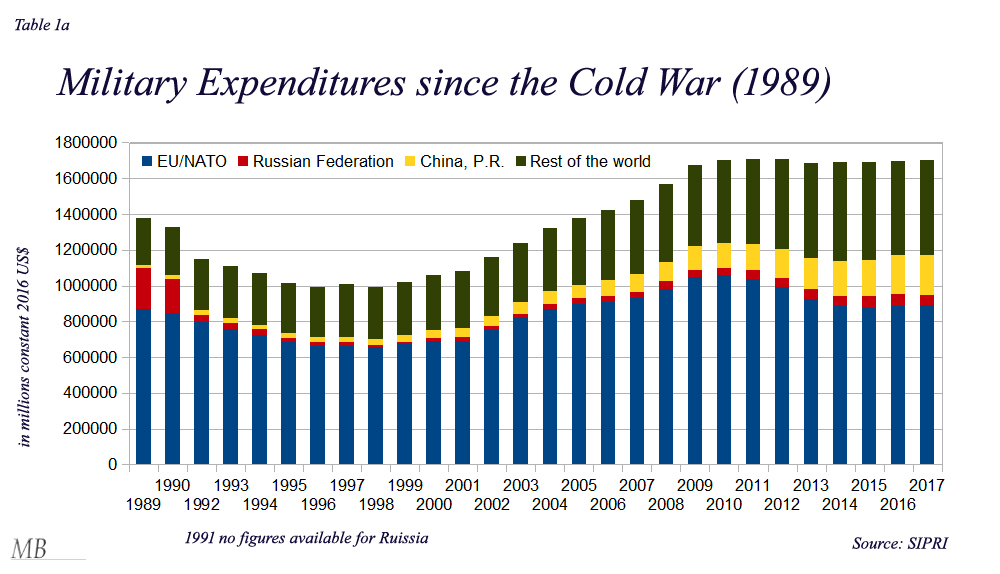 It is hard to miss that the West is the dominant party in military expenditure. It spends more than the rest of the world together. The expenditures of Russia collapsed after the Cold War. Because the category ‘Rest of the world’ (in tables 1a and 1b) also includes major western allies such as Australia, Japan and South Korea (all three among the fifteen largest military spenders) the balance is shifted even more to ‘west’. In response to criticism on the discourse of the underarmed west, a debate started if one has to look differently to the budgets of adversaries. 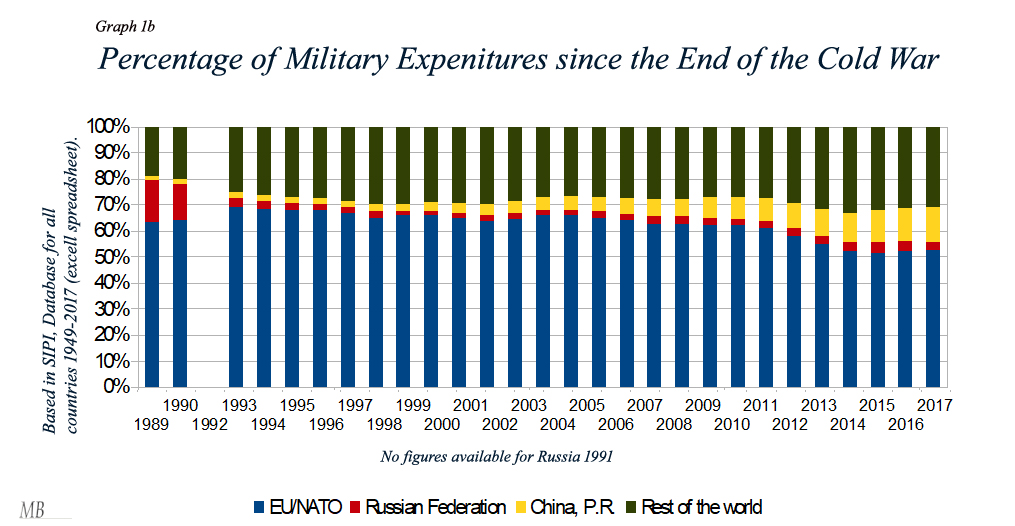 Washington takes by far the (although slightly shrinking) lion share of the global military budget. Therefor the debate is centered around the Pentagon. In May 2018, during a hearing in the Senate Defense Subcommittee Senator Dick Durbin (D) addressed the following question to general Riley present at the meeting: “You tell us that one of our biggest threats, greatest enemies, is Russia; turns out we read recently that Russia spends about $80 billion a year on its military (…) So let me get this straight: We’re spending $600, $700 billion against an enemy that’s spending $80 billion. Why is this even a contest?” Expenditures of the allies of the US were not even needed to make this argument. 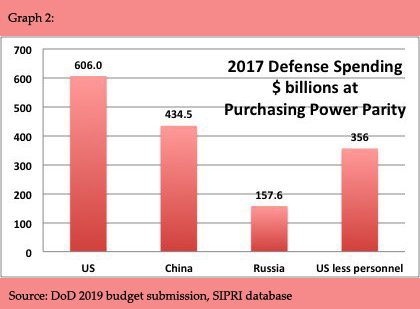 General Riley couldn’t deny the figures, but doubted the comparison. “The cost of Russian soldiers or Chinese soldiers is a tiny fraction. So we would have to normalize the data in order to compare apples to apples and oranges to oranges (…) take out the military personnel accounts for both the Chinese, Russians, and/or the US, and then compare the investment costs.”

Sydney Freedberg Jr, journalist at Breaking Defense took the challenge and worked out the suggested calculation. He came to the conclusion that: “Whatever methodology you use, Russian spending remains a fraction of US.” China however, Freedberg stated, outspends the US by over 20 per cent.

Strangely enough while Freedberg left out US military wages in his comparison (table 2) there is no column for China without personnel cost. Although the cost for personnel in China counts for one third of the military expenditures and while the size of the Chinese armed forces are rapidly shrinking, the level of technology is increasing. Chinese wages in general are rising, technological skilled personnel is even more expensive, so the costs of the military man or woman will rise too. Analysts expect the portion of the Chinese Defence budget going to personnel to grow.

The use of Purchasing Power Parity (PPP) exchange rates in this comparison is also problematic. The PPP creates the possibility to compare the value of a currency in different countries. Mandy Smithberger at the Center for Defense Information at the Project On Government Oversight notes in an article titled ‘Coocking the budget numbers‘ that PPP is designed to reflect the purchasing power for goods and services that are representative of spending patterns in each country, that is, primarily for civilian goods and services. Military expenditure is used to purchase goods and services that are not typical of national consumption patterns. You do not have to go deeper than Wikipedia to read they also do not consider the different quality of goods among countries. What is the cost of a Russian weapon and and how to compare it on quality with a similar European version of the same weapon? China paid US$ 1.4 billion for two air defence surface vessels of comparable quality to Dutch LC-frigates valued at $ 816 million.

Freedbergs work adds to the reasons for the cynical saying: there are tlies, damned lies, and statistics. In the debate om military expenditures (ME) graphs are often used to solidify the positions of opponents of military growth and by those supporting the military establishment. To see what is left out or what is included, what is or are the sources, is the craft of reading them. Here graphs are outright used as “another excuse for why taxpayers must spend more money on the defense budget. Now the Army’s Chief of Staff, General Mark Milley, is trying to cook the books to claim U.S. defense spending is barely keeping up with China’s military spending” as Mandy Smithberger wrote. She concludes “even cooking the numbers the United States still spends more than China and Russia, and at best it’s dishonest to suggest otherwise.”

Retired four-star admiral James Stavridis boiled Freedberg’s maths even further down: “To compare our soldiers with Chinese or Russian soldiers (or sailors) is like comparing not apples and oranges but apples and hubcaps [wheel covers]. You get what you pay for, and we are spending a lot more — and getting good (and necessary) value for our money.”