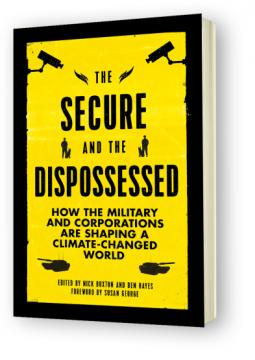 Next month Paris will be the venue of the important COP21 – United Nationals Conference on Climate Change. World governments have to make highly needed binding agreements on action against climate change and thereby limit its already noticeable consequences.
Michael T. Klare, professor of Peace and World Security Studies and a renowned specialist on war, energy and climate change, wrote COP21 should be “considered not just a climate summit but a peace conference – perhaps the most significant peace convocation in history”. He warns that continuing failure to act against climate change and its consequences could render “significant parts of the planet in the kind of state that Libya, Syria, and Yemen are in today.”

The idea that climate change and security are intertwined is not new. Militaries themselves increasingly acknowledge the seriousness of climate change, even putting them at odds with some of their climate change-denying traditional supporters. Does this mean the military is at the forefront of the struggle against climate change? Hardly so, since its concerns are mainly spurred by security considerations, and have got nothing to do with care for the environment or for people that suffer from the impact of climate change.

Hence, the military’s primary strategic interest is less about climate change itself and more  about the adjacent problems of energy scarcity, seeking to safeguard fuel transit routes  and reducing the military’s oil dependency.  To keep itself operational it turns to switching to alternative fuels and other ‘green’ measures. Apart from this it prepares itself for perceived new security threats and resources scarcity. As Naomi Klein writes in her book ‘This Changes Everything‘: “[I]n the name of “national security, we will intervene in foreign conflicts over water, oil, and arable land, or start those conflicts ourselves. In short our culture will do what it is already doing, only with more brutality and barbarism, because that is what our system is built to do.”

The arms industry, always on the look out for new profit opportunities, sees new markets emerging. There’s not only a new ‘green’ (or rather ‘greenwashing’) military market, but it also tries to enter the environmental and energy markets. Next to that, growing instability, expected conflicts over scarcer resources and other consequences of climate change contribute to increasing military budgets worldwide. And the militarization of border security to stop refugees, which will include growing numbers of climate refugees, is another profitable business opportunity.
According to journalist David Cronin, the defence industry “could be one of the few beneficiaries from ecological catastrophes” by “turning an environmental question into a security issue” and be propelled by the impacts of “global warming expected to increase competition between nations over energy sources”.

Last February Marillyn A. Hewson, CEO of the world’s largest military company, Lockheed Martin, gave a speech which focussed partly on climate change. She said “As we consume more than ever, climate change is accelerating as well. In fact, we know that 2014 was the hottest year in human history. These pressures combine to create real threats to security and stability around the world”, arguing that the company’s foray into energy markets and other ‘green’ ventures are growth opportunities. Business cases include building a 10-megawatt power plant off the coast of China that would generate energy by using the differences in ocean temperatures and contributing to an ‘environmentally friendly’ fish farm in Hawaii.

While these and other military industry moves are applauded by some parts of the environmental movement, they need to be judged for what they really are: adaptations to a changing security situation, with the aim of maintaining its position and profits, by contributing to securing the current world order and defending the interests of those who have been the main actors causing the climate crisis. Rich countries are by far the most responsible for climate change, yet Oxfam noted in response to a G7-declaration on climate change this summer: “Currently rich countries provide just 2 percent of what poor countries need to adapt to a changing climate.”

Protests in Paris next month are highly needed to build more pressure on governments to bring COP21 to a satisfactory conclusion. This is not just a responsibility of the environmental movement by itself. As Noami Klein said in an interview: “Having the anti-war movement more engaged in climate and vice-versa, is exactly what we need.”
The British Campaign Against Arms Trade (CAAT) has made a start with its campaign ‘Arms to Renewables‘, propagating a shift in government investments, stating a “move towards offshore wind and marine energy could produce more jobs than the entire arms industry”.
From the side of the environmental movement, activist and writer Steve Rushton argues that to reach “a positive climate future […] we need to shut down the business of war”, because “at its core the military machine has an absolute disregard for the environment.”

This month the Transnational Institute (TNI) will launch an new book on the issues of climate change and security: ‘The Secure and the Dispossessed – how the military and corporations are shaping a climate-changed world’. Stop Wapenhandel contributed a chapter ‘Greenwashing death: climate change and the arms trade’.