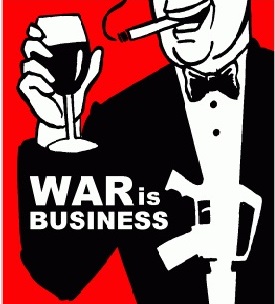 The war in Iraq was a major issue this year. We looked particularly into the role of Dutch transport infrastructure for supplying US equipment to the Gulf-region. This followed an approach chosen by the Belgium peace movement to oppose the use Belgium for military transports. Remarkably the Dutch role was not very big. The national airport, the Eemshaven (harbour near Groningen) and the Port of Rotterdam have been used only a few times. Contrary to the past Belgium was more often used than the Netherlands. Part of the US Military Traffic Management Command (MTMC, near Rotterdam) was temporarily based in Belgium. We still have no fixed idea why this change in military logistics happened. A Chinese company has a 35% share in the main freighter terminal in Rotterdam (ECT). This may be one of the reasons.

While arms where mentioned as the most important reason for war, coverage of the whereabouts of the main stocks of Iraqi arms was not an issue in the Netherlands. We did do some research on recent arms trade to Iraq and recalled the Dutch arms exports to Iraq of the eighties (including chemicals for chemical warfare and night vision equipment). Without much effect in the media.

While the first bombs where dropped ‘on’ Saddam Hussein a few hundreds of kilometers to the South in the United Arab Emirates the major arms fair of the Middle East took place: IDEX. Two departments of the Ministry of Economic Affairs and one from the Ministry of Defence participated, besides ten Dutch companies. The Secretary of Economics cancelled his visit (for unknown reasons).

During the SOFEX arms fair in Jordan, the Dutch company RDM sold 18 mobile artillery (MOBAT) pieces to the Special Forces of Jordan. RDM is system integrator for the MOBAT and assembles the system, which includes BAES fire control and DAF trucks. The deal was concluded early 2003. It is clear that the Special Forces play a major role in repressing public discontent with the role of the Jordanian government in the region.

The campaign on cluster bombs almost ended last year when the Netherlands based ABN Amro bank said it would end its 25% investment in INSYS. INSYS is the British company which produced the BL 755 cluster bomb during the eighties and is now responsible for maintaining them. However it became clear that ABN Amro is looking for a buyer and will not end its participation in INSYS before it finds one. The campaign was therefore restarted by activists and the SP (left wing party in Parliament). After the British air force used 66 of them during the war in Iraq the campaign gained more strength. We hope to mention next time that ABN quitted because of public discontent.

Recently we found out that Dutch naval equipment was used off the coast of Aceh, when Indonesian armed forces (TNI) where disembarked to take part in the biggest military operation in Indonesia since the annexation of East Timor. The sale of this particular Dutch equipment aboard the vessels was heavily criticised since 1995 until it was finally delivered just after the arms embargo of 1999-2000. We have published on this deal many times, see e.g. ‘Indonesia: Arms Trade to a Military Regime (ENAAT, 1997) and together with BUKO in the Swedish newspaper Aftonbladet (23/07/96).
In January 2003 it has been reported that the Dutch embassy in Jakarta is lobbying for several Dutch defence companies, for new contracts. Most probably new naval equipment. The Dutch government said in February the navy and air force are not used in internal operations of TNI. This position has changed a little as a result of the Aceh operations. In June the government said in response to questions in Parliament that the emphasis of military operations is on the Indonesian army (remarkably, in internal notes, which where not deleted before the answers where made public, a civil servant wrote he was not sure about this, but that it was handy to say so).
It is reported that armoured AMX vehicles have been used during the Aceh operation of TNI. The Netherlands sold over 400 of these armoured vehicles during the period 1979-1985 (see ‘Stop Arming Indonesia’, ENAAT 1994). On the political level nothing much happened.

Jane’s Defence Weekly reported in its May 7 issue the complaints of Dutch defence industrials. They fear the competitiveness of the Dutch arms industry will be completely eroded, because of: budget cuts in Dutch defence spending; the lack of sensitivity to local employment and investments in high-technology; and the fact that the Dutch government is applying European defence export license regulations “more strictly than other EU members.” This last concern was specified by pointing at the obligation to get an export license for product demonstrations abroad, as well as for deliveries of systems and spare parts. This strict Dutch government policy is used by competitors in the market against the Dutch industry, the industrialists say.
The spare parts and weapon systems issue is brought forward again and again in efforts to try to erode Dutch arms export controls. The complaint on the export license for demonstration models was new to us, but probably related to questions raised over the last years about Dutch companies showing at Indian and Pakistani arms fairs, despite an arms embargo.. An example shows however that the licences system for demonstrations is not that bad for the industry at all. When the RDM asked for an export license for an M-109 howitzer to be exported to the Philippines, to demonstrate it to the Philippine armed forces (PAF), it was issued after 33 days. This while the PAF is involved in internal warfare and uses this particular type of weapon to bombard suspected barrio’s. If you can not look forward more than one month it is better to end your career as CEO in the defence market, we would say. It looks more like the Dutch industrialists are looking for a race to the bottom on arms controls.

At present the text of a book written by us on Dutch arms trade is sent to the publisher. Writing this book consumed much of our time and energy. The book contains a viewpoint opposite to that of the defence industrials above. It has seven chapters showing 1) the Dutch government is actively supporting the Dutch defence industry; 2) controls on arms exports are lax and eroded by international developments; many exports are scarcely controlled, especially in the case of 3) dual-use, 4) non-strategic equipment, like military transport planes, -ships and -vehicles and construction of military bases, 5) transit of arms through Dutch harbours and, 6) spare parts for offset deals. The book concludes with 7) an overview of Dutch small arms and ammunition exports and a critical review of the small arms campaign. It will be published in autumn.

This leads to the conclusion the growth of Dutch arms exports will continue into 2003.

The Annual report over 2002 has not yet been published. Another report on Dutch exports in 2001 has been published only for the Dutch parliament. The report consists of all individual arms and dual-use export licences (so not exports itself) and the value of them. It is 26 pages long and covers almost 1,300 licenses. Type specifications have been whitened, but it is much more detailed than the annual report itself. We think this report should be public and not semi-confidential. The table below provides the format of its contents.