“I am certain that, at some time in the future, President Xi and I, together with President Putin of Russia, will start talking about a meaningful halt to what has become a major and uncontrollable Arms Race. The U.S. spent 716 Billion Dollars this year. Crazy!”

This Trump Tweet was sent in the heat of the debate on enlarging the US defense budgets. Maybe the opportunist real estate billionaire Donald Trump was defending his own financial interests, which are not always overlapping with those of the US military. The hight of US military spending and NATO budget solidarity is often used as an argument to also raise European defence spending. Recently, European defence budgets have indeed started to grow. (see graph 1)

The Dutch military expenditures are an example of this European tendency (see graph 2). Figures over the past three decades reflect political developments:

* high during Cold War, followed by decline after 1989,

* rise triggered by the War on Terrorism;

* decline after the economic crisis; and

* rise again because of the magical NATO ‘2% of GDP’ norm, rationalised by the so-called Russian threat. 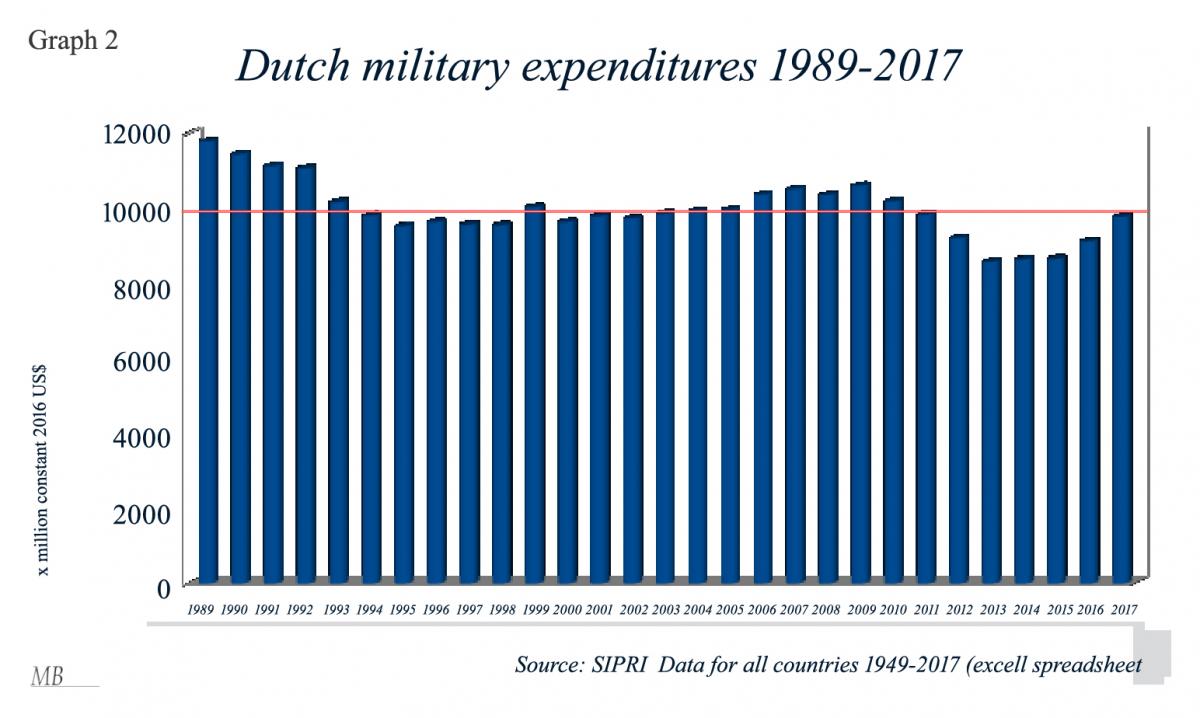 Absolute defence spending figures normalised to post Cold War levels when expenditures where adapted to the implosion of the Soviet military industrial capacity. Today, Russia is still a mere shadow of what the USSR militarily was.

The norm of 2% of BNP for defence that NATO members agreed on is accmpanied with a norm for 20% investment in new weaponry, a decision warmely welcomed by weapon manufacturers. It underlines the shift away from troops to high tech arms. To quickly understand this shift it is worth to chew a moment on the often-used abbreviation C4ISR (Command, Control, Communications, Computers, Intelligence, Surveillance and Reconnaissance). Information is key in modern warfare. Information must be gathered, communicated to commanders and sent to weapon systems in air and space, at land and at sea. It must provide situational awareness and direct bombs, missiles, satellites and drones. These technologies come with enormous costs. Budgets shift from troops to technology, in favour of the arms industry.

For the Netherlands the larger parts of the defence budget goes to acquisition of Lockheed Martin F-35 fighter jets. Is this justified by any threat from Russia? It is worth taking note of a Rand research report on the Baltics. According to this report, NATO has an overweight on Russia of 364 : 0 on 5th generation fighter aircraft (on older 4th generation it is 5,094 : 1251). Depicting Russia as a major threat is unrealistic. In a conflict between the tiny Baltic NATO-members and Russia, Moscow has a much better geo-strategic position and strong internal transport infrastructure. It would probably have the upper hand during the first stages of conflict. But the Russian military forces are much weaker than NATO and Russia is also vulnerable in the East, where it is close to the major US military bases in Korea and Japan. Invading the Baltics would be a clear suicide mission for the Russians. Moscow is not that foolish.

US Defence Secretary Mattis might say that: “We have go to make certain we can restore America’s strength.” but America’s strength is only doubted in the Pentagon itself. Foreign policy specialist Chris Ogden noted* for example the “current hard and soft power preponderance (including unrivaled power projection capabilities)” of Washington. The Pentagon and its friends are underestimating the US military to get even more funds. The National Defense Strategy Commission proposed in November a budget up to one trillion in the next five years.

The real argument for the high budgets of the US and its allies is pointed out by Bloomberg Opinion columnist Hal Brands: “it is misleading to simply compare the U.S. and Russian military budgets — or the U.S. and Chinese military budgets — on a one-to-one basis because we operate globally in a way that none of our adversaries does. Add in the fact that we only play away games — we operate near our competitors’ territories, at the end of our very long supply lines, all of which gives them a major geographic advantage — and we simply need a lot more military power to make our alliances credible and make our influence felt.” The growing expense of hightech armaments the military uses to exercises this power creates even more demand for higher budgets.

The US wants to keep the upper hand at a global level, and to sustain the illusion of a unipolar, US dominated world. This includes military domination and offensive options. Europe is following in this dangerous illusion. It is not crazy. It follows a certain logic; these military budgets have to defend the economic interests of the 1%. 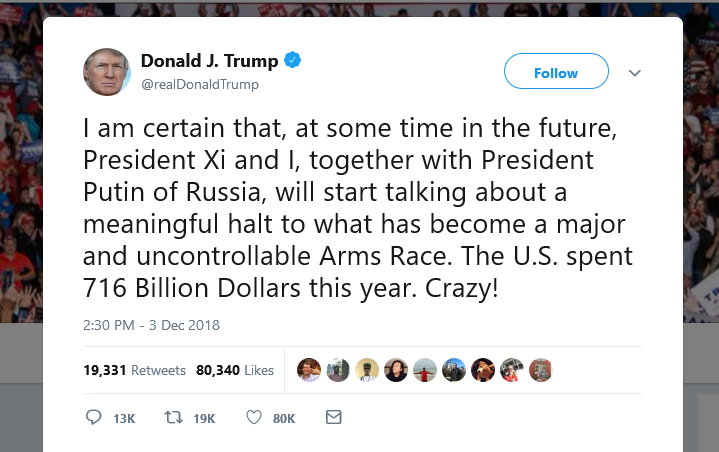