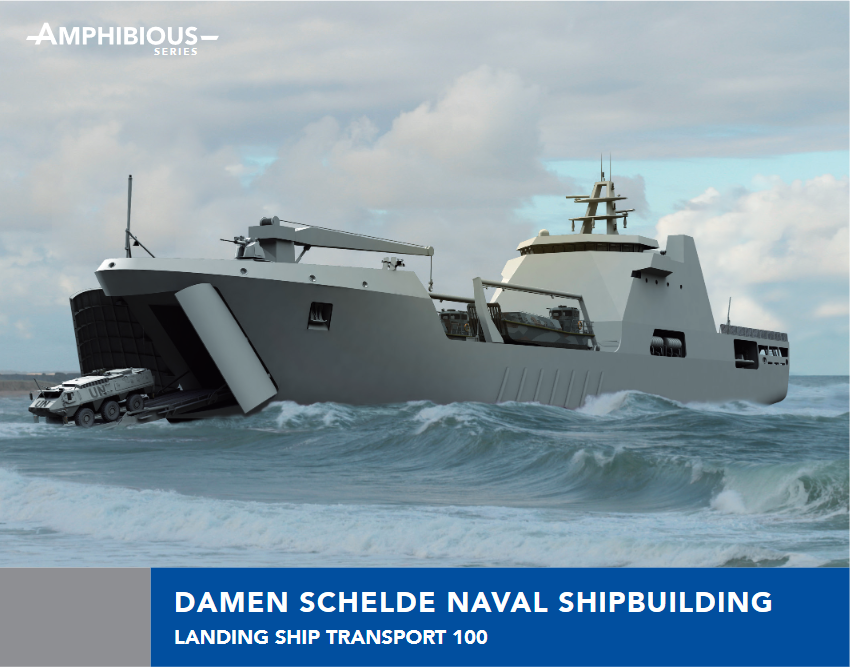 In a video clip the use of the Landing Ship Transport 120 can be watched; ramps unfold and weapon systems are boarded. The ship is developed by the Dutch conglomerate of ship wharfs Damen. Tanks (up to 70 tons), vessels and armoured vehicles can be brought aboard in several ways at different spots of the ship.

Construction of a slightly smaller type of the class, the LST 100, for the Nigerian navy began this week. Vice Admiral Ibok-Ete Ibas, the Nigerian naval chief, said it will be deployed for “the protection of maritime assets and the preservation of law and order at sea” and “beyond.” It will be ready in May 2020.

According to Damen the ship is suited to transport 235 troops, has bow and stern ramps capable of 70 tons (just below the weight of a main battle tank), it can transport smaller vessels and (armoured) vehicles, board helicopters and surface and aerial drones. The product sheet states it: can be fitted with a suitable set of Sensors, Weapons & Communications. If and what kind of weapons will be installed on the Nigerian vessel is not known.

The US Department of State reported in its human rights report 2018 on Nigeria that: “Due to the inability of law enforcement agencies to control societal violence, the government continued to turn to the armed forces to address internal security concerns. The constitution authorizes the use of the military to “[s]uppress insurrection and act in aid of civil authorities to restore order.” Armed forces were part of continuing joint security operations in the Niger Delta …” The Dutch developed LST comes in handy to operate in the Niger Delta.

The ship will not be built in the Netherlands. Damen has a wide range wharfs. Of the 36 Damen wharfs 20 are located abroad, that may be in Europe and the United States, but also in Brazil, China, Cuba, Indonesia, Turkey, Qatar and South Africa. The ships for Nigeria will be built at the Sharjah Damen Shipyards in the United Arab Emirates (UAE). The keel laying ceremony is pictured by the Nigerian Navy.

Stop Wapenhandel recently wrote in an essay on climate change that Shell in Nigeria is protected by Dutch sales of vessels in 2010. In answers to Parliamentary questions the Dutch government bluntly stated that the boats were important to protect oil platforms of Shell in the Niger Delta. Although violent military repression of Niger Delta opposition groups was a well-established fact at that time, according to the government the gunboats could not be used in human rights violations. The sale however failed in the end, not because of human rights criteria but because of corruption. Curious how the current sale of the Landing Ship Transport, with a Dutch design, will be defended by the Dutch government, armed or not armed.

The LST 100 is far from the only vessels sold to Nigeria to control its waters. Often customers are not regular army but Civil Security firms. The Dutch export credit agency Atradius Dutch State Business lists a number of assurances to Damen and different Nigerian customers in the oil and the connected security industry. While most listed banks and companies have long track records in the oil industry it is curious the Fidelity Bank was involved in a recent official Dutch Export Guarantee just after the Managing Director was accused of laundering $153.3 million. But while it may be understandable armoured Damen vessels without weaponry are sold for use in the troubled waters by civil operators, it a step further to deliver a military ship with a wide range of potential tasks in Nigerian navy military operations while bringing heavenly armed troops on land.