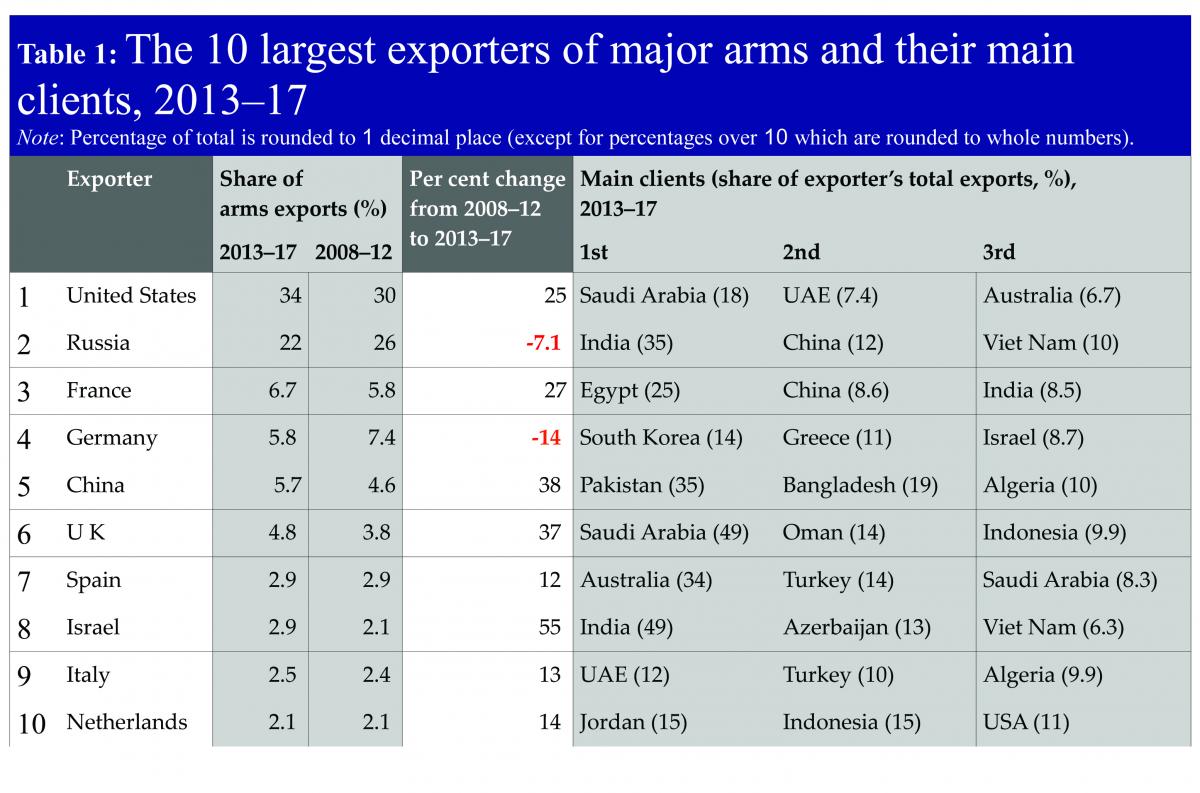 In the latest annual report Trends in international arms transfers by the Stockholm International Peace Research Institute (SIPRI) The Netherlands entered the top-10 of Global arms exporters. The main message of the report, covering 2013-2017, is that global arms exports grew 10 per cent in comparison with 2008–2012. In the top 10 of largest arms exporters only two countries had a shrinking market share, the rest took a bigger slice of the larger cake (see table 1).

A Dutch Parliamentary Commission asked the Minister of Foreign Trade and Development Cooperation, Sigrid Kaag, to send an explanation of this high arms export position to the Parliament. It will be discussed on June 6 in a debate on Dutch arms export. In her appreciation, the minister praised the SIPRI report for its methodological consistency, which makes it a tool to map changes in the global volume of arms trade. But the appreciation spins when it says that the Netherlands is a much smaller exporter as depicted in the report. According to the minister:

a) The Netherlands has, unlike other countries, a transparent policy on the sale of surplus arms. Most of the exported Dutch surplus weapons fall under one of the eleven SIPRI categories (see SIPRI sources and methods) and in its Trend Indicator Value (TIV) SIPRI attributes to them a 40% value of their original cost. So compared with other countries the Netherlands is over-reported and ends up with a relatively high export value;

According to the minister: “All together the methodology results in the description of the Netherlands as a relatively big arms exporter,” and, “the picture would be different when all exports of military material were included and when the value of export permission or actual exports were taken to measure the value,”

The surplus argument is peculiar, because SIPRI certainly includes surplus arms from other countries in its calculation. Maybe some governments do not report as clearly as the Dutch. But in SIPRI’s Transfers of major weapons database surplus exports (as well as industrial exports) are listed based on a wide range of sources, not only on government reports.

Small arms do not make much difference in the ranking as their financial volume is limited. Germany for example provided licenses for small arms exports in 2006-2016 valued € 561 million. This is just over one percent of all German military exports in this period, which account for € 55 billion. In 2016, all EU member states together issued export licenses for small arms valued € 3 billion, of which 80% (€ 2.4 billion) was for export to the US. Compared to the total military exports of € 190 billion this is less than 2%. EU ammunition export is more substantial; permits valued € 8 billion in 2016. To including both ammo and small arms has effect on the ranking: Belgium and Austria would then join the league of large arms exporters. So the minister has a point here.

Not mentioned however is that the Rotterdam harbor facilitates the shipping of large amounts of small arms and ammunition to destinations such as as the Philippines and South Africa. This is not counted by SIPRI but gives our country a big role in the international arms trade. China is exporting ammunition through Rotterdam to Italy. The Netherlands is an international hub for arms exports (see: The Netherlands transit of small arms and ammunition 2013-2018).

When Sweden starts exporting its Gripen fighter jets to Brazil, it will directly surpass the Netherlands in the near future. Which shows the relative value of a ranking order. Relevant is that over a quarter of the global sales of major arms come from the European Union. Combined with North America, western countries are responsible for 60% of all international trade in major weapon systems.

The main clients of Dutch arms exports buy in the categories surplus and naval.(see table 2). Jordan is 1st mainly because of the sale of F-16 aircraft. Jordan is a country using its fighter aircraft in Syria and in the Saudi led coalition against Yemen. Dutch weapons count for 43% of Jordan’s major arms imports in 2013-2017.

Indonesia is 2nd because of the sale of Damen warships, which will have a huge impact in this volatile region. (SIPRI does not include Thales command and control systems in its figures, but this is a major part of Dutch arms exports.)

The US is 3rd also because of Damen Stan Patrol-4708 ships build under license. The US is however far more important for the Netherlands as a receiver of components for missiles, helicopters and fighter aircraft (see table 3). Those components are not separately reported in international statistics, because they are assembled in bigger systems.

The letter of Minister Kaag concludes with a paragraph on the excellent Dutch arms export policy. A judgment underlined by denials of export permissions and the Dutch restrictive policy based on the Common Position. It cannot be denied the Dutch government is doing well in many respects, but not in all. There is no reason to downgrade its role in the international arms export. 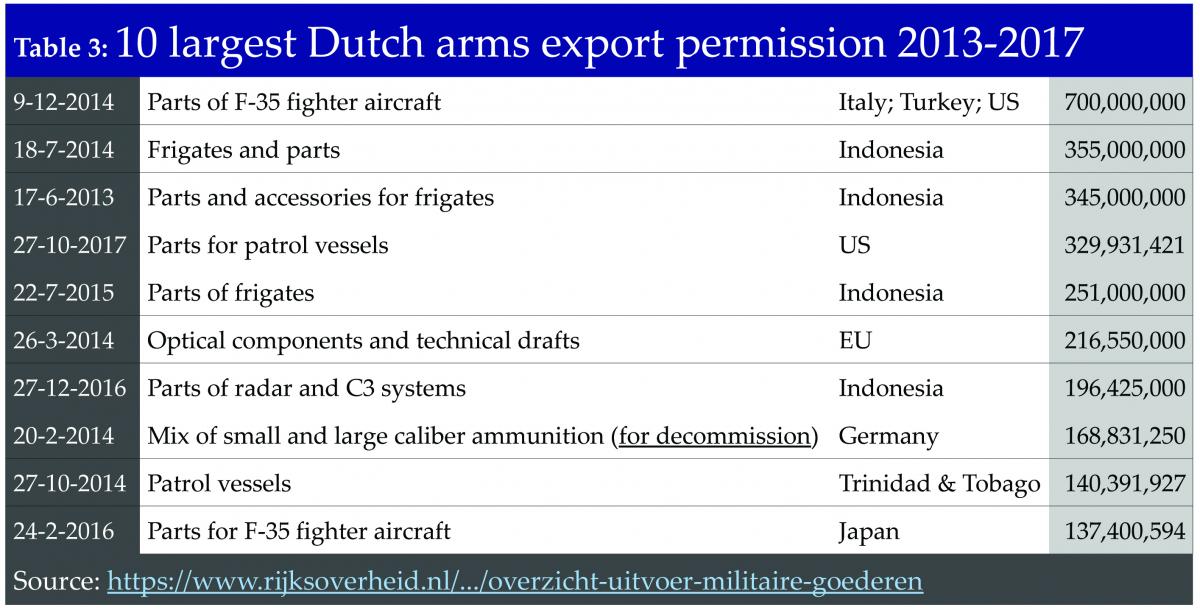 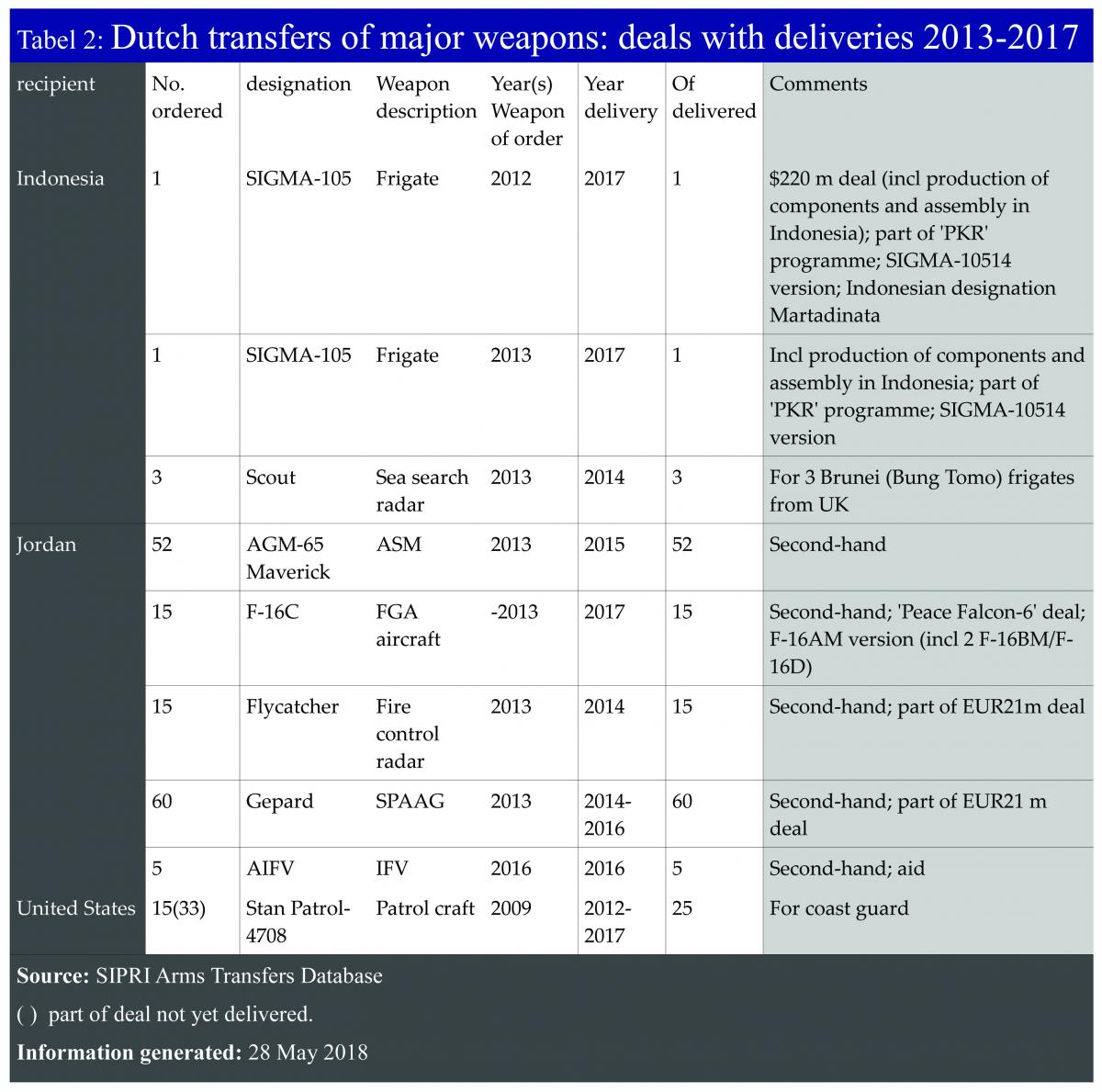