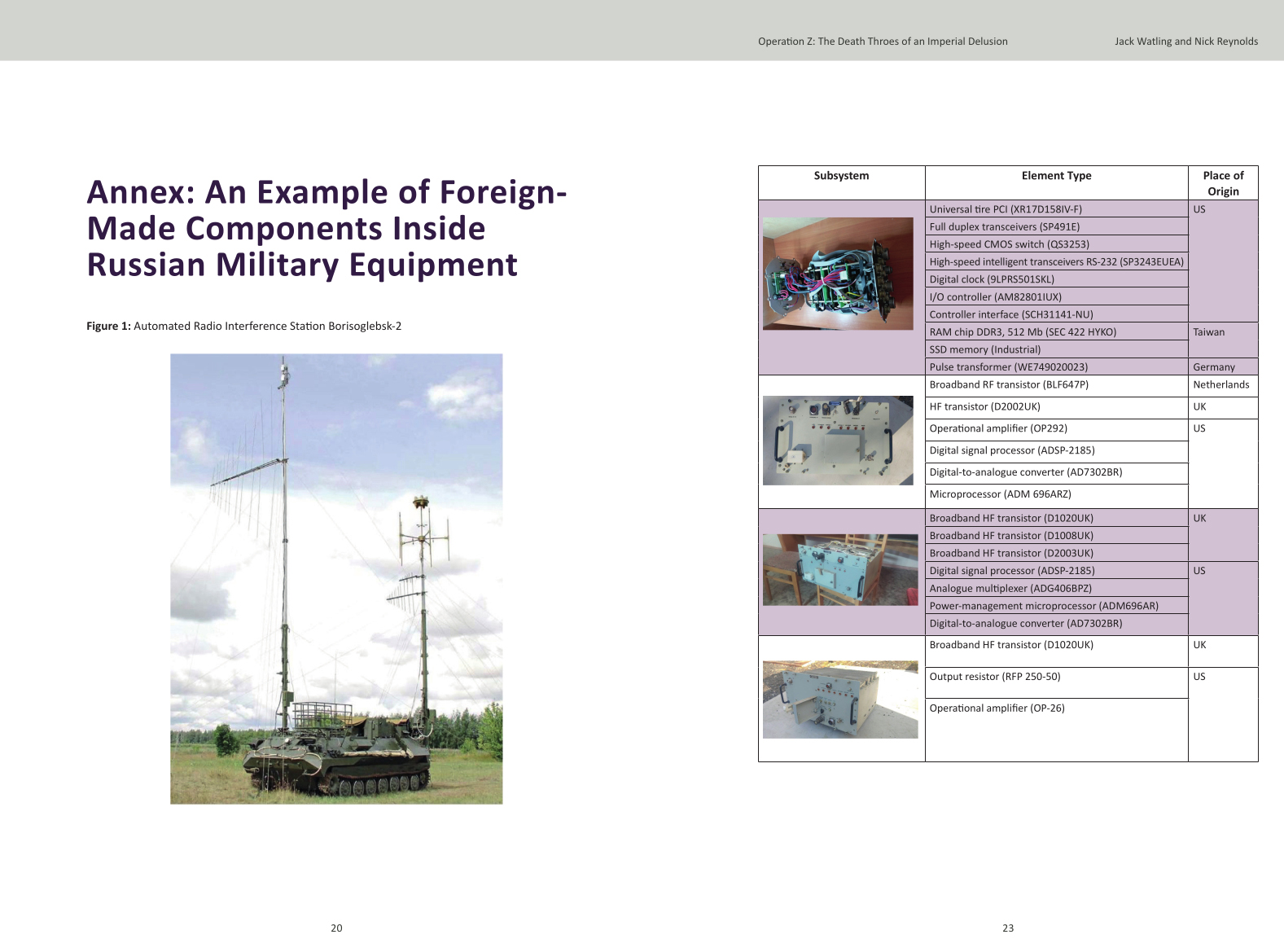 Almost all of Russia’s modern military hardware is depended upon complex electronics imported from the US, UK, Germany, Japan, Israel, China, the Netherlands, and some other countries. According to the UK report: Operation Z; the death throes of an imperial illusion the Netherlands is one of the countries selling electronic components to Russia for military radio’s. They“form the backbone of the Russian military’s tactical communication.” This kind of information stresses the importance of stronger controls to frustrate Russia’s war.

The technology was found during technical research by the Ukrainian intelligence community and from leaked Russian documents and described in a technical reports seen by the authors of British Royal United Services Institute (RUSI), which is a renowned part of the UK defence establishment.

A advanced weapon is a complicated system and can not properly function without specialised technology. Russia is not able to produce all these parts itself. The Il-76 transport aircraft’s communications suite alone is e.g. identified to contain eighty components that can not be replaced with manufactured parts in Russia. These parts have to be imported. This dependency on foreign technology is true for most of Russia’s advanced weapon systems.

Sanctions are therefor not symbolic, they really hamper Russian military and arms industry operations. They would even be stronger when paired with the sanctions on Russian oil and gas which bring foreign currency to Russia to buy weaponry (SIPRI concluded the oil revenue’s and the military budget are closely linked) sanctions now slowly introduced by the European Union member states. However closing all the gaps in the EU control on strategic exports was far from resolute before the war started.

As the war in Ukraine will be longer than the Russians had expected also the access to this technology becomes more essential for Putin’s military. Russia is currently developing several ways to bypass sanctions by creating: overviews of what is produced domestically; what can be bought from ‘friendly’ countries; and by the covert means to obtain the essential technology, even without permission of the owner of the intellectual property. Russia set up shell companies to try even to import weapon manufacturing technology, as research by the Belgian French language public broadcaster RTBF recently revealed based on leaked documents.

In an annexed table to the RUSI report, the writers gave an example of foreign made components inside a Russian weapon system, the Automatic Radio Interference (jamming) Station Borisoglebsk 2. This system is a major tool in Electronic Warfare and designed to disrupt communications and GPS systems. It is produced since February 2015, so after the sanctions because of the Krim annexation were installed. Soon after production was launched they were used in Eastern Ukraine (and also Syria) in a way even NATO would have difficulties to resist.

In the four page illustrated table RUSI gave the subsystems and the subsequent elements with production code and country of origin for the jamming system. Many parts come from the US, and some from Germany, South Korea, Taiwan, the UK and the Netherlands. The Dutch element is a so-called broadband RF transistor (BLF647P). It is produced by Ampleon with its Headquarters in Nijmegen. It seems to fall under the EU dual use code (5A001.4) The Dutch government gave several permissions for exports to Russia of the A5001 category of technology in 2016 and 2017. It is not clear if these licenses were connected to these items. It is also not clear if the subsystems for the military jamming system are regarded dual use by the Dutch government. And if not, whether this will change after the RUSI revelations. And most likely the reported components are far from all the authors have seen; there might also be more Dutch components.

The report states that companies manufacturing the components may not know the Russian military was the end-user. That can hardly be an excuse if it continues until today. But it is not only the responsibility of the producers to know. It is also the governments providing the licenses to export the dual use products who have to play a controlling role in this. The findings in the Ukrainian intelligence reports as seen by RUSI are underlining the need to actively inform and control producers not to sell to Russia and be careful when re-exports may be a potential danger.

Questions must be raised by all sectors of society coming across such information, like people in the manufacture industry, controlling agencies, investigative journalist, hackers and activists. Daniel Salisbury in an article following the RUSI report calls for a collaborative approach which should ensure the implementation of export controls to help undermine Putin’s war machine. To halt the supply policies should go further than merely putting embargoes in place.

It is impossible to close all gaps to Russia. Re-export of technology can be limited with tighter control, end use declarations and controls, but the the majority of countries in the world still have friendly relations with Russia and may be willing to be part of covered re-export. The RUSI report states that these supply routes must be constrained. It will be a delicate policy to do this without alienating the governments in these states. Ending dual use export to countries friendly to Russia all together is impossible for several reasons. It is a large part of the economy, difficult to control and items are useful for military and civil use in a wide array of sectors like the food industry, health care, scientific research etc. A more severe policy is possible.

Russia is preparing for a protracted conflict and stopping the technology for this must be an important part of the efforts to stop this war: “Limiting Russia’s ability top protract fighting beyond the summer could be effectively enabled by reducing its access to modern armaments,” RUSI concludes. Is the Dutch government doing all what can be done to prevent future exports of Dutch technology for weaponry and military technology used against Ukraine? It is time to demand serious control.