The Dutch government should reconsider its arms export policy to Jordan considering the recent scandals and developments in the region. It should also provide more detailed information on its surplus sales in general, so a more elaborate opinion can be formed by MPs and civil society.

Over the past years a constant flow of information has been published by the international media on Western arms in the hands of IS and other terrorist groups in Syria and Iraq. The most remarkable recent example was a story investigated by the New York Times and Al Jazeera on a large volume of arms and ammunition sent by the CIA to Jordan for Syrian fighters. The weapons were stolen by Jordanian intelligence operatives and sold to arms merchants on the black market.

At a subsequent NYT-blog it was stated that: “Sceptics of American efforts to arm anti-government rebels in Syria have long worried that weapons could be diverted to opposing forces or terrorists. But they did not expect diversion by members of Jordan’s vaunted intelligence service, which was working with the United States to train the rebels. Revelations, by The Times and Al Jazeera, of just such theft have shown how even a supposedly stalwart ally can undermine American interests and aid its enemies.” Sarah Leah Whitson, Human Rights Watch, Executive Director, Middle East and North Africa Division sighed in a tweet: “Seen this movie a 1000 times.”

The theft surfaced because the officers bragged about it and showed iPhones, SUV’s and other luxuries bought with the illegal earnings. Even after it became known to the Jordan government it was not ended directly, but only a few months ago when the US and Saudi Arabia started to complain about the dangerous malversations.

Jordan is seen as an island of stability in the region and strongly connected to the West. Even its Muslim Brothers are only a moderate nuisance. But others argue stability is not a guarantee. Corruption in the elites is one of the more prominent political issues. Even more so because revenues of the fraud are not drippling down. Ludo de Brabander argues in his last book ‘Oorlog zonder grenzen‘ that loyalty is also low because of the Jordanian government support for US policies in the region. He cites polls to underline his position, like the one of the PewResearchCenter in Washington D.C. It fits into the following worry “Jordan’s deepening involvement in Syria—including reports that it is permitting Israeli drone flights over its territory and welcoming deployments of U.S. troops—could feed protests, too.” The hesitance to participate in the war with its neighbours was large for this reason .

Jordan is a close ally for the Netherlands. In the past years it received large quantities of surplus arms (see table below). Then Minister of Foreign Affairs, the current European Union commissioner Frans Timmermans, was quite relaxed on the sale, because of the air warfare aspect of most of the delivered arms, such as the Cheetah. He said: “I do not worry too much about the offensive capabilities of this weapon system.” Ignoring the fact that the weapon is also armed with anti-tank (AT) rounds and that weapons seem to be creatively used in the wars in Syria and Iraq; AT weapons of a wide variety are used (for a list of weapons used by Syrian fighters see: https://en.wikipedia.org/wiki/List_of_military_equipment_used_by_Syrian_opposition_forces.) And to get rid of this laconically attitude a youtube video shows the weapon being used against ground targets.

Photo: A number of ex-Dutch YPR-765 pri, YPR-765 prat, M109A2-90 and a turretless M109 for driver training soon to be incorporated to the Royal Jordanian Land Force.

The Dutch government voiced some concerns on Jordan in connection with the sale of military equipment like trucks, air defence and fighter aircraft. The government wrote in a series of letters (see table below) that the Human Rights situation is better as in most countries of the region, but situation of prisoners isn’t good, rights of Palestine refugees are violated as is the freedom of press, opinion and gathering. The death penalty was introduced in December 2014 after a moratorium of eight years and 113 people are now on death row. But these facts were not decisive in granting the export license.

The Jordanian armed forces are not connected to those violations. And despite the regional problems and the influx of large quantities of refugees Jordan is relatively stable and part of the coalition against ISIS. The probability the trucks will be used against the population are minimal (thus not zero, MB). The F-16’s and armoured vehicles can not be used against the population, according to the government in The Hague.

This denies the use of fighter aircraft in quelling large civil uprisings, like in the Palestine Territories and Kurdistan. Recently fighter aircraft have been used in the War in Yemen committing war crimes (Jordan participated with F-16’s in the Saudi-led mission) . It also shows that nothing is learned from the recent Dutch ill-informed sales to countries in the region using Dutch armoured vehicles against civilians in streets of Cairo and Bahrain. Armoured vehicles are the weapon of choice in this kind of situations.

More specific information should be published to the Parliament in the future, such as which types are exported, with what kind of primary and secondary armaments aboard. YPR is a very vague description of a wide ranging family of armoured vehicles. Are they equipped with machine guns, small or middles seized cannons? This kind of information is essential to have an balanced opinion on the sales.

But seen the situation in the region and the wide dispersed sympathy for Islamist groups and antipathy for the sitting powers in the intelligence, security and military circles the diversion or illegal sale of armaments can not be excluded and sales of today will boomerang tomorrow. They already do. The Jordanian air force is pampered and equipped at the expense of other services, like intelligence. Herewith the loyalty will also erode and thus stability in the country based largely on the Jordanian General Intelligence Directorate (GID) ().

Sales add fuel to the chain of conflicts in the Near and Middle East. The report of the New York Times and Al Jazeera give a kind of peep review of what may lay ahead of us. No time for lacony on the side of the Dutch government when it wants to sell its obsolete weapons abroad. 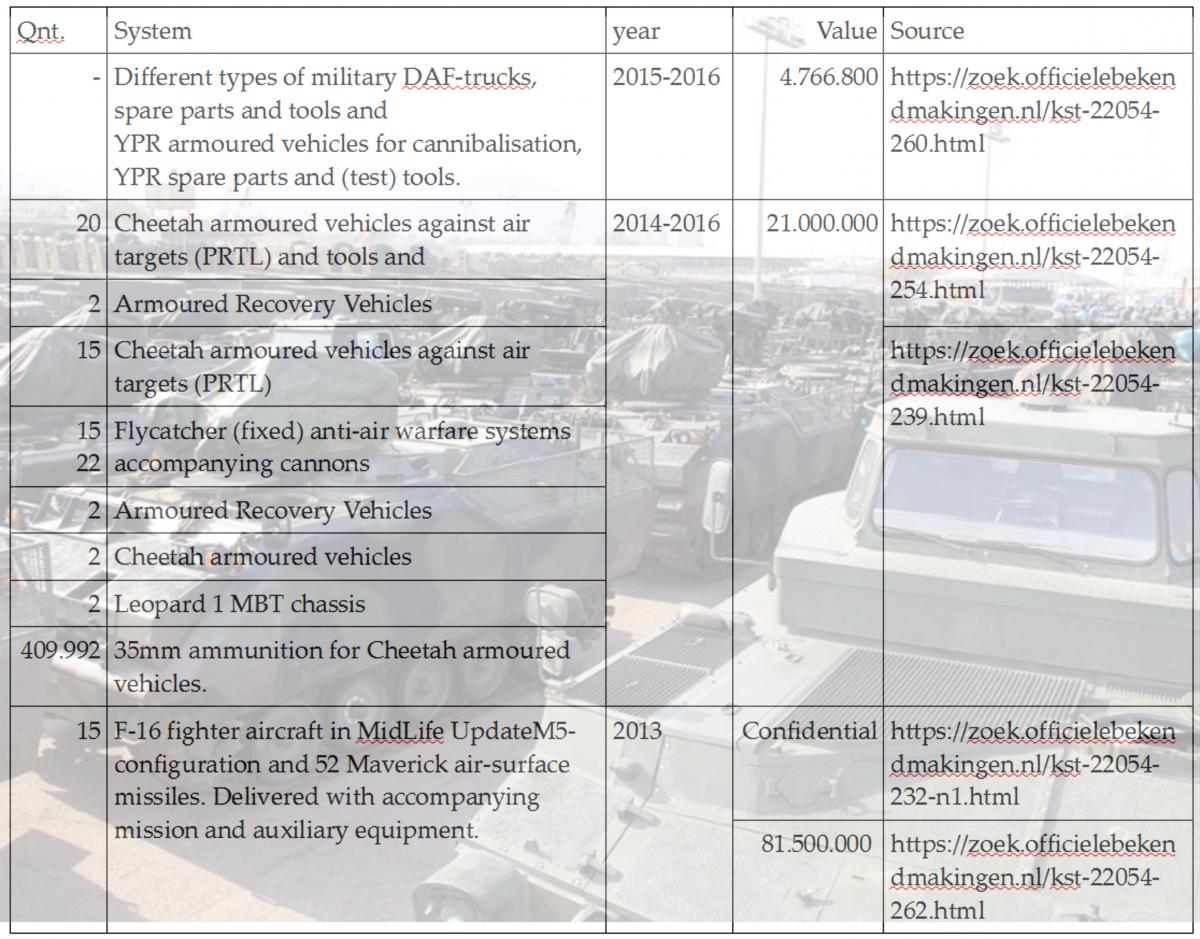