Dutch transit of Czech ammo to Guatemala; a country sliding “towards becoming a dictatorial state”

In the largest harbour outside Asia, that of Rotterdam, remarkable things happen. Sometimes questions must be asked, like in the case of a large shipment of bullets to Guatemala, a country with a horrible past which is still a chilling part of the present.

Guatemala was the stage of a civil war from the sixties into the ninety-nineties. The war ended with a peace process and in 1994 a Commission for Historical Clarification was established. In February 1999 the Commission published a report which found that 200,000 people had been killed or had “disappeared” between 1962 and 1996, the vast majority of them indigenous Mayans.

The military, state-sponsored civil patrols and clandestine death squads were responsible for 90 percent of the grave human rights violations committed during the conflict, while the remaining 10 percent of the abuses were attributed to the guerrilla alliance. The influence of this conflict is still felt as“the same weapons are still in circulation and wreaking havoc” according to journalist Ana Campoy. That the military is still connected to the violence is a regularly heard complaint.

In August 2018 Guatemalan president Morales announced not to renew the mandate of the Agreement between the UN and Guatemala on the establishment of an International Commission against Impunity (CICIG), which will end in September 2019. Human rights organisations noted that this decision was taken by the president while an investigation against himself is carried out to alleged illegal financing of his election campaign.

They also observe a climate of intimidation and harassment against the main human rights organisations in the country and, specifically, against their leaders. Police seeks to locate them and monitors their offices, clearly to intimidate them. Morales policy is “a major blow to efforts to fight corruption, abuse, and impunity“ writes Human Rights Watch.

Seeking for justice is full of danger in Guatemala. UN experts expressed concern about attacks on victims, plaintiffs and members of the indigenous community who participated in court hearings, as well as threats and attacks targeting justice officials involved in transitional justice cases.

In May this year Luis Arturo Marroquín was shot in the back by two men wearing hoods. Marroquín was a leader of a group of indigenous farmers defending people from evictions and pollution resulting from mines, hydro dams, logging, and palm oil and sugar cane plantations. The UK Guardian reports that the military and powerful political and financial figures with links to the drug trade, are behind the killing.

September 2018 indigenous rights activist Juana Ramirez Santiago (54) was the 21st human rights activist this year in Guatemala. She was a midwife and member of the Ixiles Womens Network, which provides psychological counseling, social help and birthing assistance to women in rural areas.

In September 2018, over a million small arms bullets of 22 different types were exported from the Czech Republic passing the Dutch largest harbour of Rotterdam on its way to Guatemala. End users are not mentioned. But it is legitimate to question who gets hold of the ammunition and if it fits human rights and internal security considerations of both the Czech Republic and the Netherlands, the last country providing transport infrastructure to this arms export. The questions must be raised in the light of a worsening human rights situation and targeted killings in the country.

The Dutch government reported recently about its policy on the transit of arms (see answer 57, in Dutch). This policy consist of three elements: the transit control follows the policy of allies; arms transit permits are monthly published; and it is controlled if a consignment appears to change from its declared destination at the time the export license is isued.

But in the case of Guatamala the Netherlands cannot hide behind the back of its Prague ally. The destination of the ammunition is too sensitive. There is a number of extra possibilities in the official Export Control User Guide on Strategic Goods and Services to stop a transfer like this. Such as “when international law or related agreements so requires or when the Minister for Foreign Trade and Development Cooperation deems it to be necessary in order to protect the essential interests of national security.”

And if willing, a Dutch Minister can even do more. In case of transition of ammunition to Saudi Arabia the former Minister of Foreign Trade Ploumen contacted Prague to report the Dutch dislike of such transits. It it worth considering repeating this line of action in the case of Guatemala. At least Ploumen’s predecessor Sigrid Kaag should learn who received all those bullets. 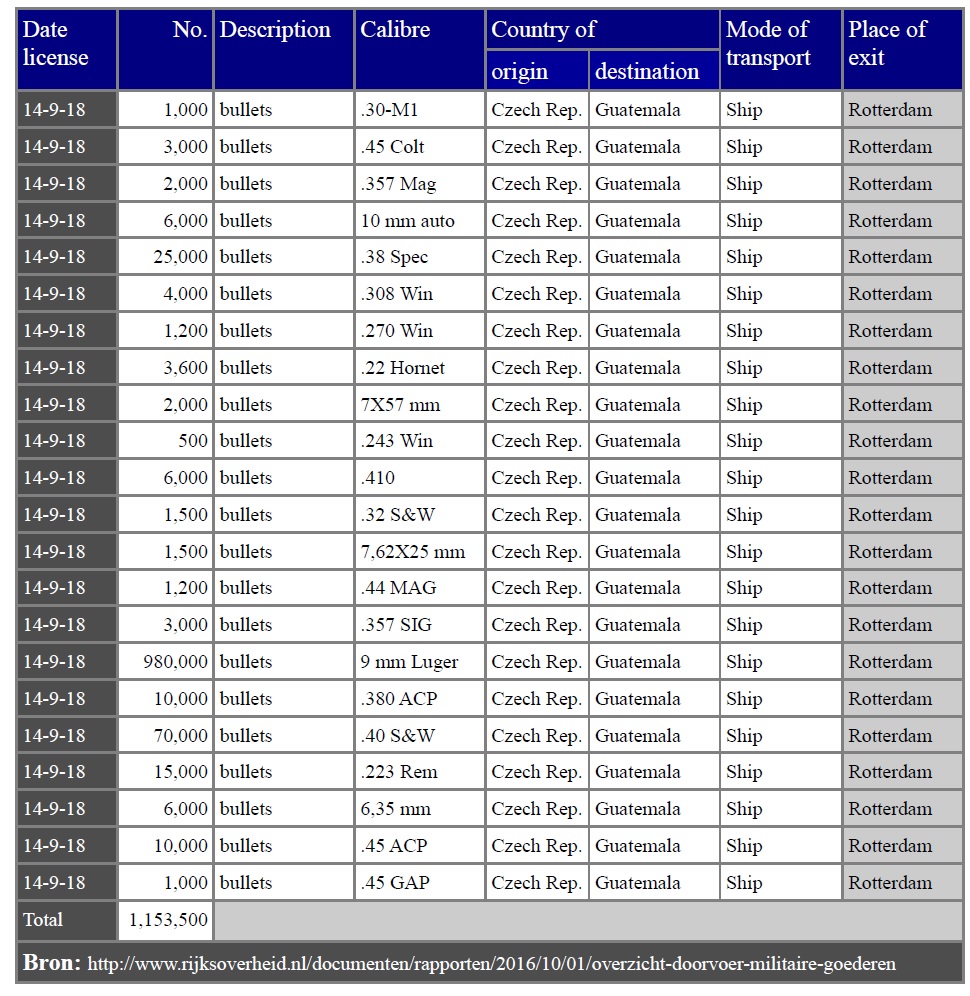