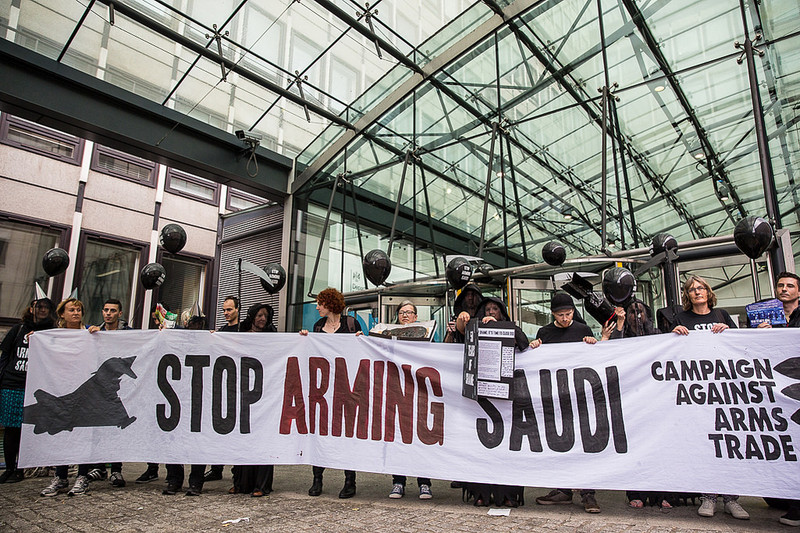 Since the peace agreement of half a year ago the situation in Yemen has only worsened: new frontlines, more people homeless and not enough supplies to help those in need. With the recent surge of the conflict in Aden the war has become even more complex. The United Arab Emirates (UAE) has withdrawn its troops but first it established a network of mercenaries and tribal militia in Yemen’s southern regions. “Even though the UAE is downsizing its military presence, Abu Dhabi does not wish to surrender its influence in Yemen (…) To preserve its favourable strategic position, the UAE will selectively engage in counter-terrorism operations in Yemen, assist its proxies in their efforts to consolidate hegemony over southern Yemen” wrote journalist Samuel Ramani. Last year, journalists found Western arms militias, among them German G3 rifles, Swiss grenades and Belgian FN Fal. According to Ramani the UAE will “expand its diplomatic involvement in Yemen. These actions will help ensure that UAE-Saudi Arabia relations are not severely damaged by Abu Dhabi’s unilateral withdrawal (…) “Abu Dhabi’s withdrawal announcement was aimed, in part, at salvaging the UAE’s tarnished reputation,” Meanwhile the European Union is not only an important source for the weaponry of the UAE, but also its most important trading partner in 2018. For the Saudi’s, the Union is also its most important economic partner, far ahead of China and the United States.

In face of the low human rights standards in both countries the EU is divided. Countries like the UK and French are major arms providers. And for all European Union members taken together the KSA is the most prominent destination for arms in a twenty year period (1998-2017). Riyadh imported European military products valued €16.1 billion (the next destination for EU arms, the United States, received arms valued €13.5 billion.)

French Thales had not changed its position on investing in Saudi Arabia, the New York Times reported in the wake after the Kashoggi murder shock: “Thales has 700 employees in the kingdom, which it supplies with military hardware, missiles, electronic warfare systems and even high-tech security surveillance systems for Mecca and other holy sites.” President Trump advertises every sale (past, present and future) as if it is a credit for his America First policy, overestimating the size and the jobs it will bring to the US. The fact that the desert Kingdom was the cradle of the 9-11 terrorists, which prompted the War on Terrorism, is completely and deliberately overlooked. The UK government was told by the Court of Appeal that it was unlawful to have granted arms export licences to the Saudi’s without making any assessment as to whether violations of international humanitarian law had taken place. But the UK government is already appealing the verdict.

Why do Western countries acts so uncivilised? First of all, there are the economic motives for the weapon manufacturers, such as lowering relative research and development costs by increasing the scale of production through exports. The Gulf countries are easy costumers as they are rich and hungry for weaponry. UK International Relations expert David Wearing investigated the economics behind the Anglo-Arabian relationship and exposed how the City is dependent on petrodollars at the expense corruption, human rights violations and a sound economic policy, and UK arms sales are part of this relationship.

But selling arms is also forging long time ties between militaries, defence industries and governments. These ties affects all other relations. The French for example have their only foreign base outside Africa in Abu Dhabi, which makes their arms relation with the Emirates of huge importance. L’Observatoire des Armements details relations between Paris and the region and notes that 60 per cent of French arms exports go to the Gulf. The French help the Emirates to strengthen its footprint in Africa. The US recently started to expand its military installations in Saudi Arabia in connection to its Iran policy. Regional allies in one of the most volatile regions of the world are kept close for strategic reasons even if morals and ethics ask to do otherwise.

Some countries have more restrictive policies. Recently, the Italian branch of RWM officially announced the end of export of bombs from Italy to Saudi Arabia and the UAE. There are also restrictive policies in Finland and Germany. The Dutch government has a restrictive policy too, but deplores the negative consequences for the Dutch defence industry. Thus it is no surprise that the government recently informed the parliament that it will relax its policy on arms sales to Egypt, although eight days before the country was referred to as violating international humanitarian law. Egypt is an important customer for naval equipment from Thales Nederland, key branch of the French defence giant. The Dutch example shows that good intentions to make ethics more important are vulnerable to pressure from industry interests. Also from Germany controversial arms exports still go to Saudi Arabia.

Pieter Wezeman of SIPRI Arms and Military Expenditure Programme said to Inter Press Service: “If, (very hypothetical) the USA and the UK would stop supplying arms to Saudi Arabia, this would be a major problem for Saudi Arabia, in military and financial terms.” He pointed out that Saudi Arabia would find it very hard to maintain its military equipment without the support of the large numbers of US and UK service personnel in the country. The same will be true for the contingent working for Thales. Ending arms trade to the Saudi’s, the Emirates and other coalition countries fighting in Yemen would be a significant step to peace. The arms export and foreign policy of the European Union is a paper tiger when it comes to moral policy.