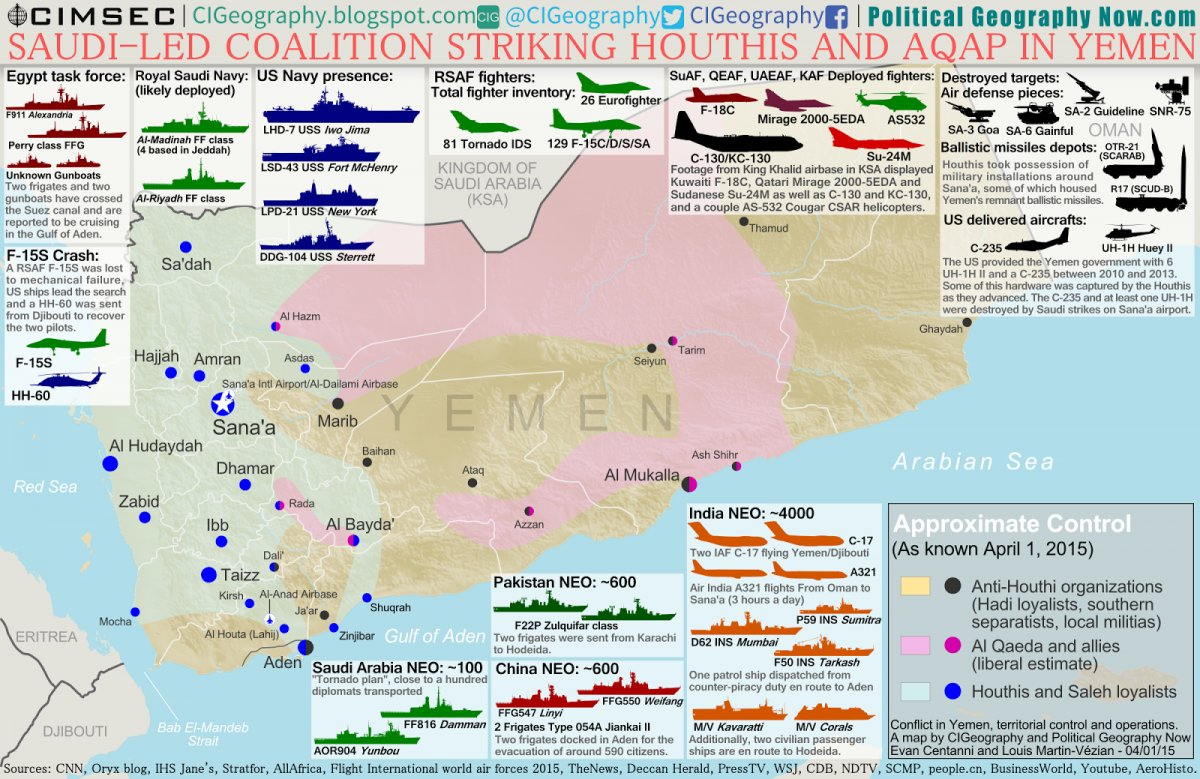 A coalition of 10 countries, including the Gulf Cooperation Council (GCC), is  fighting in Yemen against Houthi rebels who forced Yemen’s government into exile. Dutch weapon systems are playing an invisible but important role in this war; many of the participating navy ships are fitted with Thales Nederland fire control radar. Analysts say the war is not about Yemen’s internal situation, but a proxy war between Saudi Arabia and Iran. They warn that the only winner will be terrorist groups like al-Qaeda in the Arabian Peninsula.

The Yemenites are confronted with destruction of their cities, infrastructure, and the scarce industrial facilities. Not to mention their deads, by heavy aerial and naval bombardments on cities. The US had to ask the Saudi’s to narrow the scope of attacks.

The coalition against the Houthi’s is actively sponsored though by US arms deliverances and fights with weapons sold by European countries as well (in the EU consolidated report on arms export 2013 Saudi Arabia was the second most important customer for EU-weapons, only after the US, with almost € 4 billion in one year). The United Nations installed an arms embargo against Yemen and – unsuccessfully – called to stop the fighting.

When Iran sailed to Yemen with two naval vessels, the destroyer Alborz and the axillary vessel Bushehr, it made headlines in the papers. What was not mentioned was that the Alborz is built at the British Vickers wharf as far back as 1969. The ship is one of a class of five (two others are more recently built in Iran). Sold at their time to the Shah, for the most part of their lives the ships have belonged to the Islamic Republic. In response to the deployment of the oldies the US has send the aircraft carrier Theodore Roosevelt and the cruiser USS Normandy to the Gulf.

The Gulf Cooperation Council coalition and their friends are deploying a wide array of war planes and naval vessels (see illustration Business Insider). Jane’s Defence Weekly of April 15, 2015 reported that the assets contributed by the countries involved ‘remain vague’. The military magazine stated however that countries like Jordan are deploying jets and mentioned photo footage of Egyptian, Jordan and Bahraini F-16’s taking part in the war. The kingdom of Jordan got 18 F-16’s from the Netherlands and 9 from Belgium. Thus over a third of its 79 F-16 air frames came from the Benelux.

Due to offset policies of the past decades even the other F-16’s used by the coalition are equipped with Dutch technology. The Eurofighters (EFA/Typhoon), which the Saudi’s use in the operations, are a product of BAe Systems, Finmeccanica, and Airbus, the last company based in the Netherlands for tax reasons. The use of these planes was reported by UK media. Naval missile systems used (like Sea Sparrow, Harpoon) might also have Dutch components.

The map of the region shows that Yemen’s shoreline is almost as long as its land borders. Its beaches along the Gulf of Aden and the narrow entrance to the Red Sea are the route to the Mediterranean through the Suez canal. No wonder naval vessels have been deployed and used by the coalition in the Yemenite waters. It is also expected that Pakistan will join the fleet to enforce the naval blockade, but mission creep is already feared. It may be a method to circumvent the Pakistan Parliamentary opposition to join the forces against Yemen. The newest surface naval vessels of Pakistan were built by the Peoples Republic of China and fitted with Dutch military communication and combat data systems. Its Oliver Perry class is fitted with a Thales Netherlands derivative, the Perry Mk 92 fire control radar (Signaal WM28).

Above all, it is Egypt which is involved in the operations against the Houthi’s. It owes this to the Saudi’s, because of the generous donations made to al-Sisis by the House of Saud – the most recent donation of March 2015 worth 4 billion. Cairo has also its own reasons; the Suez Canal earns Egypt about $5 billion a year, a vital source of hard currency for a country that has suffered a slump in tourism and foreign investment. It is no surprise that the country has sent its navy to Yemen.

In early April reports turned up that the Egyptian navy fired missiles on Yemen. Of this navy, the guns come mainly from the US, Sweden and Italy. The radar, combat systems, and parts of missiles may be produced in the Netherlands. Jane’s mentions the frigate Alexandria (formerly the Mubarak) fitted with Mk92 fire control radar and the fast attack misille craft Ezzat Awent fitted with Thales Nederland Scout data processing. At a Parliamentary round table on arms export april 13 however Thales Netherlands pretended not to understand why the Dutch government hesitated with giving permission for the export of Thales products to the wharf building Egypt’s naval vessels.

Currently, work begins on Egypts Gowind corvette. Thales Netherlands will not only deliver its surface search radar, but also a crucial element of its direct fighting capabilities the target designation radar.