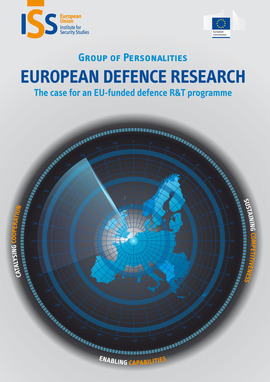 On 25 February a so-called ‘Group of Personalities’ (GoP) released the report ‘European Defence Research: The case for an EU-funded defence R&T programme‘. It argues for the inclusion of military research in the next round of the Framework Programme for Research and Technological Development, the EU instrument for funding research projects. The report was written at the request of the European Commission.

The Group of Personalities (GoP) that wrote this report, consists of 16 members. Nine of these are industry representatives (from Indra, MBDA, Saab, TNO, Airbus, BAE Systems, Finmeccanica, Frauenhofer and Liebherr-Aerospace Lindenberg). Also participating is Federica Mogherini, High Representative of the EU for Foreign Affairs and Security, who is also head of the European Defence Agency. Civil society is not represented in the group.

The EU has been funding industrial research under Framework Programmes for many years. The current cycle, called Horizon 2020, is running from 2014 to 2021. While military research has been exempt from EU-funding until now, the military and security industry already found their niche in the ‘security’ part of these programs, with hundreds of millions of euros of annual funding. The security research program was set up on advice of another ‘Group of Personalities’ which was also dominated by industry representatives.

Claiming the EU needs to bolster its military posture and that support for defence industry would create many jobs, the European Commission first proposed EU-funded military research in the summer of 2013. Two years later the Commission announced the launch of a pilot programme: the Preparatory Action (PA) on Common Security and Defence Policy (CSDP)-related research, to start in 2017.
In the meantime, in March 2015, Elżbieta Bieńkowska, Commissioner for Internal Market, Industry, Entrepreneurship and SMEs, set up the ‘Group of Personalities’. The objective was clear from the start:  “Securing the long-term future for our defence industry is in all our interests. Both nationally and collectively. The Commission can play an important supporting role to reinforce national defence industries and research capacities.”

The Group of Personalities is enthusiastically elaborating on this in the recently published report. It starts with alarming language about the perceived state of the European military industry and the way this supposedly threatens European security. It stresses that EU funding for military R&T (a European Defence Research Programme (EDRP)) is necessary, also “in view of the possible need to strenghten Europe’s overall military posture” and to create a “level of strategic autonomy”. More spending on R&T is needed now, or else “the required capabilities”, build on “ decades of hard-earned experience on how to develop effective leading-edge knowledge-based military systems”, “will have dissipated”.

Against this background existing spending on security research is clearly considered not enough: “The current framework for security research within Horizon 2020 […] is providing only limited support even to dual-use projects, even in those pillars such as ‘Border and External Security’ where the technology required can be similar to (or derived Europe’s defence research: the EU’s added value from) that used for defence capabilities, thus missing out on opportunities to enhance interoperability between civil protection and military forces. These instruments may also need to be refocused, adjusted and better coordinated if they are to produce any significant benefits.”

– For the Preparatory Action (PA) “a balanced approach should ensure that foreground IPR [Intellectual Property Rights] be vested in the consortium partners in the case of grants, that background IPR be protected and that the recipients make a package of information available to the EU and member states explaining the aim of the research and summarising the results achieved.”

– “[…] only legal entities in the 28 EU member states (plus Norway) should be eligible to participate.”

– “The PA should aim at providing full 100% coverage of the eligible direct costs, plus a percentage higher than 25% – and surely no lower than that of non-EU competitors – for additional costs. Options for co-funding by member states should also be considered […].”

– “The PA/EDRP should […] be part of a broader European defence policy framework […] aimed at facilitating and enabling defence cooperation at all levels.”

– “[…] the PA should lead to a major dedicated EDRP as part of the next Multi-Annual Financial Framework (2021-27). […] the EDRP will need a total budget of at least 3.5 billion euros for the period 2021-27 in order to be credible and make a substantial difference.” (“[a] budget large enough to make a real difference, but without leading the member states to further reduce their national defence budgets.”)

– “[…] findings and results [of the EU-funded defence R&T framework programme] should be supported which are meaningful enough to stimulate subsequent multinational and national development acquisition programmes”, while “it is essential that research rests upon sound market principles. Its results must have market potential, be cost-effective and boost industrial competetiveness together with cooperation.”

According to the GoP this should all be accompanied by a large role for the military industry: “To assist with the preparation of the EDRP, the logic of the Group of Personalities should be transferred to a dedicated ‘European Defence Advisory Board’ (EDAB). This board would advise on all aspects of the Defence Action Plan, give strategic guidance on the principle, structure and modalities of the EDRP, inform its research agenda, and play an active part in the definition of a long-term European military capabilities blueprint, building on the ongoing debate about a possible European defence ‘White Book’. Such an EDAB would also have direct access to the highest level of the EU institutions to ensure clarity of purpose and consistency of action in the preparation and negotiation of the next MFF. ”

So, in short: the European military and security industry wants at least half a billion euros a year to fund military research, from which the results can largely be kept secret, with the industry having a large say in the way European military policy is going to be shaped in the next decades. The report ‘European Defence Research’ is a shameless piece of self-promotion and demanding money and other support, without even touching on the question what military research will contribute to improving the lives of people in and outside the EU. Nevertheless, just as earlier with the set up of EU-funded security research, it has to be feared that this report will indeed form the basis on which EU-funding for military research will move forward.