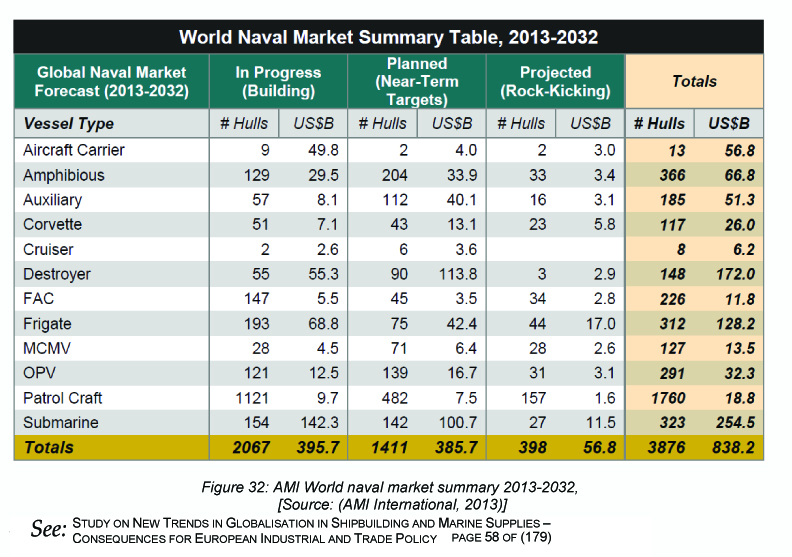 According to a study written for the European Commission, the average share of Europe’s naval industry is more than 60 percent of the global export market over the period 2005-2014.

The European naval industry takes 25-30 percent of the total production value of the whole maritime sector. Only the US with 60 percent has a higher percentage (but the US has a very small merchant marine sector and king size navy). Large countries like the US, Russia and Japan build their own vessels. But others are dependent on imports and thus on countries willing to export. 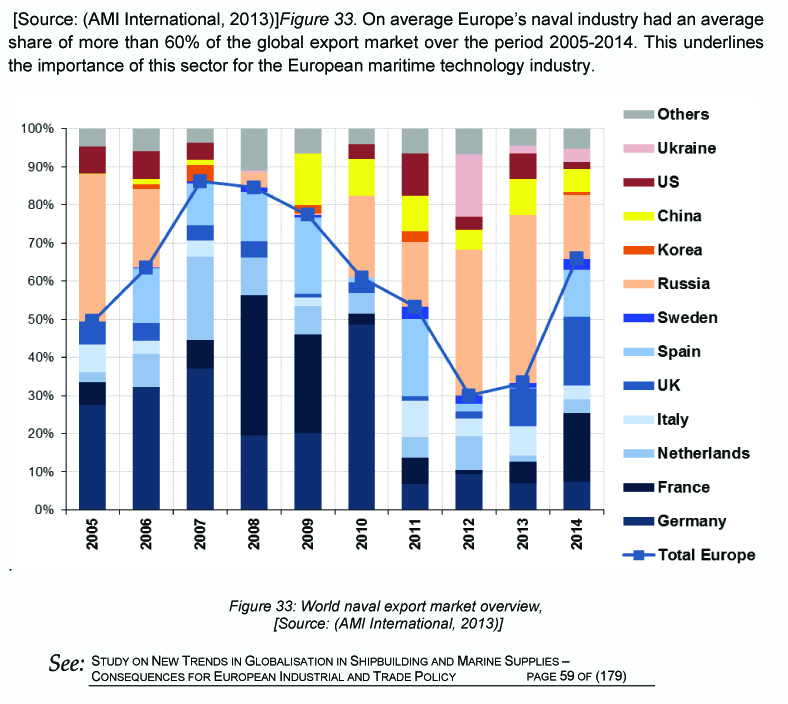 Naval vessels can be used for a range of tasks, depending on size, shape and weaponry. Naval operations seldom catch much media attention and are only noticed when MoD’s report them. Even critics of the arms trade often do not mention them as their role in Human Rights Violations is barely surveyed (the naval blockade of Yemen as the exception). However they fit for tasks on all levels of conflict and war and are deployed at home (to patrol and defend coastal waters or to remove mines), for diplomacy or power projection, to secure shipping lines, be part of missile defence systems, transport troops or fire missiles and grenades at targets ashore.

Naval ships are the most expensive single weapon systems in the military inventories. The price range is wide: from tens of millions of euro’s for a patrol vessel to more than € 10 billion for the newest single US aircraft carrier. Overall the global market for naval vessels is projected to be around a € 670 billion over the period 2013-2032. Labor costs accounts for 32 percent of a surface – excluding submarines – combatant vessel and material cost for 11 percent. The lion share, 57 percent, is for equipment (weapons and systems).

The EC “Study on New Trends in Globalisation in Shipbuilding and Marine Supplies – Consequences for European Industrial and Trade Policy” was intended to be on the civil maritime sector only, but because of the importance of the military maritime sector a chapter has been included on naval. The report recommends to carefully preserve and nurture the “distinctive strategic asset of the European Naval defence technological and industrial base” because of it innovative and system integration qualities. So it is hardly surprising that the first European cooperative project of the Europan Defence Fund is a naval project: OCEAN2020. The aim of this project is to integrate drones, command and control of naval vessels by satellites to land centra. The project involves 42 companies from 15 countries, including the Israeli company IAI. Italy’s Leonardo is the leading company.

Leonardo is also consolidating its naval branch by expanded cooperation with the French Naval Group. In the past the Italian and French companies worked together developping the FREMM frigate, deployable for “a multitude of missions, from escort duties to naval gunfire support.”  FREMM frigates are exported to the US, Morocco, Canada and Egypt. The Gowind-class is a smaller variation of this frigate developed by the Naval Group. It is exported to Egypt (a deal contested in court by peace groups in the Netherlands) and Malaysia. On top of that, Leonardo has its own range of frigates and corvettes for sale.

Italy and France edge closer to merging their largest military shipyards. “Leonardo has proposed a plan designed to ensure his products are used on future Italo-French warships,” like the Athena Combat Management System (CMS). Such a development could erodes the position of French/Dutch company Thales which is also producing naval equipment.  Up to now Naval Group ships are equipped with the Setis CMS (based on the SENIT CMS designed by DCNS and Thales). Last year Italian observers expressed their fear that Thales will continue to have the upper hand because it holds a 35 percent stake in Naval Group, meaning it will have a seat at the table in talks on choosing systems. This naval industry competition is an issue for bilateral tension.*

The European naval industry is reshaping itself. While Italy and France go together, late March the Netherlands and Germany had a meeting to streamline naval acquisitions and production. Thales among others was present at that meeting and has its technology on offer. (For more on the Dutch involvement, see here). Probably Dutch acquisition plans for new submarines (the German catch) and the building of small frigates for the German navy (probably a Damen / Blohm & Voss project) were on the table. The small frigate Germany wants must be a multi-purpose combat ship (“Mehrzweckkampfschiff ” in German).

It may board missile defence, air and surface warfare and patrol capabilities. Germany wants to buy six of them. In 2011 their price was said to be 55% of the € 650 million F-125 frigates, so approximately € 360 million. Damen and Blohm & Voss have the perspective of winning the deal, although they are still competing with German Naval Yards. Considering its price and capabilities it will be an exportable ship, but it will have to compete on the market with the French/Italian FREMM and French Gowind-classes.

To create even more pressure on the market, BAE Systems recently introduced the Type 31e (‘e’ stands for export). “We have a global campaign plan for the Type 31e program and have identified opportunities in more than 20 countries,” a spokesperson of the vessels project said to Defense News .They also will be build for the UK navy and cost almost € 300 million.

In a total different price class, the US is selling 4 Littoral Combat Ships, also a frigate-like ship, a derivate of the French/Italian FREMM-frigate. These will cost about US$ 1.5 billion each. Saudi Arabia has a potential requirement for a total of 8. But countries which are not interested to keep themselves as close to Washington as Riyadh does, and which have no petrodollars to pay for this relationship, but still want an affordable technological advanced small frigate, will turn to Europe. (China will be a future competitor on the market.)

The European competition in naval ship export will lead to bargain prices for exports to countries in regions of tension and even to countries who use them to enforce operations against other countries, like Egypt does. The ships may sail by unnoticed, but they are putting a burden on national budgets, might be used in human rights violations and are endangering stability in the regions that are buying them.

* In LCF fregatten en het nucleair evenwicht (Air and Command Frigates and the nuclear balance, Stop Wapenhandel 27 september 2017) more on the conflicting interests of Thales and Leonardo on naval technology.