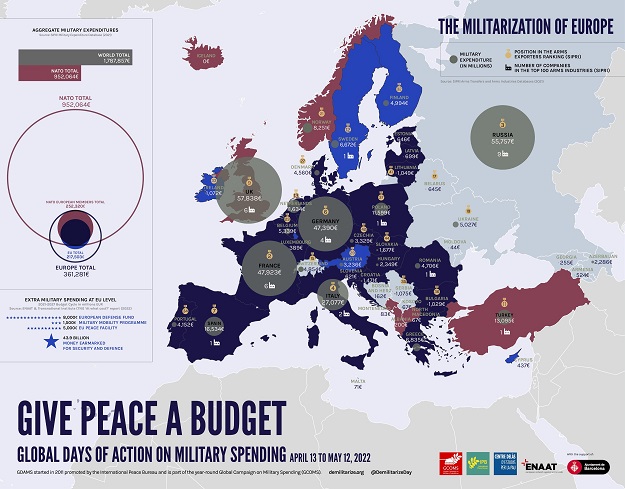 Press release 09 05 2022 Brussels – On Europe’s day, the Global Campaign on Military Spending and the European Network Against Arms Trade call the EU to revert back to its initial aim: preserving and promoting peace through non-violent means. The EU should choose peace and stop feeding the global arms race.

The Member States of the European Union have been increasing their military expenditures for several years now, culminating to €217 billion in 2021, and up to €275 billion if the UK is included. This makes the EU-27 Member States and UK collectively rank second on the global scene, after the US and before China, and spending almost 5 times more than Russia.
Both Europe and Russia have increased their military spending continuously since 2014 and following the annexation of Crimea by Russia. As history has consistently shown, this keeps contributing to a “security dilemma” where all sides feel increasingly threatened, whether justified or not. This could only lead to a military confrontation in which the Ukrainian people are the first victims.

Today the EU is cynically exploiting the invasion of Ukraine as an excuse to accelerate its militarisation and its support to the arms industry, a process which started way before the war. On top of national military spending, the EU will put several billions of Euros to support the arms industry, the development of cutting-edge armament as well as their transfer within and outside the EU.

In 2021-2027, €8 billion will go to the research and development of the next generation of weaponry, 1.5 billion will go to the mobility of military goods and troops across the EU, and at least €5 billion will largely be used to ‘deliver’ weapons to partner countries outside the EU. This latter amount channelled through the alleged ‘European Peace Facility’ may be substantially increased if Member States decide so, considering that a significant part of it has been already used to reimburse arms deliveries to Ukraine.
Furthermore, the arms industry has been trivialised to the extent that it now has access to most EU funding schemes as a ‘normal business’, from social to regional or environmental programmes. Hundreds of millions of Euros will therefore also be used to subsidise this controversial sector without prior control.

This is all the more worrying as this money will mainly benefit the major arms industry groups, many of which are among the top 100 companies in the sector, and therefore major exporters. And these companies are based in European countries that are themselves among the biggest arms exporters.
For example, 59% of the funding allocated so far by the EU Defence Fund in 2017-2020 goes to 15 major beneficiaries (the top 5 being Leonardo, Indra, Safran, Thales, Airbus), and many of them are involved in controversial arms exports, in serious corruption allegations or in the production and maintenance of nuclear weapons. More than two thirds (68.4%) of the allocated budget goes to the ‘big four’ countries: France, Italy, Germany, and Spain, which rank respectively second, fourth, sixth and seventh in the SIPRI arms exporters ranking.

By exponentially increasing its subsidies to the arms industry, the EU is largely feeding the global arms race, which in turn fuels conflicts worldwide. By doing so, the EU is betraying the vision of its founding fathers to prevent a new arms race; the EU should rather exponentially increase its funding for non-violent means of resolving conflicts and tensions, which are largely underfunded, and promote a new world order based on sustainability, justice and human security.

More information can be found here:

GCOMS/GDAMS website: www.demilitarize.org
ENAAT website: www.enaat.org
The Global Days of Action on Military Spending (GDAMS) are an initiative of the International Peace Bureau (IPB). The first edition took place in 2011. The 2022 edition started on April 13 and ended on May 12.
The European Network Against Arms Trade (ENAAT) was founded in 1984 and involves groups and individuals who see the arms trade as a threat to peace, security and development. It is made up of 20 national campaign and research groups from 13 European countries and 3 European or international organisations.