It is expected the European Parliament will adopt a resolution on Thursday November 30, on on the situation in Yemen. A concept version states:

“[The European Parliament] strongly criticises the intensive arms trade of Member States with various countries in the region, as in the cases of the UK, Spain, France and Germany; calls for an immediate suspension of arms transfers and military support to Saudi Arabia and to its coalition partners; reiterates its call on the Council to impose an EU arms embargo against Saudi Arabia given the serious allegations of breaches of international humanitarian law by Saudi Arabia in Yemen and the fact that the continued licensing of weapon sales to Saudi Arabia would therefore be in breach of Council Common Position 2008/944/CFSP of 8 December 2008.”

But not all arms trade is easily visible. Buying large military products often includes program participation (the difference with offsets is almost non-existent). As is the case with the biggest arms project of the moment: the development, production and overhaul of the F-35 Lightning II, still better known as Joint Strike Fighter or JSF. Only for the US the project runs into US$ 400 billion acquisition costs and over US$ 1.000 billion sustainment costs. It participation policies are exceptionally clear.

Defence industries are taken on board to produce parts of the bigger system, sometimes even before a government decides on buying. Brussels has not decided yet on the acquisition of the fighter, but recently Zaventem based Asco was offered the production of small part for the wing flaps for the F-35. The Asco wing flap parts will be transported to Fokker GKN in the Netherlands for assembling. The wing flaps are then delivered to Lockheed in the United States, where they are to be fixed to F-35’s for the Pentagon or for export.

Export destinations are partner countries in the Lockheed F-35 programme and a growing number of global customers. Suppliers in all nine partner countries (Australia, Canada, Denmark, Italy, Netherlands, Norway, Turkey, UK, US) are producing F-35 components for all aircraft, not just for their own country. F-35 parts are exported around and thus arms control issues are at stake.

The incongruences with the EU common position on arms exports is at stake because Turkey is one of those nine. Ankara is known for its regular use of fighter jets in the airspace of neighbour countries and against Kurdish targets, both civilian and military. Recently Turkey’s participation in the F-35 programme was made an issue because the country wants to buy major Russian air defence missiles. As a NATO country, it is not forbidden to Turkey to do so, but the NATO alliance considers it undesirable. Participation in the F-35 was used to pressurize Turkey back into alliance procurement discipline. Turkey responded with a threat to remove an important US NATO radar station from Turkish soil when the fighters jets will not be delivered in time. Involvement of Turkey in the F-35 program is also controversial for human rights reasons. Die Linke in Germany demanded a full stop on arms sales to Turkey, as did the Greens during the Jamaica coalition negotiations.

Besides partner countries, there also countries participating in buying the F-35 through the US Foreign Military Sales (FMS) programme, such as Israel, South-Korea and Japan. Like Turkey, Israel is also not very restrained when it comes to using its fighters against neighbours like Syria and in ‘internal’ affairs such as the occasional bombardments of Gaza.

Countries not participating in the programme or in FMS can buy the fighters as normal costumers. Belgium, Finland and Germany seem to have an interest. And recently several countries participating in the Saudi-led war coalition against Yemen where mentioned as potential customers by the United States.

Vice Chief of Staff of the U.S. Air Force general Stephen Wilson told Flight Global that the US is looking in the Gulf for countries like the United Arab Emirates (UAE) to sell the F-35. “So the discussions are ongoing now with the new administration on selling F-35s to partner nations that need them and require them.”

Also Bahrain, the authoritarian peninsular connected by a dam to Saudi Arabia (KSA), is regarded as a potential client for the F-35. According to US Defense News it may be a replacement for its ageing fleet of F-5’s and F-16’s (although this fleet is just updated in a billion dollar deal).

Bahrain and the UAE are both taking part in the air force operations on Yemen. Bahrain even lost a fighter plane in December 2015. The Emirates recently did send out this message showing its cost and involvement in the war: “UAE Armed Forces has announced the martyrdom of two Air Force pilots. (…) They died in the line of duty while carrying out their mission in Yemen.”

The disasterous impact of the Saudi air campaign for people and infrastructure in Yemen is well documented. But despite this the fighters might even be sold to Saudi Arabia. “The US would consider selling F-35s to the Saudis if the Saudis were not a threat to Israel. And an indication they are not a threat to Israel would be for Saudi Arabia and Israel to take part in the same third-party air exercises” Simon Henderson, director of the Washington Institute’s Gulf and Energy Policy Program said. On the UAE deal Israel is considered to play a similar role. Flight Global regarded that: “Israeli objections could also quash any potential sale of the F-35 to the UAE.”

The European Parliament adopted already several resolutions calling on the Member States to impose an arms embargo on Saudi Arabia for its role in Yemen. The situation has not improved since. Some Member States have a restrictive policy to Riyadh. But even those may be on the brink of delivering components, because of the participating in the programme. The US will take the political criticism of its export to KSA. It does not consider this a big deal. It is already overtly and militarily involved in the Saudi war atrocities and is refuelling e.g. planes bombing Yemen.

Remarkably, it is political concerns of Jerusalem that are key in decisions to deliver to the Gulf states or not. Restricted arms export policies towards KSA of EU allies involved in the F-35 are even never referred to and these countries keep silent themselves. It seems on the F-35 there are more important issues at stake than regional security and human rights; even for capitals such as Oslo and The Hague with rather restrictive policies for arms sales to the region.

Core EU members produce for the F-35 fighters and slavishly adapt to the US vision on who to sell it to. Hopefully the upcoming resolution urging Member States to impose an arms embargo on Saudi-Arabia is not dead before tabled, but comes to live; a clear no to F-35 exports to the war-involved Gulf countries should be part of that. 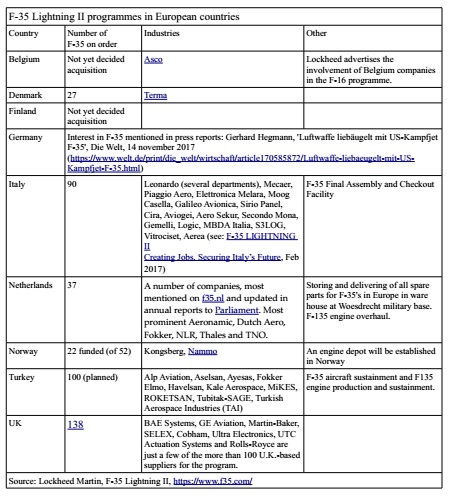