There are 3 different types of the F-35: the A, B and C variants. Most countries buy the F-35A, the lastest generation of a conventional fighter aircraft. The F-35B type has the capability for short take off and vertical landing (STOVL), which makes it a ideal type for short-field bases, small aircraft carriers and large amphibious ships. The C type is meant to be stationed on large aircraft carrier, of which only a handful sail the seven seas, most in the US Navy. The B type will be in use of Japanese, Italian and UK Navies. South Korea is studying if it will introduce them for its amphibious ships and in Australia debate is started on the adaptation of Canberra’s major amphibious assault version for the F-35B fighters jets.

EU defence industries are involved in the production of all three types of the F-35, a fighter jet meant for the highest spectrum of military action; for breaking the first defence line.

The two naval versions mean that the fighter can be distributed over a larger number of vessels, not only on real aircraft carriers, but also on helicopter carriers and large amphibious assault ships. This has financial as well as strategic advantages. Aircraft carriers cost a lot and are vulnerable. Using amphibious assault ships is increasing the number of de facto small aircraft carriers. It enables a wider number of ships to be used for employment of F-35’s tasked with the destruction of coast defences needed to make an invasion possible. The US is following that path. Japan recently increased its order and will install the F-35B aboard its Izumo class helicopter carriers. A Chinese websites predicts the second Korean amphibious helicopter assault ship will be equipped with the F-35B. In Europe the UK and Italy bought them, and Spain and Turkey are potential customers.

Japan, although it recently lost a F-35 Lightning II fighter jet, increased its order for the naval variant earlier in 2019. Tokyo is so far the only US ally in Asia to own the F-35Bs. With these jets the Japanese navy conversed its amphibious assault ships into small aircraft carriers and turned the maritime defence force into a lethal navy. The conventional version of the F-35 is regionally in use with Australia, South Korea and Singapore.

It may sound as an Asia-Pacific affair, but the issue is nearer to us than we often realise. China is rapidly made into the most important adversary for the US and its allies. “Some are concerned about the size of China – well, China is big, that’s fair. But, NATO – meaning one billion people – Europe and North America together – is really a big Alliance, which is able to cope with all threats and challenges we face in the world today. As long as we stand together” Jens Stoltenberg, Secretary General of NATO recently stated, making Beijing an argument for all NATO members to stay aboard.

The old roman adagio si vis pacem, para bellum (If you want peace, prepare for war) is followed closely by NATO and its Asian allies with the development of the most costly weapon system ever (valued in trillions). The F-35 is part of emerging military strategies for breaking through the military defence systems of enemies of the West, notably Iran, Russia and China. Those countries have embarked on a defensive strategy which the military calls anti-access/area denial (AA/AD).

The F-35, especially the naval versions, will belong to the major weapons to break Chinese extended border defences. China has a densely populated coastline of 14,500 km and is very close to the Sea of Japan. Therefore part of the new Cold War on China strategy is focussed on entering it from the sea. China is strengthening its coastal defences. The most well-known are the chains of islands China sees as its defence in case of foreign military intervention or conflict (see map). 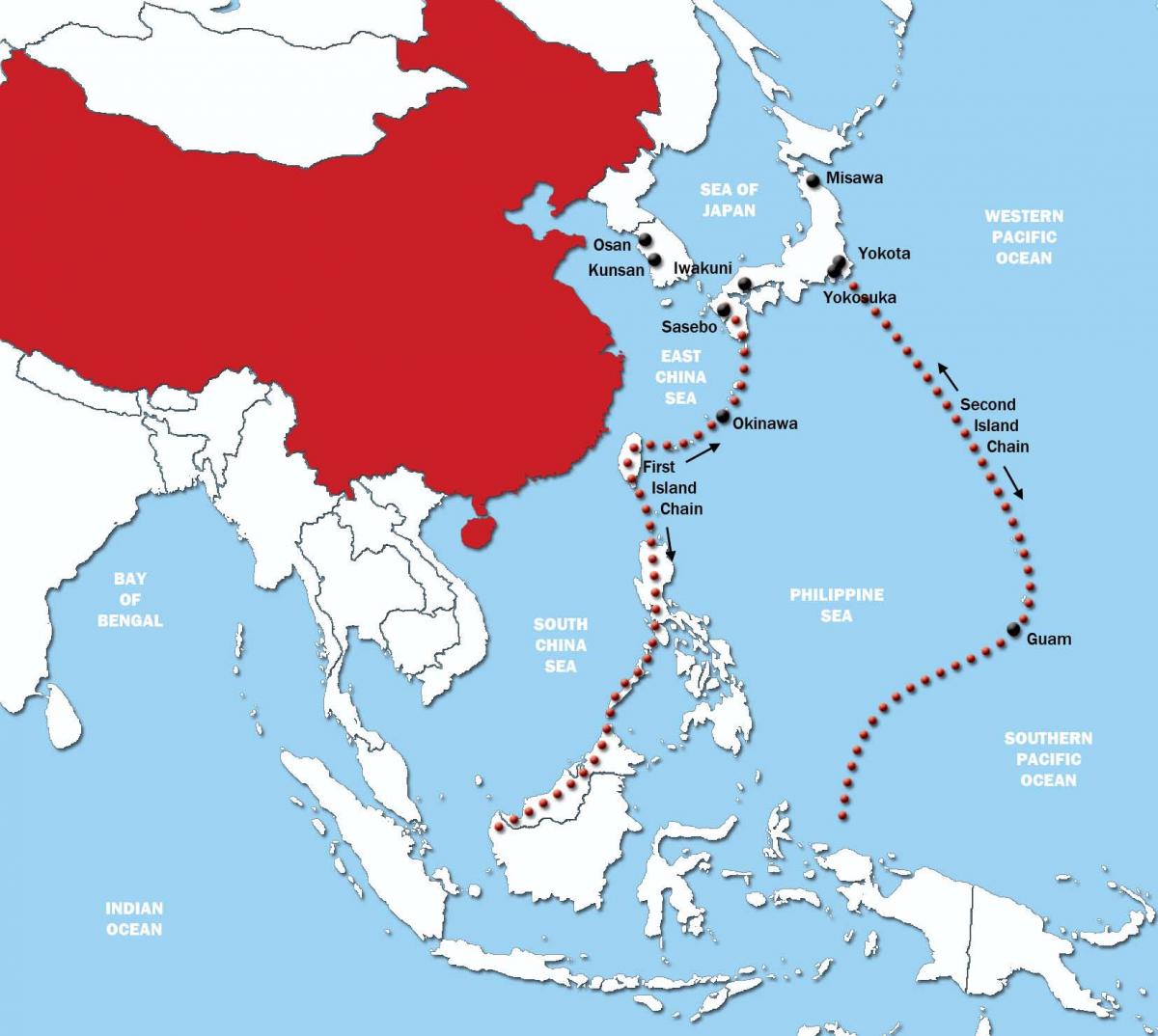 “The F-35 was built to penetrate the most guarded airspaces in the world and get the job done,” stated the Business Insider. And the National Interest advertised the F-35 as dominant over the most advanced jet in China’s inventory, the J-20 Stealth Fighter (although this may also be published to support the aim for higher budgets for Lockheed). A recent military exercise demonstrated an “increase in lethality and integrated amphibious capability,” according to commander Col. Robert Brodie of a marine expeditionary unit. Naval maritime capabilities are essential in “breaking the great walls” of countries like China.

Production of the F-35 is mainly a US affair. But also in Europe, work is done on the naval versions of the stealth fighter. Already in 2007 Lockheed stated that the F-35B “incorporates parts and systems from all nine F-35 participant countries — United States, Britain, Italy, the Netherlands, Turkey, Canada, Australia, Denmark and Norway) — including the wiring harness, produced by Stork Fokker-Elmo of the Netherlands.” The F-35B STOVL operation is for example made possible through the Rolls-Royce shaft-driven lift fan propulsion system and an engine that can swivel 90 degrees when in short takeoff/vertical landing mode is produced at the Bristol site of Rolls Royce.

Cameri in northern Italy “has the only F-35B production capability outside the United States. It will assemble the 60 Italian F-35A[6]s and 30 F-35Bs.” The first F-35B was handed to Italy in January 2018.

F-35 Program Executive Officer US Lt. Gen. Christopher Bogdan pointed to the fact that the arrestor hook – essential for landings at aircraft carriers – for the F-35 Navy version did not work. His office handed the redesign authority for the system over to Fokker and it delivered a version which worked. “GKN Fokker Landing Gear Business in Helmond has designed, developed and produced the F-35C’s arresting hook system, which was redesigned with additional stiffness and revised shaping,” the company proudly advertised at its website. In general work packages it encompass the three variants: A, B and C. (Fokker Helmond is now also producing the arrestor hooks for the Reaper drones.) 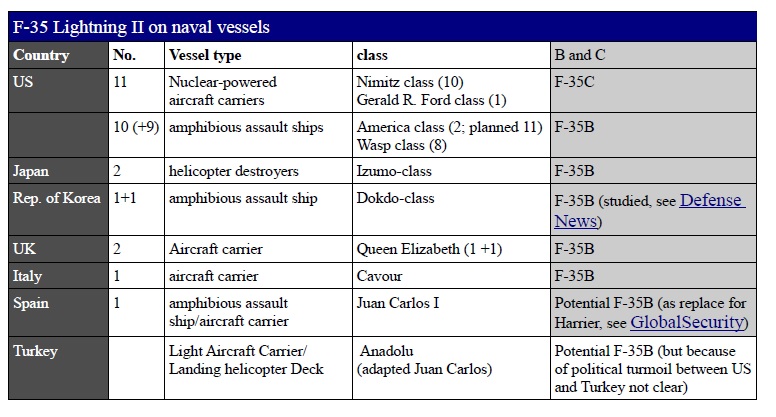