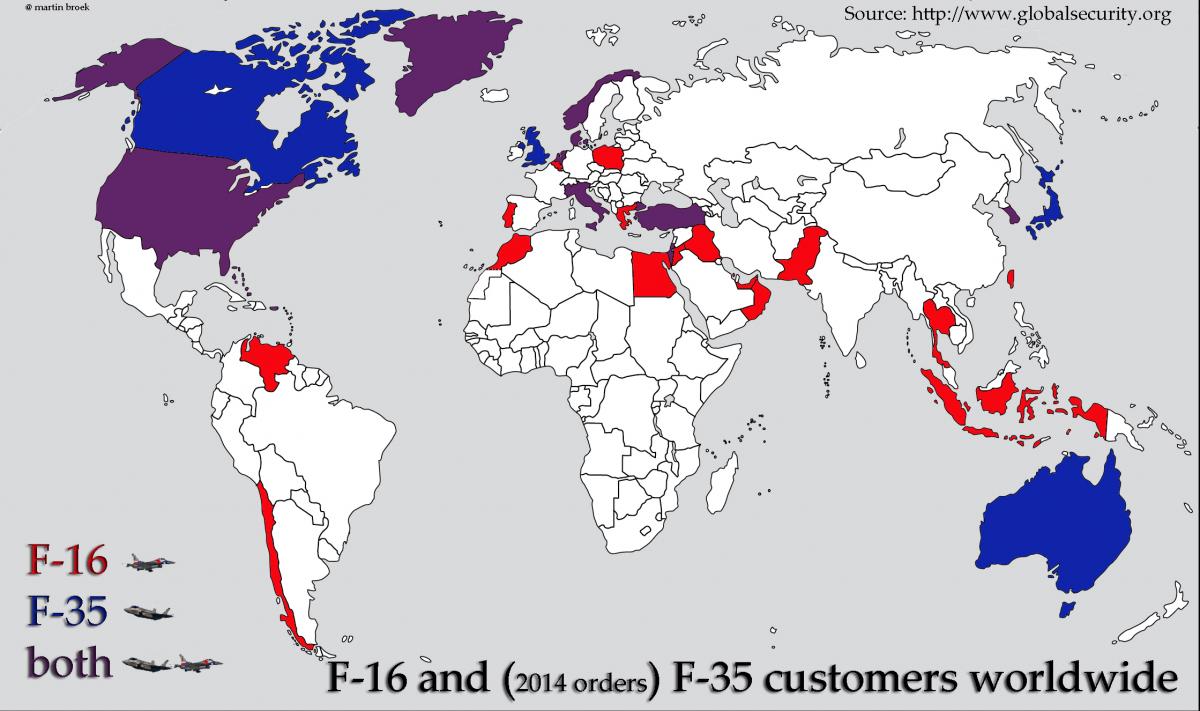 Fighter aircraft are among the most decisive weapon systems in combat available. The most expensive and best marketed is Lockheed Martin’s F-35 Lightning II, also known as Joint Strike Fighter.. On a recent South Korean tender for new fighter aircraft two giants in the world of aircraft, Boeing and Airbus, had to team to tackle the strong position of Lockheed.

Nine countries are officially participating in the F-35 program, all based in North America and Europe. They are grouped in levels. The UK is the only Level I country, Italy and the Netherlands are on Level II. Clients for the F-35 come from Asia and the Middle East, including the UAE and last but not least Israel. Here the heat comes around the corner. Because when countries join in F-35 production, the export policies of the US will be followed. European restrictions on exports (which are only a EU common position, not a law) will not be taken into account as is stated in a number of Memoranda of Understanding. This might go at the expense of human rights and European security.

There is no track record on the use of the F-35 fighter in combat missions, because it is not operational yet. But what can be expected can be deduced from looking at recent history of the F-35 predecessor, the F-16 Fighting Falcon. Also a multi-mission fighter aircraft produced by Lockheed Martin for export. This can also give an idea of which countries will become partner in this Fighter bond (see illustration). The latest partner which joined is Iraq, which has decided to buy the F-16 in 2018.

F-16’s have been used recently in international combat missions in Afghanistan, Iraq, Libya and Syria. But also in internal conflicts e.g. by the Pakistan air force against internal uprising and Taliban. The independent Pakistan Human Rights Commission report “indiscriminate bombing and strafing” by F-16s, according to an article in Le Monde Diplomatique in October 2006.

Turkey is a key country in the F-35 project, because it a level III partner, picked by the Pentagon as one of the heavy maintenance hubs in Europe. Turkey has been using all its fighter jet types over the years in internal conflict, included its F-16’s. In December 2007, Ankara deployed fifty F-16’s during one operation against Kurdish strongholds just across the border in Iraq. F-16’s have been used in similar smaller operations until as recent as October 2014. It is evident that fighter aircraft are not weapons to be ignored when speaking about human rights. This might bring European F-35 production partners in a painful position while they will not be allowed to act according to their own arms export and human rights policies .

This brings us at Israel, a country where European and American positions often differ. Israel is using its fighter planes regularly in combat operations against Palestine territories. Fighters have been firing missiles and have bombed several targets on the West Bank in 2001 and more recently, in Gaza. The Israeli peace organisation End the Occupation has collected examples from 2012, showing how bombs and missiles were used against homes, cars and refugee camps. During the summer of 2014, F-16’s have been used against Gaza. US Defense News describes in detail why and how: “Hundreds of the more than 6,000 targets struck from the air during Israel’s 50-day urban war in Gaza were from fighter jets delivering one-ton bombs in record time.” The planes provided close combat support, “with an F-16 dedicated to every brigade, precision air power provided “pillar of fire” protection for friendly forces fighting (…).”

Israel is not one of the nine F-35 program countries, but has ordered 19 F-35s under a $2.75 billion contract. The planes are expected to be delivered in 2016-2018. An additional procurement is limited to 13 JSF’s (against originally planned 31 ) estimated to cost $2.74 billion. Although Israel is not one of the ‘nine’, it is also participating in the production of the F-35. Israeli arms company Elbit Systems has been selected to join the production of the F-35’s helmet-mounted display systems together with Rockwell Collins from the US. This is cutting edge technology, giving the pilot e.g. situational awareness and cue weapons systems to the direction his head is pointing. Thales’ subsidiary Visionix’s officially complained that the used technology is a breach of a Visionix patent. The US however claims it has licence rights to the technology, because it has subsidised Visionix’ research. A helmet developed by British Aerospace has been cancelled in favour of the Elbit/Rockwell one.

Israel Aerospace Industries (IAI) delivered a Ehud Autonomous Air Combat Maneuvering Instrumentation system in December 2014 to the Italian air force. “The pod has become the standard in NATO, and with many air forces in Europe, Asia and Latin America.” IAI is adapting the system for installation on the F-35 to train its pilots.
Remarkable is the opening in September 2014 of a IAI-production line for F-35 wings. It expects to produce 811 pairs of wings in the next 20 years. “It will provide wings for the Israeli air force’s 50 F-35s, as well as for the U.S. Air Force and European customers, with the exception of Turkey,” stated Alon Ben David in Aviation Week & Space Technology (AW&ST, 19/11/14). The opening of the plant is considered “as evidence that bilateral ties [between the US and Israel] were bulletproof.”
Susan Ouzts, vice president of international programs at Lockheed Martin, said to Avition Week of November 19 that the total value of Israel’s contribution to the F-35 project will be $4 billion.

In 2013, Elbit Systems of America established itself at the Logistic Center Woensdrecht in The Netherlands. It will do European work on the F-16 and expectedly also on the F-35. At the same location Fokker Elmo – one of the Dutch companies delivering technology or services for the fighters – will be responsible for the engineering, manufacturing and production of the wiring for the next batch of the F-35. The company optimistically recons with “a total estimated production of more than 3,000 F-35 aircraft, this is a major opportunity for our company in the decades to come in terms of employment, knowledge and innovation.” This means the company expects to produce wings for all F-35 jets, included the Israeli ones. Recently the Dutch government announced that the Netherlands can overhaul the F-135 engine of the JSF at Woensdrecht. Both Dutch and Israeli defence companies will work closely on the the new fighter plane at Woensdrecht.

The consequences of the cooperation on the F-35 Lightning II programme, notably the undercutting of arms control policies, has hardly been discussed. When production partners have to follow US arms export policies policy it might come at the expense of the European vision on security and human rights.