Late august 2018 military helicopter company NHIndustries concluded a deal with Qatar to sell 28 helicopters. The France-based company is jointly owned by Airbus, Leonardo Helicopters and Fokker Aerostructures. Fokker produces the landing gear for the NH-90 helicopters. The deal with Qatar is only a tip of the iceberg of the involvement of the Fokker company in the Middle East. Fokker delivers parts for all kinds of aircraft used in the war on Yemen. Fokker is an almost forgotten part of the Dutch industry; that many of its planes are still flying is not commonly known

The history of Fokker dates back to the very beginning of aviation. And also military aviation. The company already delivered war planes to Germany during World War I. After its bankruptcy in 2005 the production of complete planes ended but Fokker did not disappear. Branches continued producing components for aircraft and missiles of Airbus, Leonardo, Raytheon, Boeing and Lockheed Martin.

For an outsider it is difficult to tell which components are part of which weapon system. Fokker has made agreements on production on many systems and those are sold to a number of countries (see table 3) most probably while including Dutch components.

Fokker is also still overhauling the planes that it has build in its glorious past. Planes have long lives and many Fokker planes are still part of military inventories, used for military tasks such as maritime patrol, cargo and personnel transport. They fly on all continents: from Angola to Venezuela, from tiny Togo to the United States. Active types involved are the F-27, F-28, F-50 (and the slightly longer F-60), F-70 and F-100 (see table 1). 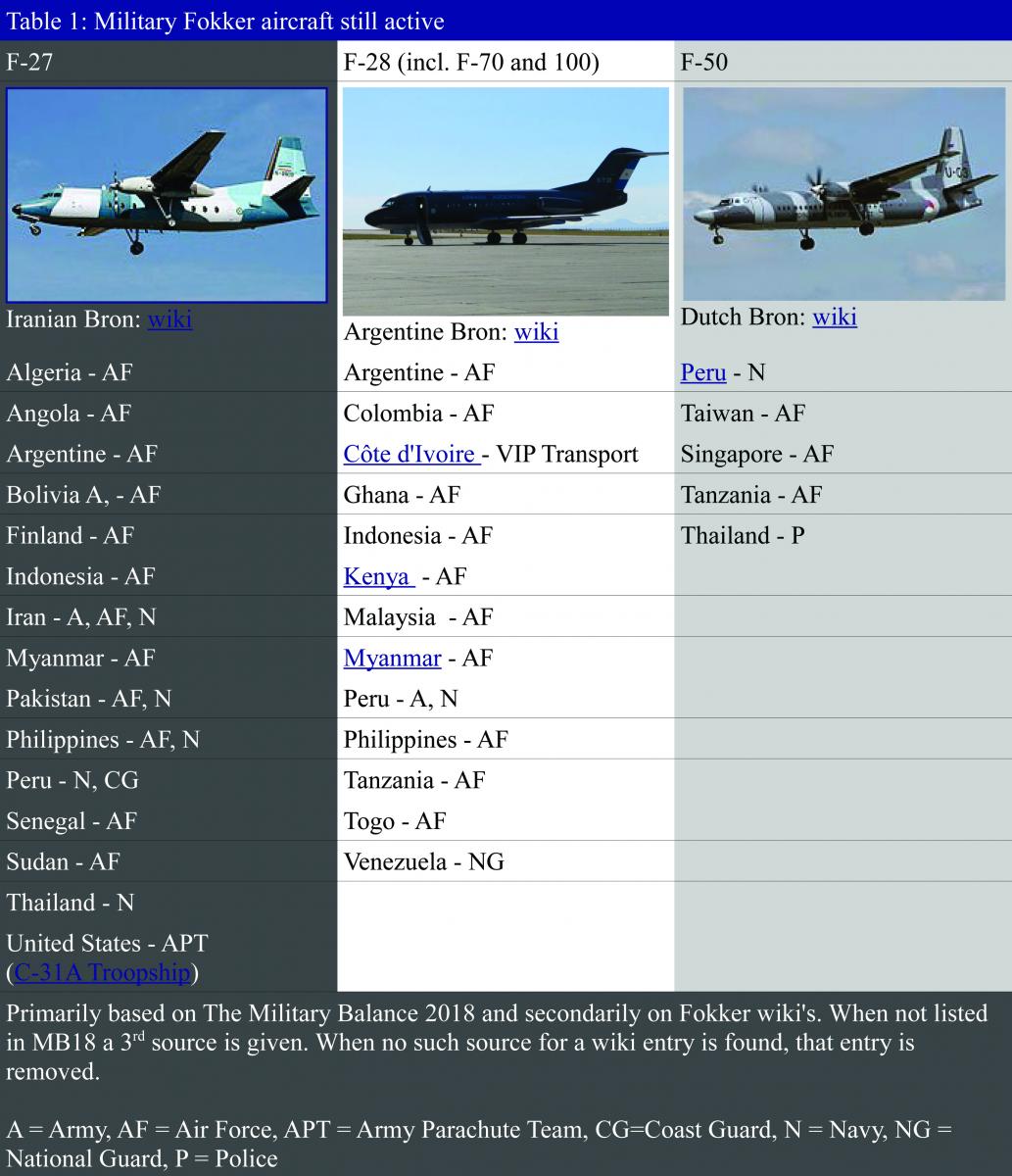 GKN Aeospace Fokker is composed of four divisions falling under Fokker Technologies: aerostructures, electrical wiring systems, landing gear and services. That last division plays a major role in the maintenance and repair of Fokker aircraft, but also of recent aircraft types such as the F-35. GKN even considers to make this part more important. Fokker Technologies is a major contributer to the overall rotary wing (helicopter) sector of GKN. 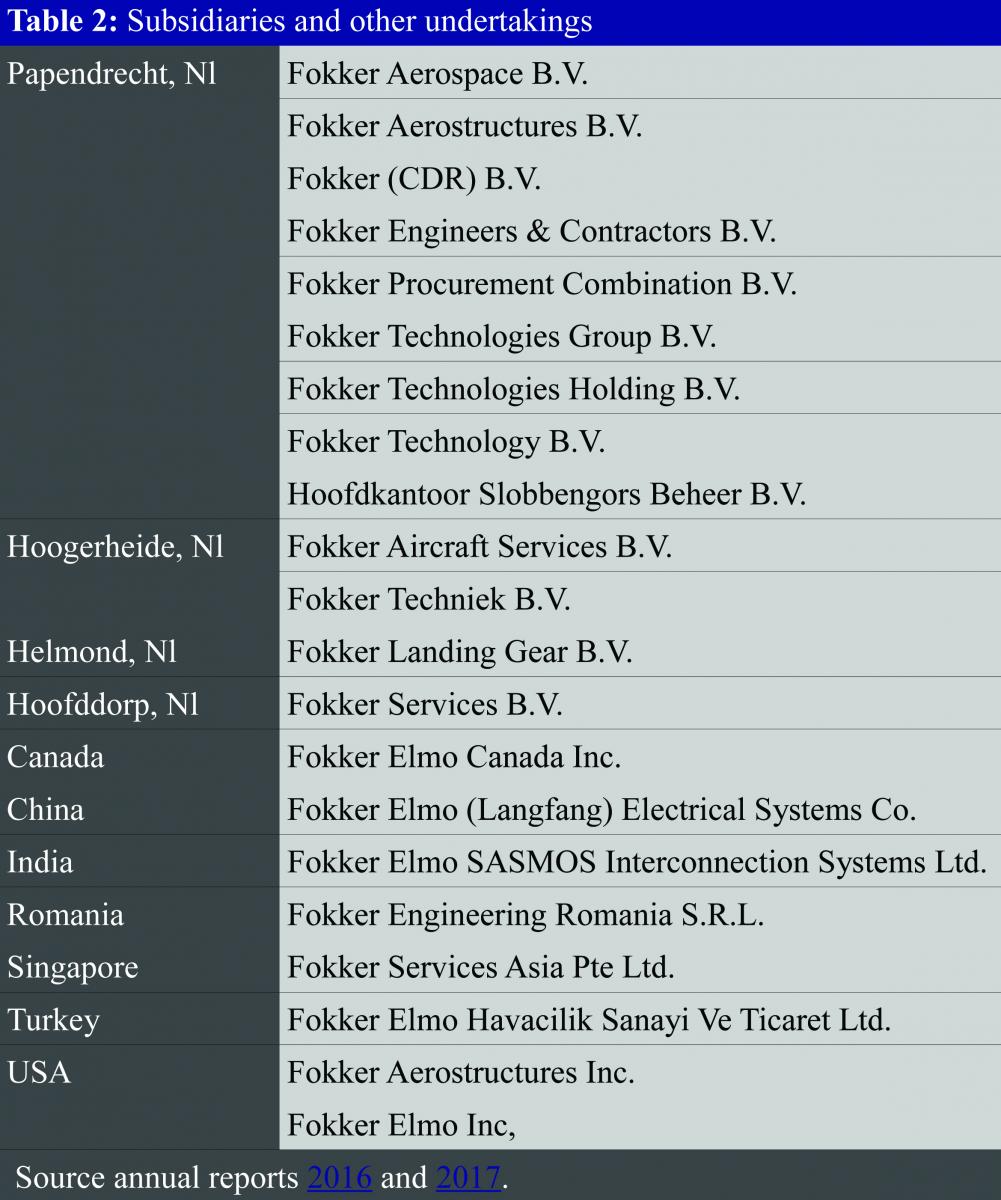 All different Fokker divisions produce components for a wide range of aircraft, such as fighters, helicopters and transport planes and even for PAC3 missiles (part of layered missile defence). For transport planes including the A400M, the C-130 Hercules (globally the most common military transport aircraft), and the Leonardo C-27J battlefield airlifter. Those planes are used for the deployment of troops and equipment all over the globe. But components are also produced for the Boeing 737 AEW&C, an airborne early warning and control aircraft designed for the Australian air force to oversee the battlefield. This aircraft is also sold to Turkey and South Korea, and offered to Italy and the UAE. The Boeing P-8 Poseidon is in use in several countries for patrolling sea lines of communication, illegal activities and migrant movements and – military the most important – searching for submarines. The P-8 is in 2017 offered to Saudi Arabia.

Fokker is widely involved in helicopter programs. This includes the previously mentioned NH-90 program, a helicopter in two different versions for tactical transport (of goods and/or troops) and for use on naval surface vessels of frigate size and bigger. The Dutch company also produces major sub-assemblies for the back of the double rotor Chinook helicopters. For the Apache attack helicopter (AH-64) it is producing the forward avionic bays (FAB’s), the vertical stabilizer and landing gear. GKN stated that: “This successful collaboration has continued with the operation involved in the latest Apache version: the AH-64D Block III.”

The Apache is not only found in inventories of the US forces and the armed forces of a number of Asian and European allies, but also in the Egyptian, Israeli, Kuwaiti, Qatar, UAE and Saudi (also Army and National Guard) Air Forces. The attack helicopters are operated in the military actions in Yemen under the cynical designation Restore Hope. The Saudi’s employ at least two and the Emirates seven of them in fighting operations, according to the Military Balance (2018 edition).

Resulting from offset agreements made during the last forty years Fokker is also involved in the production of F-16 parts. These planes are also used in the war on Yemen: Bahrain employs six, Egypt six, Jordan six, Morocco six, and the UAE each 12.

The latest addition to the Western fighter aircraft fleet, the F-35 Lightning (including its engine), is fitted with Fokker parts and more of this kind of complicity can be expected in conflicts not yet even known.

The Dutch government has the opinion that as long as exports of components take place in EU/NATO+ countries, the arms export controls will be done in the country of final assembling. Is this controllable? Yes it is if the the companies assembling the aeronautic weapon systems want to cooperate and Dutch government is willing to make this a condition. One of the demands in the production process among the involved businesses is that: “Full traceability of the Supply Chain shall be guaranteed either by AS/EN9120 certification or be proven by the paperwork with the goods.” This traceability could become the foundation for a more stringent arms export policy. It should. Why is the Dutch government strict on direct exports to Riyadh, but can Dutch components end up in weapon systems used by the Saudi’s and their allies in a bloody war? 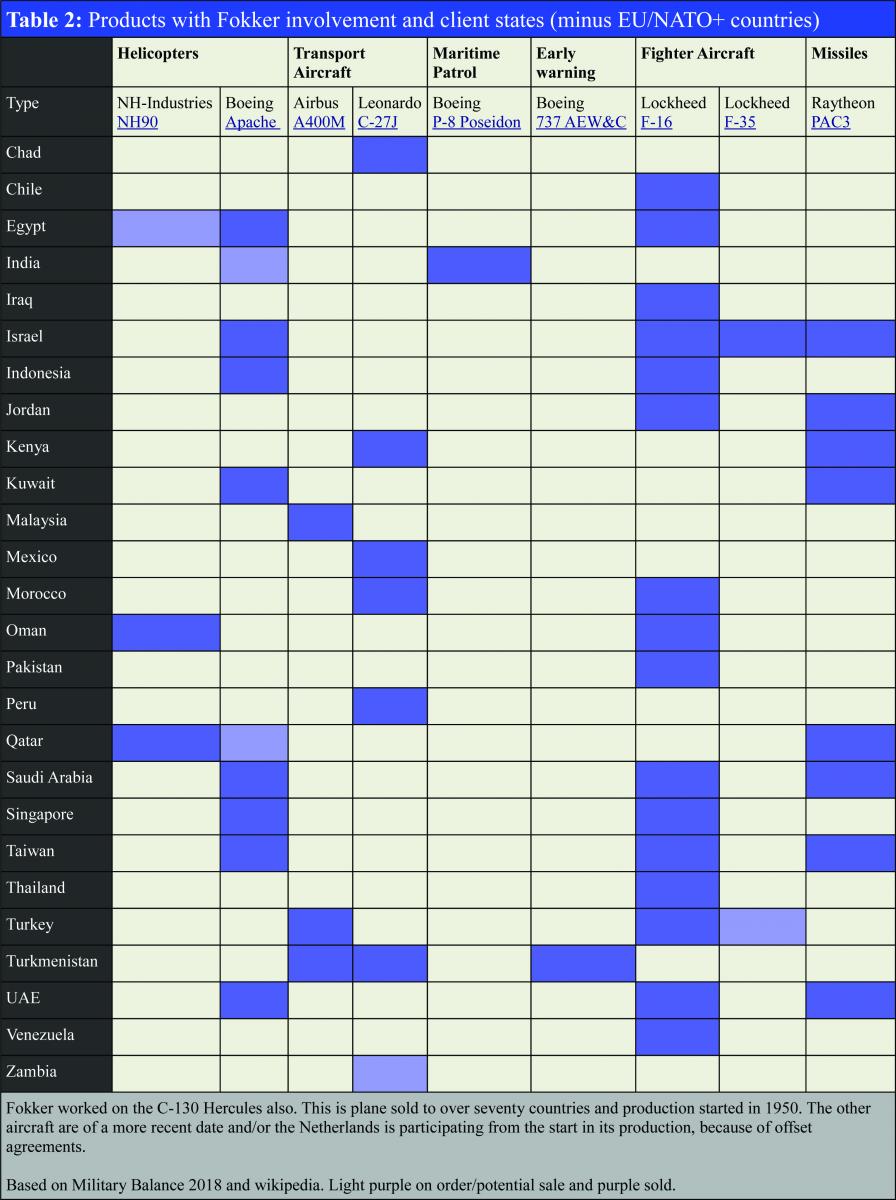