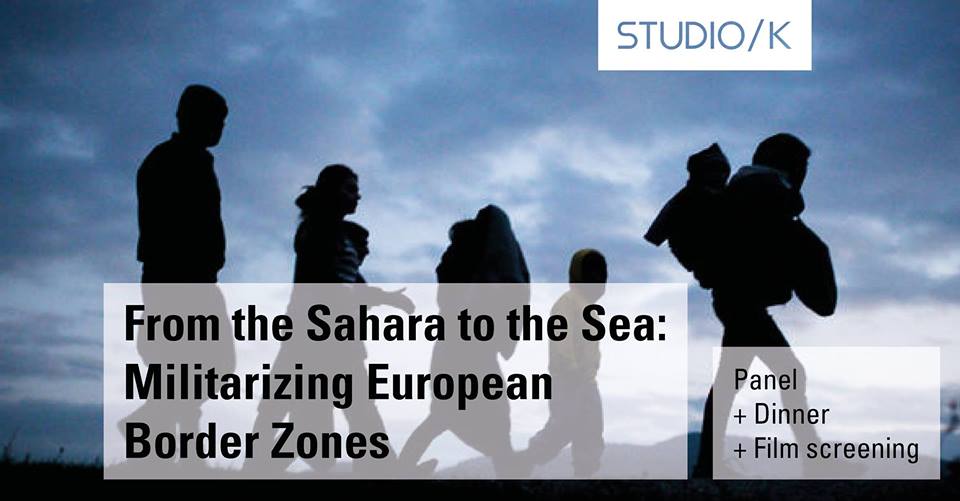 Film and Panel Sunday December 16 14:30H – 19:30H Studio/K Timorplein 62 Amsterdam – Since 1993, more than 27,000 people have drowned in the mediterranean sea trying to reach Europe. 6000 more died in detention centers, at the hands of militarised police forces and from deportations. These are staggering figures, yet they only represent those whose deaths have been documented.

Even more refugees, by some estimates twice as much as the drownings, have perished in the Saharan desert. A lesser known development in Europe’s efforts to curtail migration, European countries have partnered with 35 external countries to stop migrants in exchange from funds, weapons and other aid. Many of these regimes have been convicted of war-crimes and crimes against humanity, and now use their repressive powers to stop migrants from reaching Europe. Algeria, for example, deported over 14,000 refugees to the Saharan desert in 2017/2018 alone, leaving them to die anonymously in the sands.

The EU security industrial complex has become a multi-billion dollar business benefitting major corporations such as Thales and Airbus. While refugees were fleeing the Middle-East and North-Africa during the Arab spring, European arms manufacturers exported over 10 billion euros in material to the region, a process that has been expanding to this day. Clearly, European foreign policy has been at the heart of the migrant crisis. Therefore, Studio/K has invited researchers, journalists, refugees and activists to shed light on this pressing topic. What role does the European arms industry play in fuelling the very conflicts that refugees flee from? And what do these refugees face on the migrant trail? How can we stop the migrant-security-industrial complex? These are just some of the questions we’ll address this evening in Studio/K.

After the panel we will have a film screening in our cinema of Revenir, an award-winning documentary film made by David Fedele and Kumut Imesh, about the hardships faced on the migrant trail from West-Africa to Europe. The film is told through the eyes of a West-African refugee, Kumut Imesh. For more information and the trailer please visit their website: http://revenirfilm.com/

❂ Speakers:
– Christian Jakob, editor of the German newspaper Taz, co-ordinator at taz.MigrationControl and co-author of Dictators as bouncers of Europe: How the EU transfers its borders to Africa.
– Kumut Imesh, co-director and protagonist of the documentary film Revenir, founder and director of ACSORE (Actions of Solidarity for Refugees)
– David Fedele, award-winning director of the documentary films Revenir and The Land Between.
– Mark Akkerman, researcher for Stop Wapenhandel, author of ‘Expanding the Fortress’.
– Khalid Jone, former spokesperson of the self-organised refugee collective Wij Zijn Hier.
– Jean-Pierre, co-organizer at Stop the War on Migrants.

❂ Moderator:
Jaël in ‘t Veld, migration journalist at Oneworld.nl and board member of Amsterdam BIJ1.