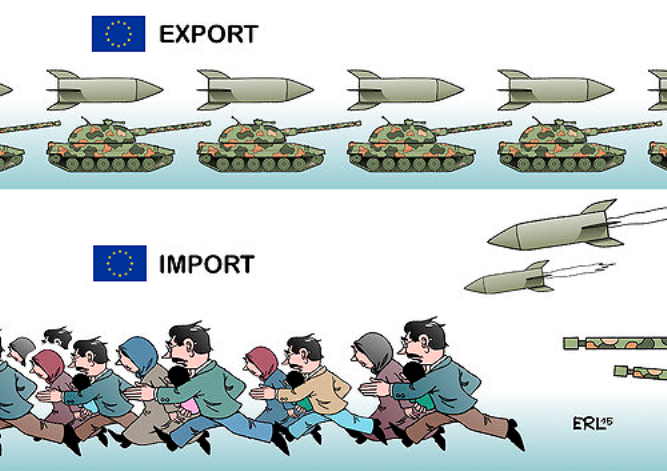 In 2015 global military spending has reached $1700 billion, which is good news for the arms industry. At the same time, 60 million people are made refugees as a consequence of conflict and violence. While arms companies are increasing their profits and shareholder value, weapons from Europe cause a lot of despair.
The Netherlands is the home base of arms producer Airbus, the 7th largest global arms producer and second of Europe. Recently Airbus Typhoon fighter jets are bombing targets in Syria and Iraq.

Airbus missiles are deployed in Afghanistan and Lybia. Airbus sells helicopters to Saudi-Arabia, a notourious human rights violator which is commiting war crimes in Yemen. Airbus subsidiary MBDA makes huge profits with export of missiles to Egypt and Qatar.

The region is overflooded with weapons and bombed from many sides, while at the same time refugees are stopped and send back by Europe. This is also profitable for the arms industry: Airbus has contracts with Rumania and Saudi-Arabia to build new border security systems.
More and more weapons are not making the world any safer and do not solve the refugee tragedy.
For tax reasons the official seat of Airbus is The Netherlands. The annual shareholders meeting of Airbus is taking place in Amsterdam. An opportunity to expose the role of arms trade as a cause of war. While Europe is sending back refugees it also continues to export arms. And make a profit out of this!
Help refugees, stop arms trade!
Come with banners and noise on Thursday April 28 to Ferdinand Bolstraat 333 and raise your voice against arms trade!