During a visit of the Dutch prime minister to Washington, the Netherlands and the United States reinforced their ties on military affairs on issues like cooperation on operations, equipment and acquisitions. The US is already the biggest customer of the Dutch arms industry, followed by EU/NATO+ and Germany. Cooperation agreements play a large role in this trade connection.

Great global powers are building all types of arms and complete systems at home. Regional powers and smaller industrialized countries such as the Netherlands have limited capacity to build domestically. Typically they produce subsystems and components. The Netherlands has a strongly developed policy to negotiate industrial orders in return when acquiring major weapons abroad. It is part of the Dutch Defence Industrial Strategy (DIS). In the past this was called offset or compensation policy. Today it is called industrial participation. The European Commission is objecting this Dutch policy as it hinders the free EU arms market they pursue.

Although the biggest Dutch arms export licenses of 2017 are connected to the sale of naval vessels to Mexico and Pakistan, the eight largest licenses for parts have a value of € 200 million (see table 1). The description of almost half of the approximately 1.300 licenses in the Dutch 2017 reports on individual export licenses of military goods

start with the words part or parts. Often the value of an individual license is not so high, but all licenses together amount to over a billion euro. Components are a considerable part of Dutch arms exports. 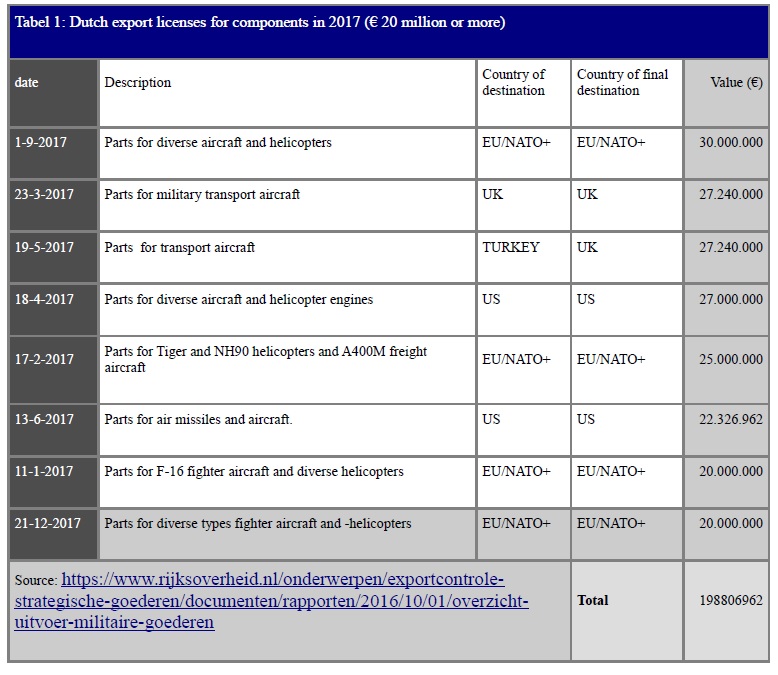 Of those licenses, many are for naval systems produced by Thales Netherlands. In 2017 alone, the list of destinations receiving Thales radar or command and control equipment includes Algeria, Argentine, Bahrain, Bangladesh, Brunei, Canada, Colombia, Egypt, France, India, Indonesia, Japan, Malaysia, Oman, Pakistan, Poland, Qatar, Singapore, South Korea, Taiwan, Thailand, Turkey, Turkmenistan, UAE and US. The sales to Egypt were discussed in a courtroom in 2016-2017, because Egypt is using naval vessels to blockade Yemen. But according to the minister of Foreign Affairs Stef Blok during a debate in the Dutch Parliament, the vessels are not only used for that but also for the security of the Egyptian State.

There are two major transparency issues with components. One is that many sales are reported in an unclear way. Exported parts can be for aircraft and helicopters, transport planes, engines for helicopters and planes, tanks, armoured vehicles, for missiles and even for aircraft carrier tailhooks (see table Dutch produced arms exports of components/parts (2017). It is hard to get an real overview. The level of information on the exports runs from non-information like ‘global license’, to the the very general ‘parts for aircraft’, or ‘parts for fighter aircraft’. Information only makes sense when more specific. ‘Parts for aircraft’ could as well be for Eurofighters sold to Saudi Arabia and used to bomb Yemen. Search radar is something different than radar for fire control. A small patrol vessels without weapon mountings is another kind of export than a patrol vessel with automatic guns.

The second issue is the lack of detail on destination. EU/NATO+ is only superficially a homogeneous category. It includes countries as different as the UK, Poland, Turkey, Japan, and the US. Even inside Belgium there is controversy between Flanders and Wallonia on what is an acceptable export destination. European arms export policy is based on a Common Position, but also based on interests and interpretations rooting in centuries of sovereign foreign, economic and defence policies. NATO+ countries which are outside the EU have even more room to follow policies to their own liking and interests. 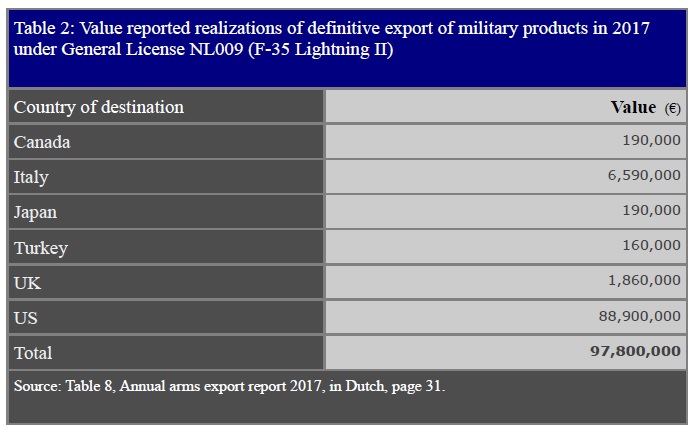 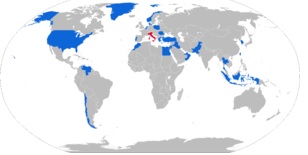 Map with F-16 operators in blue with former operators in red. Wikipedia. Slovakia in July 2018 the latest new customer not yet included.

For arms component control the devil is in the detail. A non-Dutch company assembling Dutch military components into a bigger weapon system may export to destinations which are controversial for the Netherlands. For example: F-16’s with Dutch components have been sold to countries on all continents (see wiki map). Some of them notorious human rights violators. Others involved in conflicts. For the US however, arms export policy is American foreign policy and – under president Trump more than ever – driven by American economic interests. The same will become true for F-35 components exports. Dutch parts will be hardy be recognised or even invisible below the stealth body. The Dutch government provides an overview of countries receiving F-35 components under a General License (see table 2), but it is not clear who the end user will be.

Licensed exports of components runs from parts for fighter and transport aircraft, attack and naval helicopters, aircraft engines, to vehicles, simulation and optical equipment. Components of drones go to the US and India. Components for Airbus A400M transport planes are sold to Turkey (see table 3). Ankara also buys parts for the T-625 transport helicopter produced by Turkish Aerospace Industries (TAI). Transport planes and heli’s are used to fly troops and equipment where needed; considering the conflict with the Kurds the Dutch government would never allow the export of complete systems. For Turkey this air transport capacity is critical for internal and foreign military deployment.

The Netherlands exports parts for Typhoon fighters (also named EFA/Eurofighter). The Eurofighter is assembled by companies in four different countries and exported to the Gulf region, included Riyadh. The Saudi’s are also buying Sea Sparrow missiles (in the Dutch licenses also listed as ESSM or anti-air missiles). It is impossible to distill this from the Dutch arms export records, because all ESSM exports are going to the US. But we know they do not stay there.

The reason for the temporarily import of Hawk trainer aircraft parts from the United Arab Emirates to the Netherlands and back again to the Emirates, reported in the 2017 overview, is unclear. It is not a major deal (4 x € 54.000), but the Gulf states depend on trainers for their air operations against Yemen, according to Defense News of February 2018. The producer of the Hawk trainer, British Aerospace Systems (BAES) established a repair and overhaul facility in the UAE in 2017. But even if the advanced trainers are not directly involved in the conflict, the planes are used to train the fighter pilots creating suffering and havoc for the people of Yemen.

It is not the size of the individual licenses for components (although some have a large value), but the enormity which makes the issue of components important. The export mainly follows negotiations during the acquisition of large systems which guarantees a Dutch role in the production of major weapon systems. Reporting of component export should at least provide insight in for what specific weapons systems the components are sold. Reporting should not mention naval vessels, but SIGMA 10514; not C3, but fire control radar, not aircraft but C-130 or F-16, not missile but ESSM etc. Moreover, the Netherlands should not only negotiate sales, but also public access to information on the final destination of major weapon systems with Dutch components. It makes a huge difference if this destination is Belgium or Bahrain.