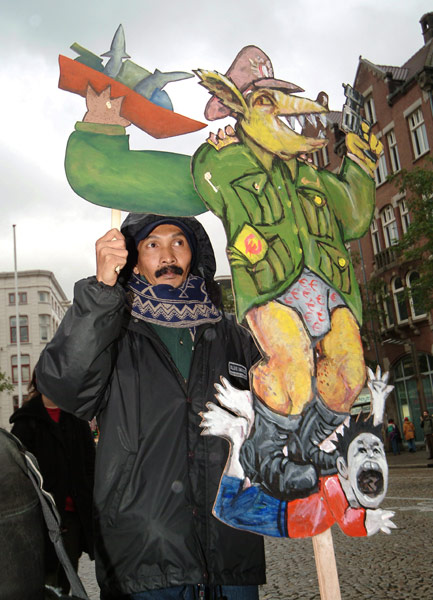 In November 2003 it became public the Dutch shipbuilder Royal Schelde in Flushing is preparing to export four major naval ships to Indonesia. The sale was defended by arguments the ships are use full for coast guard tasks (like preventing: illegal smuggling, violations of fishery grounds, piracy etc.) and combating terrorism. This although the shipbuilder itself is referring to the ships as Ocean Combat Ships and that the weaponry is enormous for those tasks (included missiles against air and surface targets, torpeo’s and a middle class (76 mm) cannon) and a very big hull size of 1900 tons, which places it among the biggest vessels of the the Indonesian navy. The Asian Defence Journal states: “The government recently announced plans for naval build-up as an important priority, clearly in reposnse to the growing unrest in various parts of the archipelago.”(1)

Those well armed and big vessels have a price tag. In the running up to signing contracts the Dutch government said a financial arrangement is considered essential to proceed with the deal. Despite protests in the Indonesian parliament against the buy of the ships, because of financial reasons, the financial arrangement is concluded. This involves two Dutch banks: the ING and Rabobank, those banks gave an export credit assurance to Jakarta worth – 500 million for the first two ships.(2) The financial amount makes this deal one of the biggest in Dutch history. In the back the two private banks are supported by Atradius DSB (Dutch State Business) – doing the export credit agency work for the Dutch ministry of Finance. This financial arrangement makes it possible Indonesia buy now and pay later, or in other words is building up a higher Indonesian foreign debt.

There are several reasons to oppose the deal. Similar naval vessels have been used to support military operations, such as fire support for landing troops during the war in Aceh.(3) Another argument is the cost of the ships. This argument has become more pressing since the enormous tsunami disaster hit Sumatra. The cost of the Tsunami lead to the cancellation of an $890 million jet fighter deal with Russia because the money to pay for the aircarft has been diverted to the tsunami relief effort.(4)

The Campaign Against Arms Trade (CAAT) stated recently: “Despite the devastation in Aceh caused by the tsunami, the UK has refused to write off Indonesia’s arms-related debt. At the end of November last year Indonesia still owed ECGD £551 million for arms sales, having defaulted in 1998. (…) Indonesia, where 52% of the population live on $2 or less per day (latest UN figures show), desperately needs funds for humanitarian relief and reconstruction in Aceh.”(5)

Indonesian organisations of peasants, fisher peoples, victims of the earthquake and tsunami of 26 December 2004 stated: “(…) some of the international and multilateral institutions, governed by a largely neoliberal perspective, have pledged aid to tsunami-hit countries in the form of loans with conditionalities attached. This tendency only exposes how the tsunami catastrophe is being exploited by such institutions to pave the way for debt dependency in the affected countries and development policies dictated by these very same institutions, and not generated by the people from the grassroots and their organizations.”(6) Exploited may be to strong in this case, but the payment for those ships by the Indonesian government is exactly causing what those groups want to prevent, making Indonesia’s debt higher. In the Club the Paris the Netherlands agreed to suspend paying foreign debt by Indonesia for two months, but at the same time proceeds with adding to the archipelago’s foreign debt.

Besides the arguments on human rights and internal security it is now not the time to add to the foreign debt of Indonesia by selling the country new and expensive warships. The Dutch government said that the deal may proceed if the circumstances are not changing (rebus sic stantibus, in official language). They clearly have changed since the horrible day of December, the 26th. However the Minister of Foreign Affairs recently stated that the tsunami has no effect on the decission to deliver the ships, because they can be used against piracy and the effects of the tsunami on Indonesia’s GDP are rather small, 0.2%.(7) It is however rather cynical to get euro 145 million from the Dutch public for support to the victims of the sunami disaster and earn money by selling weapons on the other hand.