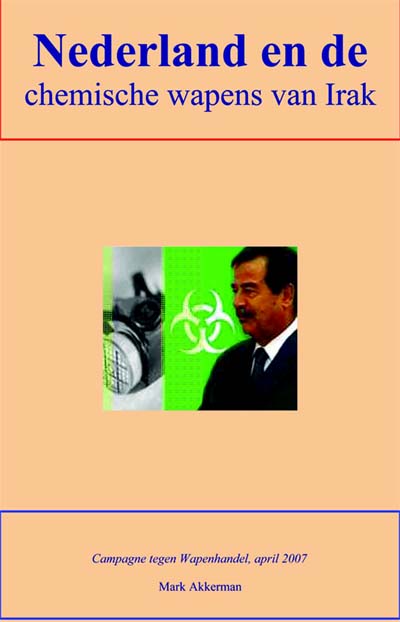 Amsterdam/Groningen, 9 May 2007: A report, released today by “Campagne tegen Wapenhandel” (the Dutch Campaign against Arms Trade) casts new light on the role of the Netherlands in the nineteen eighties with regards to Iraq’s chemical weapons programme. Studies show that the government deliberately did very little to prevent Dutch companies from supplying Iraq with precursors for the production of chemical weapons. The case of Frans van Anraat, in which the appeals court will pronounce its sentence today, therefore fits into a broader picture.

Especially the then KBS Holland and Melchemie delivered large amounts of chemicals to Iraq in the nineteen eighties. Both before and after the laboriously established export restrictions, Dutch companies were able to deliver precursor chemicals to Iraq.

The companies felt morally supported by the Ministry of Economic Affairs, for whom the economic interests prevailed. Foreign Trade minister Bolkestein, in particular, has a disconcerting role in this matter.

Shortly after the start of the war between Iraq and Iran, already the first reports on Iraq’s use of poison gas came in and the government in The Hague was aware of this. Yet the Dutch government made no attempts to prevent Dutch companies from getting involved in Iraq’s chemical weapons programme.

Only when the United States, in 1984, confronted the Netherlands with the large Dutch orders coming from Iraq, the Ministry of Foreign Affairs started acting. At the intercession of the late Dr. Ooms, a list of initially 21 chemicals, on which export authorisation was to be applied, was then composed. Under great pressure of Bolkestein, this list was reduced to only eleven chemicals.

“Campagne tegen Wapenhandel” thinks that the juridical case against Van Anraat should result in a large-scale independent investigation in the government’s and business community’s involvement in the export of chemicals to Iraq in the nineteen eighties.

The report “The Netherlands and the chemical weapons of Iraq” (Dutch version) and its summary (Dutch and English versions) are available on: www.stopwapenhandel.org.