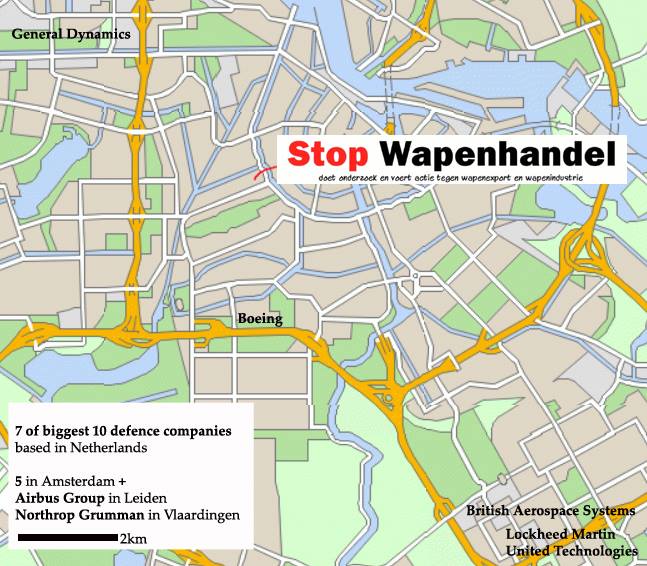 A few kilometres from the office of Stop Wapenhandel in Amsterdam, many arms companies have financial holdings, part of the financial structures of the world’s largest arms sellers. These holdings are using the advantages the Dutch tax system offers on three main issues:

* a participation exemption, which exempts dividends and capital gains from subsidiary companies abroad

* an advance ruling system on income taxation for entities offering 5 million or more to the Dutch economy.

All these tax evasion possibilities continue to have the full support of the Dutch government, according to the Secretary of Finance in a letter to the parliament October 2015.

The Netherlands is notorious for its tax evasion possibilities. This makes it attractive for a large number of arms companies. Seven out of the ten biggest global arms companies have tax constructions in the Netherlands. Those top-10 defence companies are using Dutch trusts to organise their Dutch holdings. Lockheed Martin and United Technologies use the Nationale Trust Maatschappij N.V. Boeing seems to have its own employee at the Amsterdam business quarter Zuidas. BAES uses SGG Management. General Dynamics uses Orangefield (Netherlands) B.V.

Stop Wapenhandel checked all of the top-100 global arms companies against Chamber of Commerce information and found large numbers of arms producing companies registered, often with little or no personnel. 31 arms companies have one or more holding structures in the Netherlands. That is one-third of all arms companies. In value of production they represent US$ 215 billion of the 450 billion globally earned with arms production. So of every two dollars earned with weapon production, one is having the Netherlands backing up its financial structures.

Arms companies profit in all possible ways from public money but contribute as little as possible.

The report Tax evasion and weapon production: Letterbox arms companies in the Netherlands can be found at www.stopwapenhandel.org