The most recent annual report, of July 2016, includes a page on export denials. These are arms export permit requests which are refused by the Dutch government. Remarkable is that eight out of thirteen blocked deals were for destinations on the Arabian peninsular; the UAE, Qatar and Saudi Arabia. All except one are based on criterion 2 of the EU Common Position on arms export; the respect of human rights in the country of final destination as well as respect by that country for international humanitarian law. One denial is motivated by criterion 4; the preservation of regional peace, security and stability. The publication of these denials is detailed and informative (see table 3 at the end of this blog).

Beside the publication of an annual arms export report, the government publishes other information enhancing the insight in Dutch arms trade, an overview is provided in table 1. The different forms of reporting are described, explained or commented below.

Around the same time that arms export figures were leaked, campaigners brought forward the Swedish example of government reporting on arms exports which was advanced at the time. Another step followed after a Freedom of Information Act request by Stop Wapenhandel and VPROs radio programme Argos asking for all governmental papers concerning arms trade. This request was answered with abundant information on individual military licenses in the nineties, although without names of specific types and companies. This was much more information that even Members of Parliament ever received. As a response, parliamentarians demanded the same level of information. All this undoubtedly helped to convince the government that transparency on arms export was no threat to trade. Space also existed because of greater openness after the Cold War. In 2004, a first report with individual licenses per month was published, giving a description, type of license, country of origin and end use and value. The format of monthly reports is by now also used for dual use and arms transit, all to be found on the website of the Dutch government and Stop Wapenhandel. It is the most informative – very factual – part of the transparency on Dutch arms exports. Lacking is information on type of end user (police, armed forces, industry) and the kind of license (individual, global or general) Both types of information could be easily included. An important – from political point of view – continuing omission is that publication is always long overdue.

Currently the Government is required to report several times on arms exports every year. The largest and most elaborate publication is the previously mentioned annual report on Dutch arms exports. This year for the first time since 2011 the annual report will also be published in English, which can help to work towards European harmonisation of arms export policy, an explicit wish of the Dutch government. The annual report is always commented by Stop Wapenhandel in an extensive critical analysis (coming forward later this year).

The report contains information on a) the defence and security industry, b) instruments and policy, c) the principles of the Dutch arms trade policy, d) transparency and e) the exports in the year it describes, EU-cooperation, information on the Wassenaar agreement, export control and dual-use and arms control. Those general chapters are largely copy and paste every year with minimal changes. Although this year the result of a new survey on the Dutch defence industry is included, giving the latest figures (see table 2)

The second half of the report is the most interesting, because it gives the amount, type and destination of Dutch exports and transit of military goods (and on dual use and transit in the previous calender year). This information is given in two different kind of tables: on country of destination and on category of weapon system. Both sorts of information are given in two half year tables and one on the full year, this because the Parliament is supposed to be informed every six months (which did not happen since 2012 however). It also gives an overview of Parliamentary documents on arms trade control.

The Dutch government itself is a major arms exporter; a four column table on the contracts of surplus arms is included in the annual report (type of materiel, sent to, country of end use, end user). This table is also detailed and provides valuable information. In the report on 2015 this table was 30 entries long and the contracts had a total value of ca. € 20.5 million, 2.5 percent of the total. That is low compared to previous years. In 2014 it was 20 percent of all exports and in 2013 12 percent. Fluctuations are big, but Dutch surplus arms exports are important to monitor and often subject to debate. Dutch surplus armoured vehicles were seen during the quelling of uprisings in Egypt and Bahrain in 2011, and Dutch surplus arms have been used in the war on Yemen. Destinations for superfluous Dutch arms raised several debates in the parliament, e.g. on tanks to Indonesia and trucks to Sudan.

Written information on surplus arms, two weeks before an export license, was provided to parliament to enable it to better control the government in its double role of merchant and arms export controlling authority at the same time. The initiative for this came from Theo van den Doel (VVD) in 1997. The information was confidential although sporadically leaked like when in July 2007 a sale was made public of several types of military vehicles to Chile. With an export of frigates to Belgium something went wrong; the parliament was informed during a debate and not, as was intended, with a letter. In this debate the government explained its policy on confidentiality. Surplus sales could be made public only when there was not a financial reason or request by the client to keep them secret. It seems both criteria are never met, because a public letter on the export of surplus arms under € 2 million is never published since 2007. A curious situation: only the parliament is informed on small deals and parliament and public are both informed on large deals due to the rule that deals above € 2 million are public. Unknown however is if the parliament is really informed on all smaller surplus deals.

Noteworthy is a list of fast track notifications on export licenses larger than € 2,000,000. This part of the transparency policy has been introduced after three years of debates. In December 2009 Van Dam (PvdA) and Van Velzen (SP) tabled a motion to urge for a policy of transparency by publishing all planned arms exports of a value of more than one million euros three weeks in advance of a export permit decision. The majority voted against and the motion was rejected. During the arms trade debate of 2011, the Secretary of Economics, Bleker, proposed to inform the Parliament (confidentially if considered necessary) on definitive export permits for complete systems bigger than € 5 million for non EU or NATO+ destinations, two weeks after permit. Some parliamentarians considered the five million threshold as too high and amended in December 2011 by a motion to lower it to € 2 million under the same conditions. This was accepted. The resulting letters give information on the type of weapon, the country of destination and the criteria the government had considered before coming to conclusion. In 2015 the Parliament was informed in five and 2016 until now in one case. Two of the 2015 reporting letters were on exports to Jordan. This raises questions about criterion 2, as Jordan is part of the coalition waging war in Yemen (see previous blog) which was reason for many other denials in the same year.

Despite the enormous growth of government transparency not all information, even on major exports, is yet know. For larger deals of components other sources are still needed to understand Dutch arms export policy. What is exported to Venezuela in 2015 valued € 20 million? According to the SIPRI arms supplies data base the deliverances to Venezuela might be fire control and search radar for large patrol vessels or even technology or knowledge to built the ships itself. But to be sure, government information is needed.

Improvements can be made with the reintroduction of an English language annual report and restart of the publication of half year reports; the introduction of type of end user and the kind of license in the monthly reports; and clarification if the MPs are informed on surplus deals and why this happens always in secret. 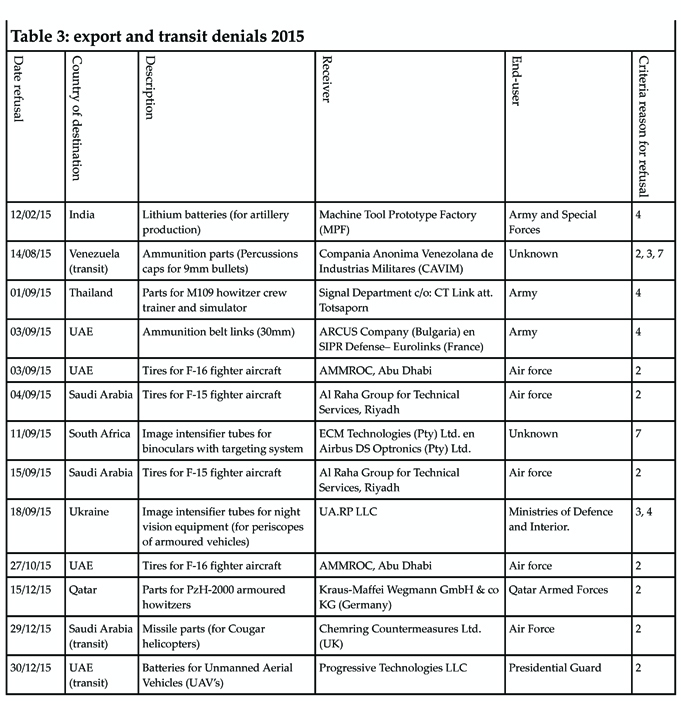