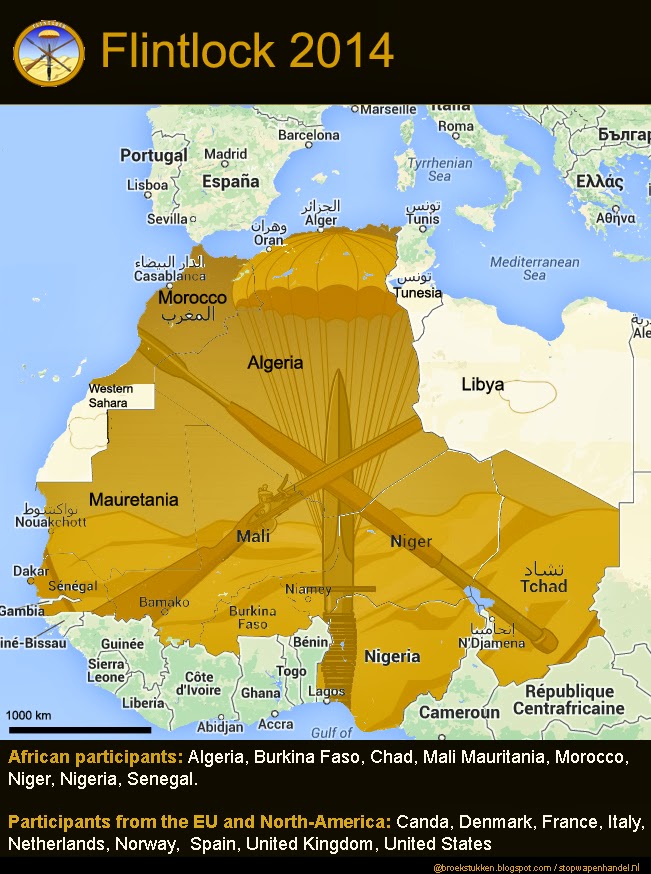 In recent weeks, the U.S. Africa Command annual regional exercise and operation Flintlock took place. Thousand of soldiers from eighteen countries cooperated in this international event for Special Forces. This year the aim of the exercise was to strengthen the position of the participating countries in two North African regions : the southern border region of Libya and the border region of Nigeria. Both are important for arms trafficking and in both areas Islamic terrorists are operating. Of the eighteen participating countries, nine were from West Africa (see map) and nine from Western Europe and North America.

The African participants were Algeria, Burkina Faso, Chad, Mali, Mauritania, Morocco, Niger, Nigeria and Senegal. Several of these countries struggle with internal conflicts. In Mali, Dutch troops will participate in the UN peacekeeping force MINUSMA (United Nations Multidimensional Integrated Stabilization Mission in Mali) to collect intelligence. In Senegal, Special Forces are fighting already for decades against an independence uprising in the southern province Casamance. According to Dutch defence bi-weekly Defensiekrant, the Dutch and the Senegalese troops are special partners during Flintlock. Another participant, Nigeria, which often leads African Union peacekeeping missions, has a military with a domestic problem with human rights, to put it mildly.

Flintlock has implications for the arms market. Military cooperation increases the ability to sell arms. While you exercise, you acquaint with the military leadership and developed contacts that pave the way for commercial contacts. Because of the common struggle against the jihadists, even the poorest countries of North Africa have become arms markets for the West. The purchase by Mauritania, one of the poorest countries in the world, of an undisclosed number of Augusta/Westland helicopters, may serve as an example .

The main buyer of Dutch weapons in North Africa, Morocco is also participating in Flintlock. Morocco takes a fifth position in a ranking of customers for Dutch weapons, with over half a billion euro of military sales to Rabat over the last ten years. Only at position 37 is the second North African country, Algeria. In 2013, this country bought arms valued 34 million euro’s.

West Africa is not the only remarkable training area for the Dutch military. According to an overview recently sent to the Parliament by Minister of Defence Hennis, Dutch troops also find partners for exercises, education and training in e.g. Gabon and Peru (jungle training opportunities) and in Jordan and Israel (training facilities for Special Forces).