NATO budgets for arms acquisitions are growing. In the NATO report on 2015 the military treaty organisation states that in 2014, 17.4% of NATO members budgets were used for acquisitions. In 2015 this was 2 percent more, namely 19.7%. Jane’s Defence Weekly (Feb. 3, 2016, p. 12) writes that 23 of the 28 allies have increased their spending on new equipment.

As NATO still counts for over half of world’s military expenditures, this is wonderful news for the defence industry. In absolute figures the 2 percent increase means that almost US$ 18 billion is added to the materiel budgets. To give an idea of the size of this figure: this is comparable with the combined budgets of the fourteen highest ranking arms importers of 2014. 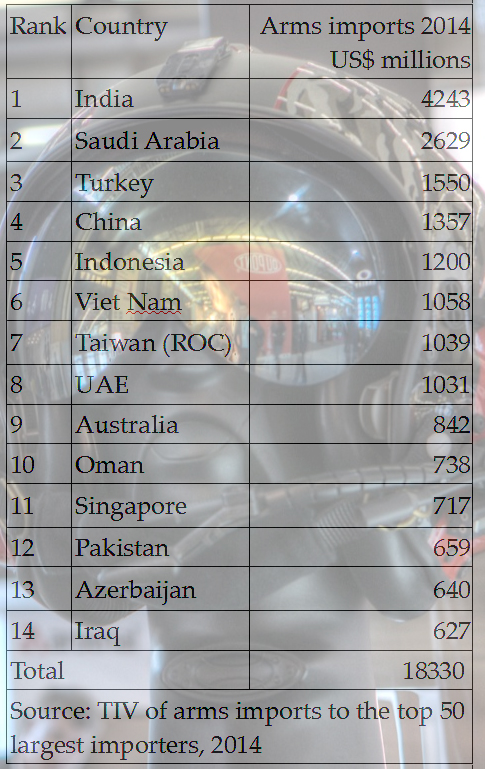 This rewarding development – for the arms industry, that is – stems from the perception that the world is becoming more dangerous. Successive NATO Secretary Generals have had one line which they repeated over and over: The members need to spent more on defence. Often this was and is accompanied by the mentioning of a wide variation of threats, such as ISIS, Russia, China, Taliban, terrorism, nuclear, migrants, climate refugees, cyber attacks, and also the traditional complaint about free riding on US-expenses. That NATO is already responsible for over 50% of of all the global military expenses (US alone is responsible for 35%) is hardly ever mentioned. Russia, considered a major threat, is responsible for only 4.5% of global miliary spending. The lion share of arms purchases is already on the burden of Western tax payers, but the constantly repeated message that the world has become a dangerous place is at last paying off. A large number of NATO members have increased their military budgets, especially for acquisitions.

AntiWar.com, an American website with information on and against wars, published an article by Thomas F. Lee. Lee writes on the positions of the candidates for the US presidential elections. All candidates state that the world is in a dangerous situation. “America must lead in a dangerous world,” solemnly says Hillary Clinton. Relieving us of naïve optimism, Bernie Sanders warns: “We live in a difficult and dangerous world, and there are no easy or magical solutions.” (…) Marco Rubio’s campaign website thunders: “The world has never been more dangerous than today.”

Lee supposes that those remarks will lead to higher military spending and advises his readers to look at the facts first. Those facts are not as bad as suggested. For example, the number of victims in conflicts over the past decades is showing a downward trend. “We must be willing to tell the truth about continuing human progress in a spirit that encourages excitement and engagement. Freed from unwarranted fear, we can work to accelerate the journey toward an even more peaceful, humane world,” he concludes.

It is not only Lee who asks us to look at the world in a way we are no longer used to. The Dutch monthly Militaire Spectator (no 1, 2016 pp. 4-18) has a long read on the increasing global safety over a long period of time (in Dutch). The author, Major Ducheateau-Polkerman of the Central Staff offices of the Dutch Army (CLAS) notices that minister of Defence of the Netherlands Hennis-Plasschaert speaks repeatedly about a less secure world. “Politicians, high ranking officials and the ‘ordinary citizen’, they all seem to think that the world becomes insecure. They also seem to repeat each other.” But “there is no hard evidence for this. On the contrary, there is ample evidence of the opposite.” According to this military expert, the perception of danger is used to get higher budgets for the MoD. Creating fear is a common tool to get a bigger piece of the State’s cake.

Thomas Lee noticed that painting the worst situation is used as a mechanism to attract attention to a subject. Sometimes this is inevitable and necessary; some populations are indeed in grave and dangerous situations. Such as the population in Yemen where a cruel and in the West hardly noticed war is going on. In 2014 the Netherlands sold arms to six countries participating in the Saudi led coalition in the Yemen war, as Stop Wapenhandel and Pax recently wrote in a letter to Dutch members of parliament. The Dutch ministry of Foreign Affairs has promised to investigate if these Dutch weapons have been used in the war in Yemen, but wrote in a recent letter to Parliament that this research will be difficult because 1) the coalition is against external inspections, 2) it is mainly the sale of components. The first argument should raise eyebrows. The Netherlands delivers weapons to countries who are not prepared to give insight in their use? Even not if there are concerns about human rights and violations of international law? The second components-argument is easy to refute, as is shown in a Stop Wapenhandel research report on which the investigation promise is made. The report starts with the identification of coalition-used howitzers, F-16 fighter aircraft, frigates, patrol vessels and tanks of Dutch origin or containing Dutch components. The Dutch government does not have to look for components, it simply has to look for the weapons in which these components are used. And for the cannisters, guns, cannons, and tanks which are firing the provided grenades and missiles.

Thursday 11 februari 2016 between 15:00 – 18:00 the Dutch annual arms trade debate takes place. It can be watched live at http://www.tweedekamer.nl/vergaderingen/livedebat/thorbeckezaal