Dutch arms exports in 2017 are projected as dots on a map published online by Stop Wapenhandel (Stop Arms Trade) from the Netherlands. Eye catching for Asia is the big dot covering Pakistan. Karachi was a major client for Dutch arms in 2017. Which is peculiar for several reasons: First because the Dutch have overall a restrictive arms export policy. And second because the South Asian country is declining as a destination for Western arms at a fast rate. This last development is strongly motivated by the situation in Pakistan and by how the political developments are perceived.

Pakistan has a troubled relationship with its neighbours. The tensions with Pakistan’s main neighbour India on issues such as Kashmir are well known and include maritime disputes. In neighbouring Afghanistan Pakistan is supporting armed opposition for years already, and no end in sight. This is one of the reasons this opposition is so hard to repress. The Pakistan military and its intelligence branch is playing a major role in this. The Dutch, who are selling arms to Karachi, have been contributing substantially to the military campaign to pacify Afghanistan with major contributions from the Netherlands in money, material, training and also thousands of troops.

The internal situation in Pakistan itself is also far from stable. The Pakistani armed forces are neglecting or even ignoring violent opposition or in other cases using excessive force to suppres the opposition. That Pakistan is not able and willing to quell internal Islamist movements has been reason for US Congress to aim for the end of the American Foreign Military Sales program. When this US financial support was removed, US arms were no longer affordable for Karachi.

The debate on the country is sometimes harshly voiced, like by the Republican Congressman Ted Poe: “For years, Pakistan has acted as a Benedict Arnold ally [is a traitor] of the United States. From harbouring Osama bin Laden to backing the Taliban, Pakistan has stubbornly refused to go after, in any meaningful way, terrorists that actively seek to harm opposing ideologies.”

The factual reason for the large dot on the map of Stop Wapenhandel is the sale of two patrol vessels of corvette seize. The export license for the sale has an amount of € 66 million (see table 1). The ships are included in the SIPRI Trade Register database, but not yet in the TIV database (see table 2) for reasons of methodology (to make sure to have the input correctly and once, SIPRI includes arms transfers into the TIV at the moment a sale is finalised).

The sale has been communicated widely in the press, months before an export license was granted. The ambassador of the Netherlands attended the contract ceremony already in June 2017, a sign of political backing for the deal. From that point an irreversible position was taken, a denial of an arms export permission would have been a lost face for the Dutch diplomat. The actual export license was issued by the Ministry of Foreign Affairs in November 2017. Although the sale concerned an export of a major weapon system to an unstable and controversial country, providing the export license seems to have been handled as a administrative formality. 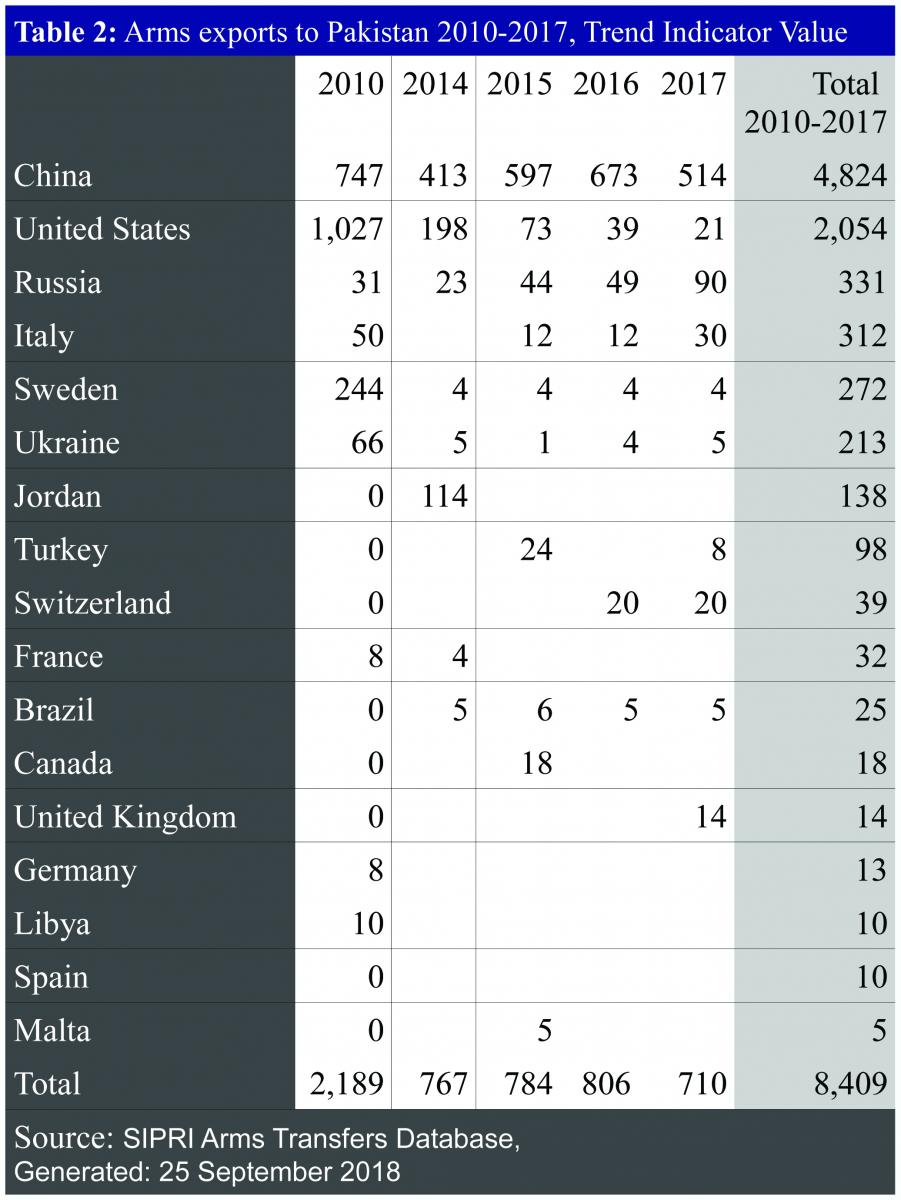 The ships are axe bowed and build at the Damen wharf in Romania. They are based on a design by Delft University, the Dutch Navy, and naval technology institute Marin in Wageningen. The vessels will be based on the Damen OPV1800, but slightly larger (1900 tons).

Damen itself lists ships above 50 meters as naval vessels. The ships for Pakistan will have a much greater length, 90 meters. Pakistan is well aware of this potential and buys the corvette-sized ships reportedly “to recapitalise its surface fleet. Cost is a major factor behind these decisions, corvettes are cheaper to procure and operate than frigates.” The ships will be used eg. for anti surface and air operations, day and night helicopter use, and for intelligence gathering, according to a Pakistani Navy article.

According to the Damen cataloques the OPV1800 is suited to carry a 76mm naval canon; 2 x 20 mm guns; fire control radar; the vessel is fitted with an flight deck, hangar and refueling for helicopter size up to Sea King or NH90; and suited with gun control; fitted with required armament and sensors, the necessary ammunition stores, data/electrical support systems.

Damen has delivered similar OPV1800’s to the United Arab Emirates. Those vessels are armed with a BAE Systems 57mm gun and two Leonardo 30mm guns and a missile launcher for self defence. Thales provided fire control, radar, sensors and combat systems to the Emirates

For the Pakistan vessels there is no information available on the combat systems, fire control and weapons. Normally this information is published in the specialised press. Is it China who will fit the ships with military technology and weapons (for reasons of price and/or alignment) and is this kept confidential?

Pakistan is geographically positioned at the Indian Ocean and provides an entrance to Central Asia. China has (maritime) connections with Pakistan by its Belt and Road Initiative (BRI). Pakistan’s Gwadar Port is a major chain in this Belt. China itself becomes more assertive to defend its interests in the Indian Ocean and a position in Gwadar is helpful for this. China also replaced the US as an important source for Pakistans’ arms. As the nationalist channel for Chinese foreign policy Global Times states it: “There is no military alliance between China and Pakistan, but China’s arms exports to Pakistan are a powerful weapon to safeguard the South Asian country’s military sovereignty.”

To underline the importance of the Dutch deal: the European Union information on arms exports by its member states showed that in 2016 only France had exports to Pakistan higher than € 66m (the value of the license for the ships), followed by Italy with exports for € 22 million. For 2017 the Netherlands will be Karachi’s 3rd largest arms provider, after China and Russia. A naval vessel able to operate the latest helicopters and fitted with a cannon which can be used for air, see and land targets is not only a major weapon platform, it is also a major deal.