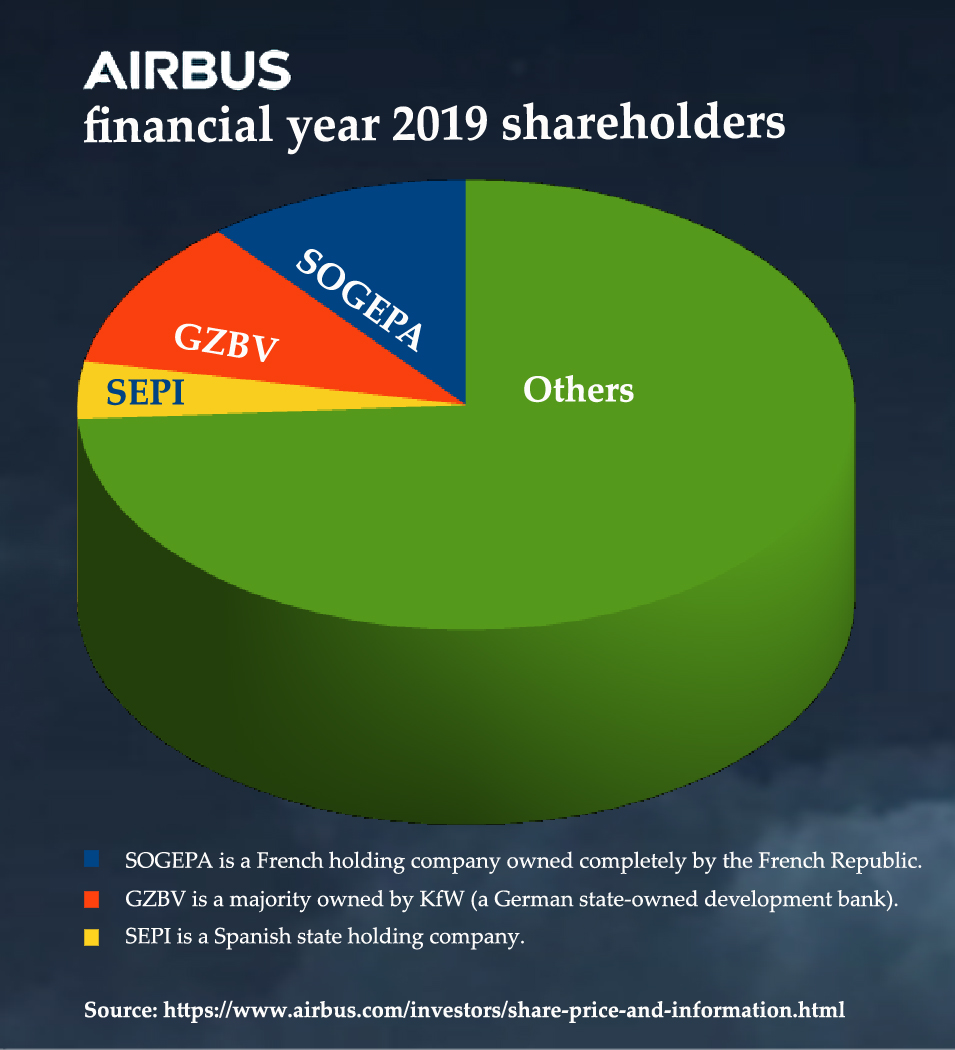 Airbus is a European civil-military aeronautic company based in France, Germany and Spain. It is 26 per cent state-owned (see figure, click to enlarge). For financial and organisational reasons it has its official headquarters in tax haven the Netherlands (see table). Airbus is the worlds largest builder of civil air liners, but produces also helicopters, fighter jets, drones, cybertechnology and military satellites, which makes it the ninth largest military company of the world.

The company is – like many military companies – prone to corruption. Late January, years of investigations resulted in an agreement to pay € 3.6 billion to France, UK and the US to settle multiple cases of bribary. The company also agreed to appoint an external compliance officer for two years to monitor the handling of its defence-related sales and disclosures around the world.

For one case, the UK Serious Fraud Office (SFO) investigation concluded that Airbus failed to prevent persons associated with the company “from bribing others concerned with the purchase of military transport aircraft [C-295] by the Government of Ghana” despite the fact that the contract “contained a declaration of compliance with the OECD Convention on Combating Bribery of Foreign Public Officials in International Business Transactions, as well as a declaration that no more than €3,001,718.15 would be paid to agents in connection with the contract.”

Beside the Ghana case, the US Department of Justice report listed also Vietnam and Indonesia in connection to corruption around purchase of the same plane. In Vietnam “Airbus or its Vendors had paid, offered, or agreed to pay political contributions, fees, or commissions in connection with these sales, in the amount of € 6,150,226.” In the case of Indonesia they did “in the amount of approximately 16,100,000 Euros.” The report concludes that: “Airbus’s gross gain on the sales of the aforementioned C-295s to Ghana, Indonesia, and Vietnam was approximately $165,208,895.”

Airbus also failed to keep records on the sales of US controlled defence articles or defence services, as compulsory. Both the US and the UK reports the bribing of Austrian officials when trying to sell the European Fighter Aircraft (EFA, or Typhoon) to the air force of Austria. The EFA is a joint product of Airbus, British Aerospace and Italian Leonardo. A recent negotiation proposal with Austrian Minister of Defence Klaudia Tanner on reparation or compensation between Austria and Airbus was turned down by Airbus because “demands lack any legal basis, are therefore decidedly rejected and not discussed.”

In the UK the question is raised if leading big industries do not get away too easy with financial crime by arranging a financial settlements. UK SFO director Lisa Osofsky’s remark to BBC that “It’s a very good win for the taxpayer” a somewhat curious view on justice in case of fraud. Journalist James Booth looked into detail to the question of responsibility in an OpEd in the London financial City A.M and notes: “Trials are often long and complicated with defendants who do not fit the profile of the stereotypical criminal”. Andrew Smith of the Campaign Against Arms Trade observed that the settlement: “looks like another case of a major arms company buying its way out of greater legal investigation”.

Currently the main issue for Airbus is the development of new fighter aircraft, the FCAS. But the Frankfurther Allgemeine points to the fact that the German figher Tornado must be replaced first. Will it be Boeing or the EFA consortium to win this double digit billion euro order?

Meanwhile Airbus reports underperformance of the defence and space division in 2019 compared to the previous year. The company gives several reasons: a) the fine of € 3.6 billion; b) failing military orders from the host countries, like the decision of the German Air Force to refused the delivery of two A400M transport planes; and c) the German decision to suspend arms exports to Saudi Arabia.

The announcement of layoffs might as well be a weapon to influence the governments in Berlin, Paris and Madrid to speed up decisions on arms sales, domestic acquisitions and programs and to implement a more relaxed arms export policy. Together with British Aerospace, Airbus has an interest in watering down the German embargo on Saudi Arabia. It has put into question a multi-billion pound deal to sell 48 Eurofighters to Riyadh built by the EFA consortium also including German MTU Aero Engines. The German embargo will most likely be prolonged at its current end date of March 31 2020.