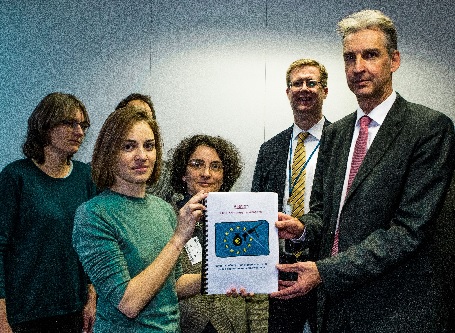 Press release – Brussels January 23, 2018 – Today representatives of the European Network Against Arms Trade (ENAAT) and WeMove.EU handed over more that 142.000 signatures of European citizens to the cabinet of Federica Mogherini, High Representative of the European Union for Foreign Affairs and Security Policy,

in which they appeal to the Members of the European Parliament and to the European Council to halt the inclusion of arms industry research into the new EU budget. No EU money should go to military technology. Research money should go to projects developing nonviolent ways of preventing and resolving conflicts, and in particular tackling root-causes of instability.

The European Commission, under heavy pressure from the arms industry, is planning to budget thousands of millions euros of public money to develop advanced military technology for the first time ever in the Union’s existstence. Although this is presented as ‘defense’, the actual goal of these subsidies is to preserve the competitiveness of the arms industry and its capacity to export abroad, including to countries contributing to instability and taking part in deadly conflicts, such as Saudi Arabia.

The Commission has been pushing for the military industry to become a priority in existing funding opportunities. In 2016 a €90 millions budget over 3 years has been dedicated to fund military research; and this was just the beginning. On June 7,2017, the Commision launched the European Defence Fund, under which it proposes to divert an extra €500 million from the EU budget for research and development by the arms industry in 2019-2020; from 2021 this contribution would go up to €1.5 billion every year. This Fund will also include national contributions up to €4 billion per year in a common basket for the joint development of military equipments by Member States.

All these measures will mean drastic cuts to the detriment of other spending priorities both at EU and national level. The +142.000 signatures are an appeal of European citizens that want the EU to work for peace and not to subsidize weapons.

The European Network Against Arms Trade (ENAAT) is an informal network of groups and individuals who see the arms trade as a threat to peace, security and development, and the arms industry as a driving force behind increasing arms trade. WeMove.EU is a citizens’ movement, campaigning for a better Europe; for a European Union committed to social and economic justice, environmental sustainability and citizen-led democracy.