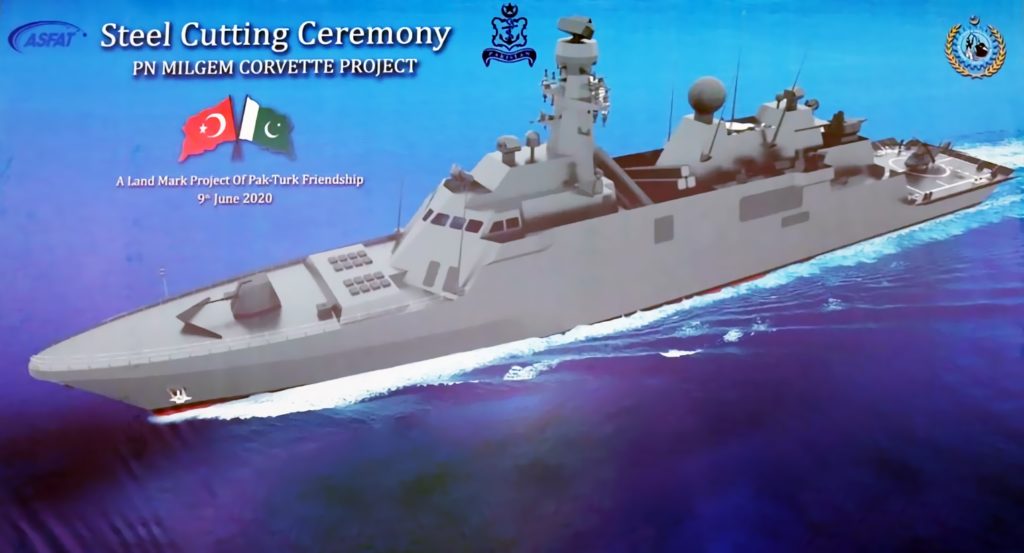 The Dutch government has issued a permit for the sale of military technology for corvettes to the Istanbul Naval Shipyard* with final destination Pakistan. The deal is worth € 46.7 million, which is 5% of average Dutch annual arms exports over the past decade.

The Thales technology includes advanced Smart-S radar (optimised for target designation) and will be assembled onto a corvette sold by Turkey to Pakistan. According to Dutch assesement there are no risks for regional security (criteria 4) and non-proliferation (criteria 6) nor for any of the other criteria of the EU arms export regulation.

The sale was announced on the same day that Turkey was beating the anti-French drums and calling on the islamic world to boykot French products. Dutch Thales is part of the French Thales concern. The ships are outfitted with a range of Turkish developed weapon systems, but also with naval guns from Leonardo/OTO Melara (Italy).

The military technology is sold to Pakistan, but goes first to Turkish Aselsan, one of Turkish largest military tech industries. The corvettes are its first major shipbuilding program, so the deal is strengthening the capabilities of the Turkish defence industry. Considering Erdogan’s Turkey is sending Turkish made drones to Azerbaijan and trying to derail the Libyan peace agreement the wisom of this Dutch contribution can be doubted. But the restrictive policy on Turkey is limited to arms export, not to cooperation with military industry, even if this has more far reaching effects on the long run.

Karachi bought four corvettes in Turkey of the Ada-class. The deal has been called the single highest value contract signed by the Turkish defence industry so far under ASFAT, the Turkish state-owned defense contractor. Two of the corvettes will be build in Turkey, the other two at the Karachi Shipyard & Engineering Works (KS&EW).

The next part of the journey for the naval equipment will be transfer to Pakistan. “The country is involved in a territorial conflict with India on Kashmir. Pakistan also has a complicated relationship with Afghanistan,” the Dutch government writes in a letter to the parliament, but quickly reassures: “Both regions are landlocked, reason the Pakistani navy, the end-user, plays no role in these conflicts.” For those who are not convinced by the Kashmir argument, the Dutch Ministers for Foreign Relations adds that Pakistan already has more capable ships and the new ships will not alter the balance of power. The ships however attract widespread attention in military circles, included a Pakistan Navy press release:”Induction of these ship in Pakistan Navy would significantly add to the lethality of Pakistan Navy’s capabilities and contribute in maintaining peace, security and balance of power in Indian Ocean Region.”

Naval News reports on its website on Pakistani naval acquisitions: “The Pakistan Navy is currently undertaking an important renewal of its fleet, with the procurement of several modern platforms: In addition to these corvettes from Turkey, Pakistan will also commission new frigates from China and OPV from the Netherlands. It is also modernizing its submarine force.” Three countries are mentioned here: Turkey, China and the Netherlands. Pakistan is well connected to Turkey. “Turkey has always stood by its Pakistani brothers on the issue of Kashmir,” writes Turkish Defence Magazine. The close relations between Karachi and Beijing are no secret. They have a common enemy in India. The Netherlands seems to be the strange duck in the pond.

Dutch shipyard Damen sold two corvettes to Pakistan. In the Netherlands the ships are called Offshore Patrol Vessel, which sounds a bit sully, but these ships play a role in anti-ship warfare. The Pakistani Quwa Defence News & Analysis Group mentions they are adapted and designated corvettes (a more capable kind of vessel).

Currently the acquisition of more of these ships is considered in the context of Pakistani plans for a 50 warship expansion of the navy. Former Pakistani chief-of-staff statements suggest the Pakistani Navy could expand its order from Damen Shipyards with 6 additional Yarmook-class covettes.

Author, analyst and former Australian defense attache to Islamabad, Brian Cloughley claims that in the event of a conflict involving India’s Navy, Pakistan “would deploy all its assets to destroy it, and although the [Indian Navy] would suffer major losses, the attrition factor would be the decider.” The retired Director Naval Ops, Indian Navy and Director Naval Intelligence, Cmde Ranjit B Rai stated recently that Pakistan partners with the Chinese navy to jointly deny India access to the Indian Ocean. The Dutch Ministry of Foreign Affairs prefers to close its eyes to the full picture of the conflict.

European Union member states continue to export weaponry to Karachi. Is that to counter Chinese influence? Is that to keep some level of military relations with such a crucial country in the region? Or is it just a way to export military products for the profit of weapon manufacturers and support the domestic industrial base? Whatever the reasons: strengthening Turkish military capabilities and fueling the fire is taken as part of the dealings. It is not because there are no rules to control this trade. It is because there is no willingness to end the exports, even to severe regions of tension.

* The Dutch government letter is not specific on weapon technology, involved industries and ship class. Transparency has its limits. Specifics had to be deducted by the author.