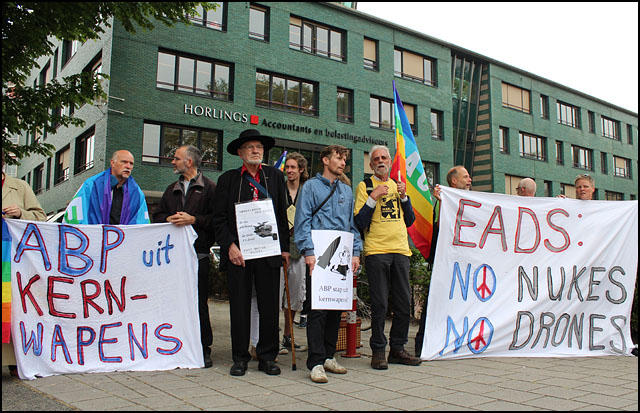 Many pension funds have since ‘green-washed’ their portfolios, saying that they do not invest in ‘controversial’ weapons, while in fact ignoring most arms production – even nuclear weapons.

ABP for example, the government sector pension fund – the largest in the Netherlands and the world’s number 3 – only excludes landmine and cluster bomb producers. Thus, ABP reduces its corporate social responsibility (CSR) to ‘obeying the law’: only excluding arms producers making products banned under the Mine ban Treaty and the Convention on Cluster Munitions.
While ABP bans violators of the nuclear Non-Proliferation Treaty (NPT), it does not exclude companies producing nuclear weapons for ‘recognised’ nuclear weapon states, such as the US, France and the UK.

Others pension funds, such as PGGM, the second largest Dutch fund, with members from the health and welfare sector, take their responsibility more serious and do not invest in controversial weapons, including all weapons of mass destruction. [list of excluded companies]

Of course, the ABP position makes no sense from a CSR point of view: what responsibility do you show when you simply do not do what it is forbidden by law anyway?
Therefore the Dutch Campaign against arms trade is pushing ABP and a few other major funds to reconsider their position on nuclear weapons. That would also be in line with general public opinion, and something probably most (would-be) pensioners would agree with.

One of the main companies involved in the French weapon of mass destruction programme is EADS – the European Aeronautical Defence and Space corporation. Its Astrium subsidiary has been involved in the development, production and maintenance of the French navy’s M4, M45 and M51 nuclear ballistic missile – the latter of which was added to French submarine Le Terrible in 2010. [NB: an M51 test launch in May failed]
Moreover, through joint venture company MBDA, EADS is involved in the production of the air force’s ASMPA nuclear bomb.

With headquarters in tax haven the Netherlands, EADS has its annual shareholders meeting in the 5-star Okura hotel in Amsterdam. Over the past few years a tradition has grown to welcome EADS shareholders with protest banners and to raise questions on EADS policy at the meeting itself. This Wednesday will be no exception.
As a declared nuclear-free city with a Mayor for Peace heading the town council, Amsterdam is not at all happy with this arms business event.