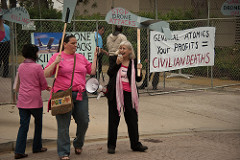 The Dutch air force is in the process of acquiring four General Atomics MQ-9 Reaper drones with ground stations at a cost of € 187 million. Anticipated deployment includes gathering intelligence during interventions/humanitarian operations and the support of civilian authorities.

Dutch GKN Fokker is rewarded for the Dutch acquisition with participation in the production of the Reapers. Which makes the components covertly part of all Reaper drones exports. Considering the fast growing popularity of the drone and the erosion of the US arms export policy this might evolve into a deadly but profitable business.

Armed drones have been around for a long time already, but the use accelerated in the last twenty years. The first modern drone attacks took place in the beginning of this century, for example the well documented 2002 drone attack in Yemen, a country the US wasn’t even at war with. This strike was called “execution without trial,” and was the start of the kill don’t capture doctrine, according to philosopher Mary Calhoun (in: We kill because we can; London: Zed books, 2016). Medea Benjamin of Code Pink underlined this critical position in Drone Warfare (London, New York: Verso, 2013) by citing a former counterinsurgency adviser to top general Petreus. This Lt Colonel John Nagel described the kill don’t capture campaign as “an almost industrial-scale counterterrorism killing machine.”

The Reaper is developed by General Atomics – Aeronautical Systems (GA-ASI) and one of the larger types of drones. It can be armed with four Hellfire-missiles and with guided bombs such as the GBU-12 Paveway II en GBU-38 Joint Direct Attack Munitions (JDAM). Camera’s are fitted, able to read e.g. signs of cars. The drone has become famous and notorious by the elimination of terrorists and the killing of civilians in Afghanistan, Pakistan, Somalia and Yemen.

The MQ-9 Reaper originated from the Predator drone, but has another tail and is bigger. It is called Reaper for a reason: although it is fitted with the same surveillance equipment as the Predator it is “much more of a hunter-killer design. Some have called it the first fielded Unmanned Combat Air Vehicle (UCAV),” or expressed differently: “the primary offensive strike drone for the United States military.”

Unarmed at the battle field

Reaper drones are used by a number of countries (see table), armed or unarmed. The drones are helpful tools during natural disasters, like floods, forest fires and hurricanes. Predator and Reaper drone are also used by the US to control its border with Canada and Mexico to control the movements of people (migrants, refugees).

The Dutch version is “not armed, yet,” as a Dutch newspaper wrote, understanding the self propelling dynamcis of arms acquistions driven by the invisible hand of the Ministry of Defence, and helped by the right to center parties VVD and CDA, who are in favour of fitting missiles to the Reapers. They will be used for Intelligence gathering, Surveillance and Reconnaissance (getting information about enemy forces or positions) together abbreviated as ISR. ISR is a central part of modern warfare and drones like the Reaper fit into this development. In his book Kill Chain (London, New York: Verso, 2015) Andrew Cockburn describes in detail how the position of a SIM-card was picked up by a drone and the owner killed. Unfortunately this was not the terrorist the US Special Forces thought it was, but a campaigner for a candidate in the Afghan parliamentary elections, who was killed because he had the wrong GSM in his hands. Dutch Fokker has a long history connected to the idea of drones. Today’s remotely piloted aircraft like Predator and Reaper exist “because of research and development done in the late 1930s.” The pioneers used in 1937 a Fokker C-14B. Nowadays two Fokker divisions (part of Fokker/GKN) are involved in producing Reaper parts. Fokker in Hoogeveen is participating since 2016 in production and sustainment of Predator B/MQ-9 Reaper landing gear subsystems. Fokker Helmond produces the landing gear systems for the Predator B/MQ-9 Reaper drones. Fokker delivered its first landing gear in spring 2017 and expects to produce 30-50 landing gear systems a year. “GKN Aerospace’s Fokker business unit and Dutch industry will play a critical role in the expanding Predator-series market,” General Atomics warns us on future drones exports.

Fokker itself promotes it position by underlining that it also involves sub suppliers (KNWE and VDL GL Precision). In total about 10 Dutch SME’s are involved in the supply chain. A General Atomics press release cites the CEO of the Dutch Netherlands Aerospace Centre (NLR), Michel Peters: “It’s a great opportunity for NLR to work together with GA-ASI on extending the existing European regulations on RPA usage in civilian airspace.”

Dutch Royal Ten Cate was mentioned earlier (2013) as producer of airframe parts for the Reaper drone. The company reported: “At the beginning of 2012, TenCate Advanced Composites in the United States of America received a Supplier Excellence Award from General Atomics Aeronautical Systems. (…) TenCate has supplied composite prepregs for this company’s unmanned vehicle system programmes.” But since that report it is silent around the relationship between the Dutch company and General Atomics.

One of the other companies working with GA-ASI on the MQ-9B is European missile producer MBDA (having a financial holding in the Netherlands). But GKN Fokker is the main beneficiary of the Dutch acquisition.

Crucial for Fokker’s position is its knowledge of composite-based matériel, making the aircraft light, expanding the endurance and flight range. But the cooperation is also the result of an anticipated Dutch industrial and regional benefit obligation associated with the potential procurement of the drones by the Dutch armed forces. A quid pro quo mechanism with similarities to a mechanisms formerly known as offsets and compensation and nowadays often called industrial participation. General Atomics and Fokker “have been working together for several years to offer Predator B to the Dutch Armed Forces.” The position for Fokker as contributor to the Reaper program has a strong link with Dutch MoD acquisition policy.

The landing gear is made by Fokker for armed and unarmed Reapers; for Reapers used by the French in Mali and for those used by the US in Afghanistan. The drones will be assembled in the US and the US will make the final decision on re-export. This collaboration by Fokker in the program opens a box of questions. Is India a problem as destination, because of its conflict with Pakistan? Is the United Arab Emirates, one of the most active in the Yemen war, acceptable for the Dutch government as an export destination? Or is The Hague simply hiding behind the formal argument: ‘we will not control our allies and the US has its own arms export policy,’ closing the box of questions by one sweep? This hide out is a convenient position for the Netherlands, because 72 per cent of all Dutch military exports concern components for larger weapon systems.

The US deploys its Reaper drones to conflicts like Ukraine and Yemen and in the War on Terrorism. Those US drone deployments are notorious and destabilise countries and regions. Does the Netherlands agree with this use of armed drones? Or is the Dutch government hoping nobody will ever ask the question if Dutch Fokker products are meant for the killing machines.