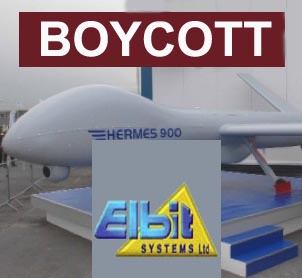 Next Thursday (9 June) arms dealers and government officials meet in Amsterdam for the third annual Netherlands Offset Conference. This conference is about orders foreign defence corporations are obliged to place with Dutch companies when the Dutch military buys something from them (so called ‘compensation orders’). For 445 Euros participants can network and listen to speakers from Dutch and foreign companies at a venue that is kept a strict secret.

Among the foreign companies at the conference are Lockheed Martin and Northrop Grumman, the largest respectively fourth largest arms producers in the world. Both are heavily involved in nuclear weapons development, production and maintenance – among many other things.

At least as controversial is Israeli company Elbit, which has a representative on the speakers list. Elbit in various ways contributes to the repression of the Palestinians:

With the ‘advantage’ of having battlefield experience, Elbit systems are sold to many other countries as well. Elbit also provided technology for the US-Mexico border wall and drones for surveillance by the Border Patrol on the Arizona-Mexico border.
Elbit provided the Dutch military with advanced Battlefield Management Systems for tanks and armoured vehicles. And that’s why it is on the list of companies that have to place compensation orders with Dutch companies.
In the last few years several financial institutions decided to divest from Elbit. Because of its involvement in the construction of the separation wall the Council of Ethics of the Norwegian Government Pension Fund “considers the Fund’s investment in Elbit to constitute an unacceptable risk of complicity in serious violations of fundamental ethical norms.”

Last year, the Offset Conference was held in De Groote Club, at the Dam square in Amsterdam. Campagne tegen Wapenhandel organised a small picket line. This year the venue of the conference is only “provided upon registration” by organising company Finca Defence Marketing. Makes you wonder what they are afraid of.

Answering questions from the Socialist Party in the city council about the Offset Conference, (then) interim mayor Lodewijk Asscher last year voiced his disapproval of arms fairs and conferences in Amsterdam, following the line of his predecessor, fellow Labour Party-member Job Cohen. He said that “organising such conferences is contrary to the Amsterdam approach against aggression and violence” and therefore “the municipality believes it is undesirable that this conference is held in Amsterdam.” They would voice their opinion to the organisers and the venue, but, as Asscher added, “formally there are no grounds to stop such activities.”

With the protest against the last edition, the unwanted media attention it got and the mayor denouncing the conference, the organisers and participants must have felt unwelcome in Amsterdam. At least so unwelcome that they hide their meeting place this year, proving once again that their business is a shady one indeed.