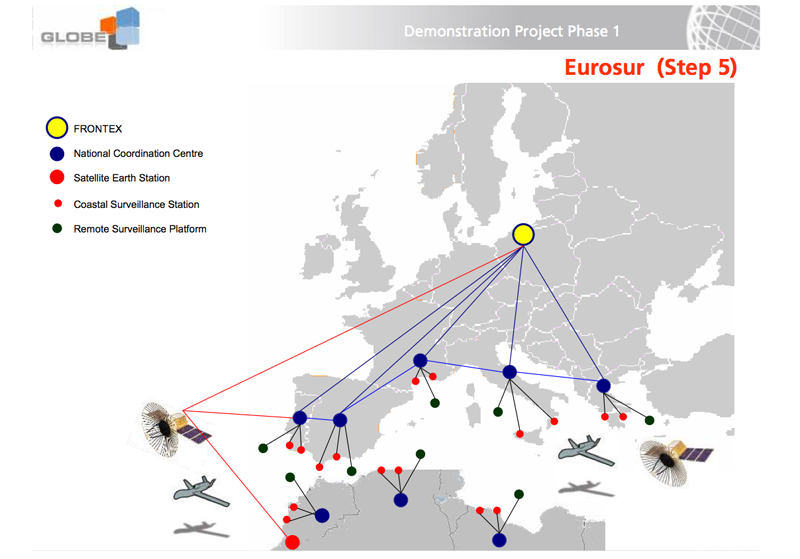 Just one week after the dramatic events off the coast of Lampedusa, where more than 300 refugees drowned when their boat sank, the European Parliament approved the operating rules for Eurosur, the European border surveillance system. Eurosur provides in the exchange of real time images and data between EU member states and the EU border agency Frontex, gathered through surveillance of the Mediterranean using UAVs (‘drones’), ships and satellites.
Eurosur is presented as a project aimed at rescueing migrants. In reality, it’s primarily task is stopping migrants from entering the European Union. Once again, the military industry, involved in Eurosur through Research & Development-projects, finds profit opportunities in the walls of Fortress Europe.

The tragedy at Lampedusa has been far from the only deadly result of the militarization of the Mediterranean borders. Over the course of the last twenty years, more than 17000 persons died attempting to reach Europe. On Monday 30 September, thirteen migrants drowned near Sicily.

While these recent tragedies once again put the spotlight on the horrific consequences of the European migration policies, the reaction from the EU and European governments has been more than disappointing, if not inadequate. The European Commission used the opportunity to push EU countries to vastly increase the resources of Frontex, the EU border control agency. The commission has been talking about expanding Frontex for at least three years, but now EU home affairs ministers voiced support.

Dutch State Secretary for Security and Justice Teeven said that the Netherlands are willing to put more ships, planes and personnel at the disposal of Frontex, to combat illegal immigration from North Africa to Europe. Already the Netherlands is participating with ships and personnel in several Frontex operations and has some fifty border guards available for rapid border intervention teams.

Experts, human rights organisations such as Amnesty International and Green MEPs warn that a further militarization of the borders will only increase the dependency on human trafficking and will result in more deaths. Hein de Haas, co-director of the International Migration Institute (IMI) at Oxford University, wrote that “it is the very tightening-up of border controls that forces migrants to take dangerous routes and makes them increasingly dependent on human traffickers to get across the border.” He called it “the real scandal” that “governments and migration agencies such as Frontex shamelessly abuse tragedies such as the disaster off the coast of Lampedusa to invest even more money in “the fight against illegal migration”.

While migrants die, the military industry sees a profit opportunity. Apart from direct sales of equipment for border security, arms producers have seen the financing of a lot of research projects to develop new products for border security, through the European 7th Framework Programme for Research and Development. In December the successor of this program, ‘Horizon 2020‘ will be launched, again with a budget line for security.

The European Commission stated that “Eurosur is conceived as a process which will never stop, which will always be further improved.” So, Eurosur and Frontex will remain sources of profit for the military and security industry. The industry which lobbied for the Eurosur-projectis now pushing the European Commission to allow private security companies access to maritime border surveillance data so that they can sell and use it, thereby proving once again that turning human suffering into profit opportunities is at the core of their business.