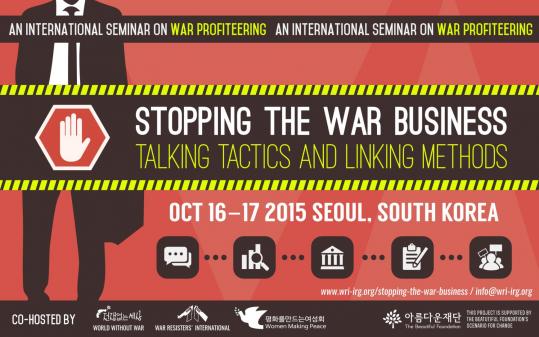 16-17 october 2015 – Seoul South Korea – Disrupting war profiteering takes a whole range of activities, from research, lobbying and legal challenges to mobilisation, direct action and creative campaigning techniques. Stop Wapenhandel will give a workshop on Finding facts and figures for campaigning against arms trade.

For antimilitarists, disrupting war profiteering means knocking out the economic pillars that make war inevitable. It goes far beyond the arms trade (although that is an important part of it), and includes all those who fund and profit from war and militarisation.

This seminar will provide a space for activists using a whole range of different methods to gather together, learn how a spectrum of tactics interlink and help each other to be more effective. It’ll answer questions like ‘How can we make our direct action more strategic using research? ‘How could a public campaign support our lobbying work?’ ‘What tools or methods can help my campaign be more effective?’

This international seminar Stopping the War Business will be held in Seoul, Republic of Korea, 16-17th October. The seminar is jointly coordinated by World Without War in Korea and international antimilitarist network War Resisters’ International.

A global general overview of all arms trade does not exist. Sources are often incomplete. Databases do not cover all deals or all kind of arms. Information is in general only available after a contract is closed. This makes it difficult for campaigners to prevent specific sales.

As an introduction on how arms trade works, the No-Nonsense Guide to the Arms Trade by Nicholas Gilby is very readable and still available.

In many countries, the government publishes an annual report on arms export. In the EU this is even compulsory.

Arms companies and arms fairs have websites to promote their products

More information can sometimes be obtained through parliamentary questions, journalist investigations, Freedom of Information procedures, questions at shareholders meetings and scrutinizing pictures of war and violence.

For the recognition and tracing back of arms being used, Omega Foundation can be of great help.

The UN invites governments to report their arms transfers as a trust-building and conflict-preventing method. Participation in the UN register is voluntary.

Under the Common Position on transfer of military technology and equipment EU countries are obliged to report on their arms export licenses and transactions to the European External Action Service (EEAS). The EEAS reports these figures annually.

Media, notably military media, publish on arms transfers, tenders and the use of arms. Two examples of online magazines:

Campaigning against arms trade investors is popular because there is a direct consumer relation. Research possibilities differ from country to country, depending on transparency of investment figures. Campaigning for transparency and an ethical investment policy might be a first step.

A good publicity tool is linking an arms company in which investments are made to an actual arms deal or the use of weapons by that company. Some countries have online databases where consumers can check their bank/fund/company against several ethical topics. See for example http://eerlijkegeldwijzer.nl/bankwijzer/

Some years ago Belgian activists opened a mock ‘dirty bank’ which openly promoted high profits based on arms trade, air pollution and child labour companies. In the one day of its existence it managed to get a lot of public attention.