April 2018 the US promised Tapei technology to be used for a domestic Taiwanese submarine program. Only technology, because the largest superpower of this era has no capacity for building diesel submarines; it sails only subs with nuclear engines. The major builders and exporters of non-nuclear submarines are located in Europe. Nine nations have diesel submarine building capabilities, all EU/NATO countries except Russia:

In the period 2013-2032 just over 300 submarines are globally constructed, planned, and projected. That is an average of fifteen a year, included those for China, Japan, Russia and the US who are all building them domestically. It is clear that the market is relatively small for so many suppliers.

However, the Netherlands seems on a path to reestablish its own capacity. Dutch shipbuilder Damen established contacts with SAAB in Sweden to cooperate on this. Cost estimates for the project run towards € 4 billion. To compare, the cost of the submarines planned by Norway and Germany are roughly estimated at € 280-560 million each.

This much cheaper submarine project will force the Netherlands government to decide how to continue. The Netherlands is successful on the export market in over twenty countries worldwide with small and frigate size surface vessels and with Damen SY facilities. Now the shipbuilder wants to add submarines to its portfolio. But it also wants to build new surface vessels for the German navy. Now here’s the deal: During a recent meeting between German and Dutch national armament directors and defence industry representatives the Germans have most probably proposed that Damen takes the lead in the German frigate program and that in return the Dutch will buy German submarines. The design will be done by Damen, but the ships will be built in Hamburg and jobs are thus secured for Germany. 70 percent of the revenues stay in Germany. For Germany, an additional advantage will be that this will weaken the position of SAAB on the submarine market.

Defense News cites officials who say that: “seeking avenues to bring the Netherlands in alignment with the German-Dutch sub buy may make sense in the spirit of coordinating such acquisitions Europe-wide.” So it will be in line with an European arm isndustry consolidation policy. Moreover it fits into the German policy which declared submarines to be a key field for German naval industry which leaves surface vessels for import from European or global producers.

If this is the deal to be made, the dream of Dutch subsurface vessel production will burst twofold: the German submarine is not of the expeditionary size of the Dutch navy ambition and there will be no new ‘made in Holland’ submarine construction capacity build – almost from scratch.

But the good news for the armed forces is that the MoD spares billions on its acquisitions. His gives new opportunities to Damen which is already lobbying for more naval orders to direct the saved billions of euro’s to the shipbuilder for new projects.

The current German Norwegian future submarine program is based on the type-212CD-class submarine, developed jointly between Italy and Germany. Norway already stated that new participants have to be quick because the door is closing for adaptations on the configuration.

As Germany offers a bigger variant for the export market the knowledge to expand the boats already exists. Recently India bought this 214-class export version of the 212-class, without the un-magnetic steel hull, but with greater diving depth capabilities. The 214 is already in use with South Korea, Greece, Portugal and Turkey and even bigger version is sold to Israël. Thyssen Krupp Marine Systems advertised it as a capable boat equipped to undertake missions ranging from operations in littoral waters to ocean-going patrols. It can be used for anti-surface ship and anti-submarine operations, intelligence, surveillance and reconnaissance tasks and Special Forces operations. Also on SOF the Dutch seem to aim for more robust capabilities.

It is often forgotten in the stories on the German U-boot export success that the ships are among the most dangerous weapon systems around. Submarine proliferation is seen as a serious threat to security by Western Ministries of Defence. Torpedo’s can be used to covertly sink vessels, but the torpedo tubes probably will be more often used to bring Special Forces ashore for secret missions. Both the 212 and 214-class are capable of doing such operations.

Subs proliferation is not limited to Europe. French and Spain jointly exported its latest diesel boats to Brazil, Malaysia, India and Chile and the Naval Group develops a diesel electric submarine for Australia. Russian submarines are present in the fleets of a number of countries from China to Iran. China is the newcomer and exported recently to Bangladesh, Pakistan and Thailand. Creating even more competition on that market, involving enormous government expenditures and for the benefit of national industrial and military interest, only endangers an already volatile world. 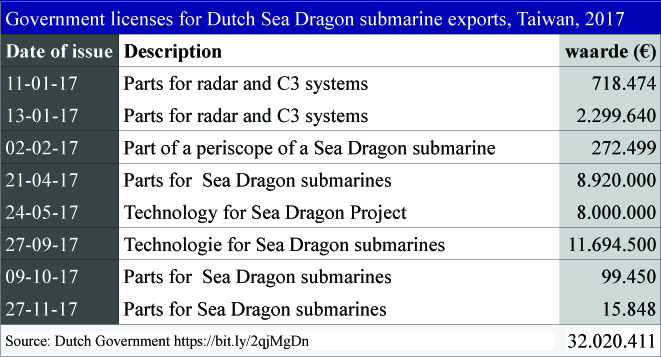